Celebrating the Ages on a Maine Island

Back in 2007, Philip Conkling, Louis Cabot and I were down on Great Gott Island for an afternoon, visiting our friends, Tina and John Gillis. It was a lovely summer day and all seemed absolutely right with the world.

We were sitting on their deck when I saw these girls skipping their way across the field. I grabbed a telephoto lens, waited for just the right moment, and that’s really all there was to it. It was icing on a charming cake when one of them started doing cartwheels.

But even as they frolicked their way past us, I was struck by the juxtaposition of youthful exuberance against the aging houses down on the bar, not to mention the old cemetery.

You see, the cemetery was, in a way, my reason for being there in the first place.

One of Tina and John’s two sons lies buried in this small island cemetery. I was soon to return, solo, to Gott’s to absorb the feeling of the island and to make photographs to accompany Tina’s writing in a forthcoming book about his life, island life, loss, death, and renewal.

I felt a huge sense of responsibility, and while honored to be participating in this intensely personal project of Tina’s, I was daunted by the task of living up to her faith in me. The story she had written is extraordinarily powerful and I really wanted to do my best.

In the course of those few days when I returned, I spent quite a bit of time in that cemetery. I needed time with her son and his neighbors. I have always loved cemeteries, but this one became very special to me, as did the family, the small community and the island itself.

But, of keenest recall is the sense I had while there of the fleeting nature of our lives. The life and death of Ben Gillis was, ultimately, what had brought me there, and, once aboard and engaged in my absorption, I became uniquely aware of, and receptive to, the indicators of the passage of time on this beautiful little Maine island. With every step and with every sighting, there was evidence of life and death thrown into sharp contrast.

My characteristically over-active imagination was at work, of course. My days there were remarkable in that way. I can’t say that I saw ghosts, yet there was the almost overwhelming presence of those who had gone before. Young Ben Gillis, the old lady who burned to death in her house on the backside edge of the island, generations of the Gott family, the late poet and author Ruth Moore, in whose former home the Gillis family now summers — they were all there, all around me, with me, every minute. The silence there was filled with a great many faint whispers.

Time rolls on, tides come and go, cemeteries slowly fill and children frolic. We all have our final rendezvous ahead, but in the corporeal now, we have each other and we all share the brief sentient miracle of our momentary place in the ages.

Thank you, dear Tina, for including me in your island family.

The book, Writing on Stone, by Tina Gillis, is available if you write to me c/o Ralston Gallery. It’s a very powerful story. 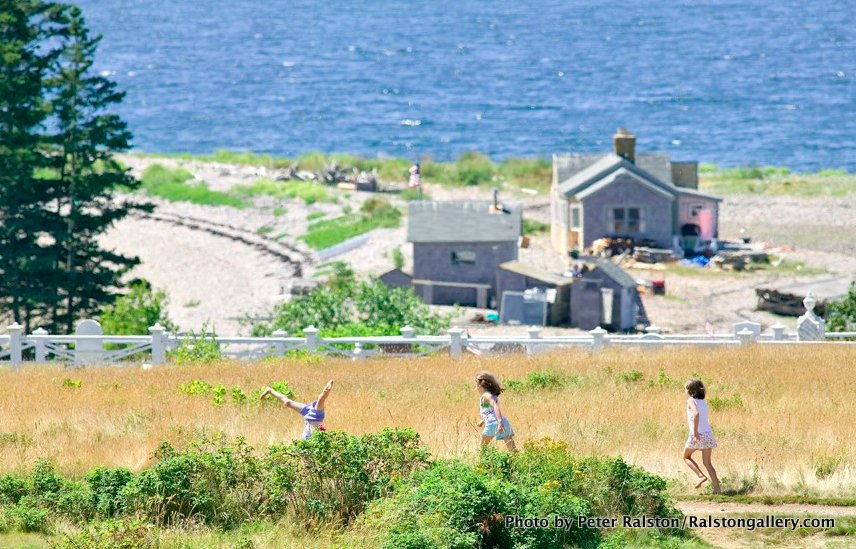 Photos of Celebrating the Ages on a Maine Island 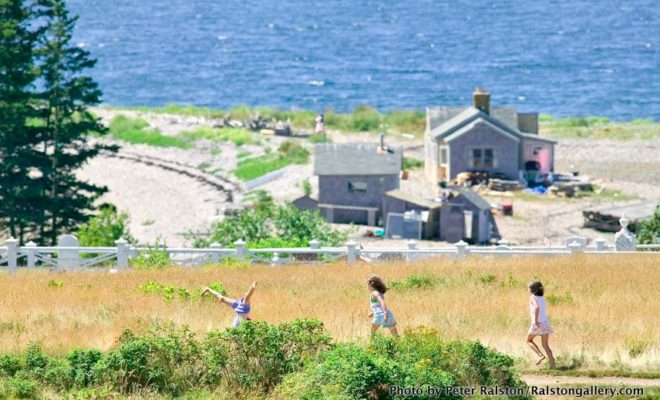