125 Years of Building Boats and Families on the Thorofare

Painted white with an orange boot top, a blocky white cabin, and the name Pete carefully outlined on its rounded stern, the latest boat built in the shop at the J.O. Brown & Son yard on North Haven Island measures only about 12 inches on the waterline.

But as Foy W. Brown lovingly holds Pete in his hands, he is as proud as he has been of any of the yard’s previous projects, including fine yachts and fishing boats. That’s because Pete was built by Foy’s five-year-old grandson, Cyrus. If Cyrus chooses to continue in the profession he will be the sixth generation of his family to build boats in this island-based yard.

On July 13, 2013, the iconic boatyard will celebrate its 125th year as a family-run business. Special events include an open house from 11 a.m. to 5 p.m., with live music provided by the North Haven band “Toughcats.” The North Haven Historical Society will have a display about the boatyard’s history, and a selection of Brown-built boats will be tied up at the dock for inspection. The event is open to the public; for more information call the boatyard at 207-867-4621 or click here to visit them on Facebook.

Few other boat-builders in Maine can boast such continuity. “We are teaching him. He comes down with his father all the time,” says Foy W., proudly holding up another one of Cyrus’s model boats, this one painted red. “If Cyrus grows up and wants to do this here,” he adds waving his hand around the shop floor, “then it will be here for him.”

Housed in several buildings sprawled haphazardly over an acre or so of land sandwiched between the waters of the Fox Island Thorofare, the ferry landing and downtown North Haven, the yard is a physical and spiritual landmark both for locals and for passing boaters. Today two generations of Browns maintain docks and moorings and store and care for over 150 boats, in addition to selling fuel (for boats, houses and cars), lobsters, and an assortment of hardware items, ranging from lobster buoy lamps to flashlights, tools and light bulbs.

Perched on granite pilings over the water, the large red-frame building that James Osman Brown constructed in 1898 was built like a ship, with huge hackmatack hanging knees holding the rafters. Brown modified the beams to accommodate taller boats and installed a floor that drops down to allow vessels to be launched directly into the water. Photos taken over the years show that the shop has changed little since then.

By 1901, according to family historian Vonie Brown, sixteen people worked in the yard. In the early 1900s, the yard branched into motorized dories and larger launches and then, in the 1950s and 1960s, into sturdy, commercial fishing boats. Vonnie Brown compiled a list of all the boats built there, and the family has added to it. The total comes to well over 100. In recent years much of the yard’s work has been on fiberglass boats, finishing off hulls or repairing them.

While the men have kept the large red-frame shed humming with boat work, women in the family have run the back office, as well as helped with boat projects. The founding Brown’s great granddaughter Kim Alexander, 56, maintains the books. Her son Adam, 30, has been working with her to improve the privately held company’s management and record keeping. He has set out to remove some of the clutter and modernize the yard operation. “We would be called hoarders, if we didn’t have so much property,” he says with a smile.

Other modernizing projects include the construction of a new pier alongside the shop. The company received a $240,000 grant from the state’s Working Waterfront Access Protection Program to replace the old wharf with a wider and longer structure. Prock Marine will begin the work this fall. Adam and his cousin Rachel Brown would like to restore a nearby wharf into a marina. Part of that wharf housed a family-run restaurant for 24 years before it closed last year.

Other family members working for the company include Linda Crockett, who works in the store. She has been around the yard all her life. “I’ve never been anywhere else,” she says.

Then she adds a sentiment shared by many of her relatives: “It’s where I’ve always wanted to be.” That dedication to a place and a way of life have kept J.O. Brown and Son, Inc. in business for 125 years — and bode well for the next 125.

A longer version of this story will appear in the Summer 2013 issue of Maine Boats, Homes & Harbors magazine, available in print and in a digital edition. 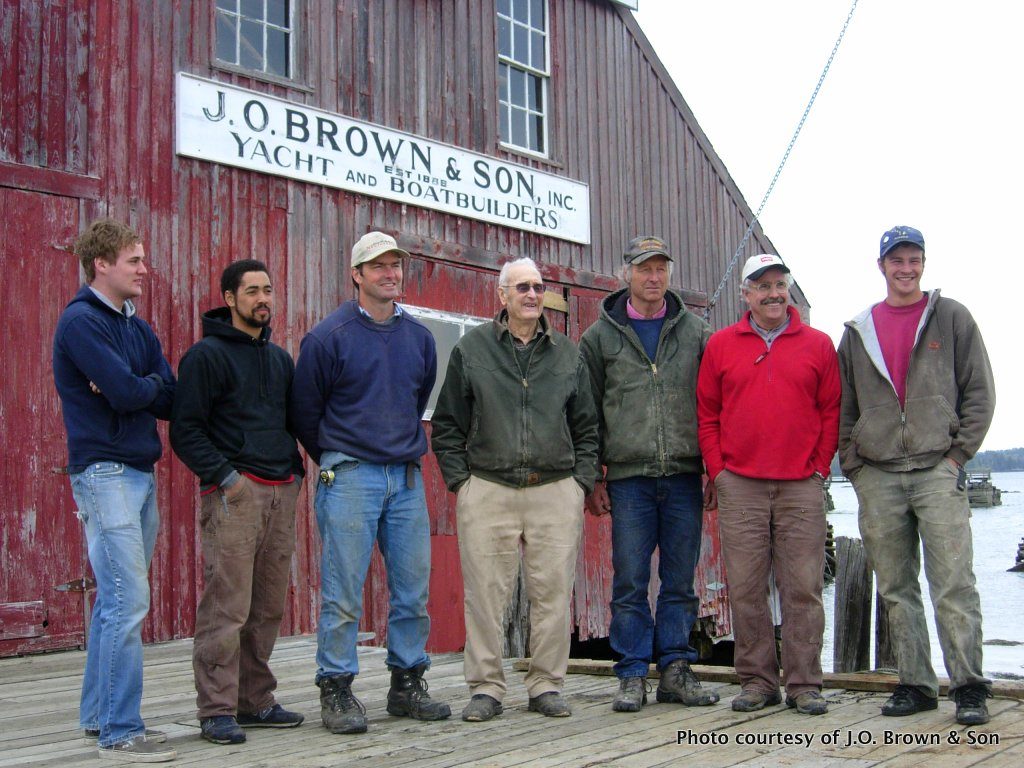 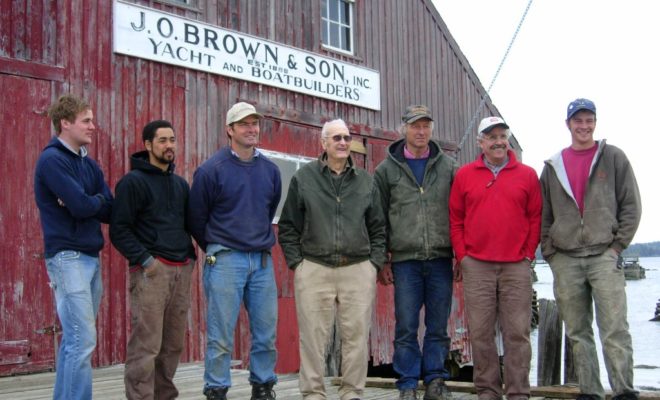