If you’re looking for a one stop shop to answer all things billfish, you’ve come to the right spot. Fishing for these beasts of the deep is among the most exciting things you can do on water.

While they may look similar to the untrained eye, there are a few major differences between these species that make all the difference when trying to hook one up. Below, we share everything you need to know when putting these species head to head- whether marlin vs swordfish or sailfish vs marlin, we’ve got you covered.

Marlin vs Swordfish vs Sailfish: What is a billfish?

Billfish are some of the most advanced species on the planet. Highly migratory, billfish spend their lives in a constant state of movement, making their way from to tropical breeding grounds in the winter, and back to subtropical feeding grounds in the summer. They are located in every ocean, and some have even been tracked swimming across the entire Atlantic.

All billfish, whether swordfish vs marlin vs sailfish, have the iconic “sword” coming off the front of their body. Also called a rostrum, they use it to slice and stun their prey, making for an easy snack when they circle back around to finish the job. All billfish have advanced swim bladders that allow them to change depths rapidly without exerting a ton of energy. Some species like swordfish frequent depths around 1,500 feet deep during the day time, so it’s important have a good knowledge of the water column when fishing for them.

Where can I catch billfish?

All billfish reside in deep water. A good place to start is close to the edge of the continental shelf – the place where the relatively shallow water around land drops off into the deep blue abyss of the open ocean.

They frequent the continental shelf drop-off where ocean currents upwell nutrient rich water. These areas contain high concentrations of baitfish, and the billfish are all over them. You can also find them closer to shore around underwater seamounts and other seafloor features that attract schooling baitfish.

The migration patterns of billfish rely greatly on water temperatures. They’re able to anticipate the seasons and make the move to better feeding and breeding grounds depending on the time of year. Based on location, season, and proximity to ocean currents lets experienced billfish anglers predict their location with sometimes pinpoint accuracy.

A “grander” blue marlin caught in the Gulf of Mexico far offshore from Matagorda on Captain Clayton’s overnight fishing trip.

What are the differences between Marlin vs Sailfish vs Swordfish?

Understanding the differences between these apex pelagic ocean predators is the key to knowing how to catch them. While they’re all relatively similar in appearance, the behavior is often their most defining feature.

Marlin vs Sailfish vs Swordfish

Marlin are widely regarded as the most prized gamefish species in the ocean. The largest species is the black marlin that resides in the Pacific and Indian Oceans, and can reach lengths of 15 feet and weigh over 1500 pounds. In the Atlantic, blue marlin are king, reaching lengths up to 13 feet and weighing over 1300 pounds.

The main defining features of a marlin is its dorsal fin. The fin is smaller than the other species of billfish, and connects to the spine along a soft ridge. Their bills are often shorter and more rounded than the bill of a swordfish or a sailfish.

Fishing for marlin generally means taking a boat ride out to the continental shelf or beyond. In some locations like Cabo and Hawaii, this could be a short boat ride. In other places like Texas, this could mean an overnight trip.

The best marlin lures are those that create a lot of disturbance in the water when trolling. This typically takes form of a large plastic bulb with a silicon or rubber skirt like a squid’s tentacles. Marlin are highly aggressive predators, and even the vibration and noise from the boat can attract them to your lure.

Swordfish vs Marlin vs Sailfish

Swordfish are another highly sought after gamefish from the depths. They are easily identified by their dorsal fin, which protrudes up from their spine almost like a shark’s. Their bill is also the longest in proportion to their body out of the other billfish.

Swordfish can reach lengths of 15 feet, and weigh over 1,400 pounds. They can tolerate a much larger temperature range than the other billfish, allowing them to dive to depths of 10,000 feet under the ocean’s surface.

Swordfish descend much deeper than other billfish species, often spending their days in waters around 1800 feet, and ascending into shallow water to feed during the night. If targeting swordfish during the day, a common technique is “deep dropping”. Deep dropping for swordfish can be done on conventional heavy tackle, using a variety of squid-like lures, but the use of electric reels has been growing in recent years. Deep dropping involves dropping your lure down to extraordinary depths, and the assistance of an electric reel helps a lot when reeling in thousands of feet of line.

Sailfish vs Swordfish vs Marlin

Sailfish are generally considered the most accessible of the billfish species, depending on your location. If the ride out to the continental shelf is too long, you can target sailfish a bit closer to shore. This is a main difference in blue marlin vs sailfish for example- blue marlin are usually found much further offshore.

They are characterized by a large dorsal “sail” that runs the entire length of their back. The swordfish is the only billfish that’s been observed hunting in groups, using their large sails and bills to herd prey into a “bait ball”. They then take turns darting in and out of the ball, scooping up the bait stunned by the bills of the other sailfish.

Catching sailfish is mostly done in the same manner as marlin fishing. The vibration of trolling plugs behind the boat mimics the disturbance of injured prey, and the sails attack them ferociously. Another one-of-a-kind technique is kite fishing. A kite is attached to a reel or an outrigger and released behind the boat. A lure (bait or artificial) is rigged to the kite and skates along the surface of the water mimicking a sailfish’s favorite snack – a flying fish. Once the sail bites, the line disconnects from the kite, and you’re ready to start reeling.

Looking for a swordfish, sailfish, or marlin fishing trip?

Experienced guides have all the gear and experience you need to catch the billfish trophy of a lifetime. A good rule of thumb for gauging the possibility for catching billfish on a charter is how far offshore you’re going, the time of year, and location. If you’re looking to plan a billfish trip, contact us and we can recommend the best location and guide for the season. 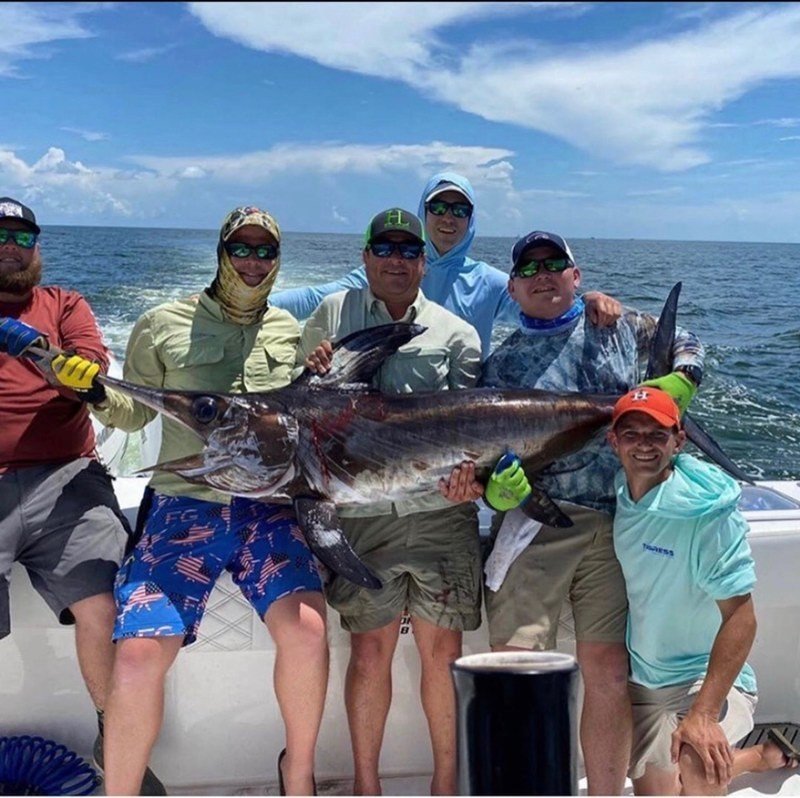