The Dania Cut-Off Canal is located in Fort Lauderdale, FL. Port Laudania is located along this channel, close to the mouth of the canal that leads into the Stranahan River.

There are several small-craft facilities in the vicinity of Port Laudania.
A yacht basin is in the canal at Dania, 1.7 miles from the waterway has water, electricity and a 20-ton lift available; hull and engine repairs can be made.
Navigation:
Click the “Map View” button above to see a chart of this location.
Port Laudania, just south of Port Everglades, is used by small ships handling general cargo and heavy equipment. The 3.1-mile route from Port Everglades entrance to the port is through the main channel, thence southward for 1.8 miles in the Intracoastal Waterway and westward for 0.9 mile in the Dania Cut-Off Canal to a 540 by 310-foot turning basin on the north side. Due to the size and draft of the commercial vessels calling at Port Laudania, the center of the channel in the Dania Cut-off Canal is generally required for safe navigation. To prevent dangerous meeting situations, Security calls should be given by vessels over 50 feet in length or over 7 feet in draft on VHF-FM channels 13 and 16 prior to transiting the Dania Cut-off Canal. In 1983, the reported controlling depth from the Intracoastal Waterway to the turning basin was 5 feet.
An overhead power cable across the Dania Cut-Off Canal has a clearance of 130 feet.
An unmarked rock awash extends about 45 feet into the channel on the south side of the canal about 0.8 mile above the entrance. 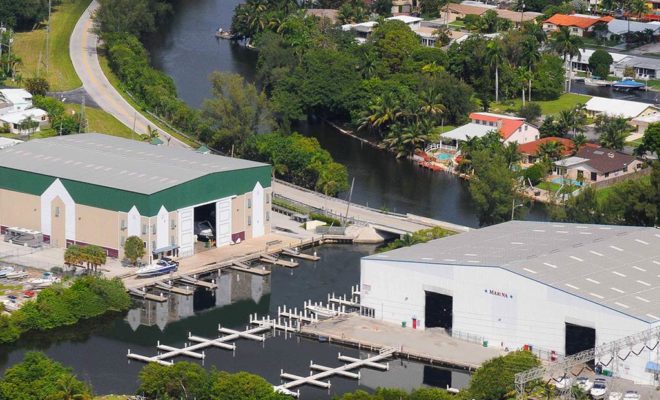