Many marina piers are along Kent Island Narrows and on the north side of Wells Cove. Complete small-craft facilities are available in this area.
Navigation:
Click the “Map View” button above to see a chart of this harbor.
Kent Island Narrows entrance is at Mile 4.0S, Chester River. A marked channel, leads from Chester River to Prospect Bay; the chart is the guide. In 2010, the controlling depth was 3.9 feet (4.8 feet at midchannel). Very heavy traffic can be expected through the channel during the summer months, especially on weekends.
The State Route 50/301 highway bridge over the narrows has a fixed span with a clearance of 65 feet. Immediately south of the fixed highway bridge is the MD ROUTE 18 (old State Route 50/301) bascule bridge with a 48-foot span and a clearance of 18 feet. The bridgetender monitors VHF-FM channel 16 and works on channels 13 and 68; call sign KXE-254. The nearby overhead power cable has a clearance of 85 feet. Temporary mooring areas for vessels awaiting bridge openings have been established by the State of Maryland on the west side of the channel about 50 yards north of the bridge, and 100 yards and 650 yards south of the bridge.
Two detached nearly parallel breakwaters, 700 and 1,500 feet long in a northwest-southeast direction, are about 0.3 mile southward of the highway bridge crossing the narrows and about 0.1 mile southwestward of the channel entrance to Wells Cove.
Wells Cove, on the east side of the narrows 0.4 mile southeast of the bridge, has general depths of 1 to 5 feet. A marked dredged channel leads to a basin in the cove; in 1966, the controlling depths were 6 feet in the channel and basin. 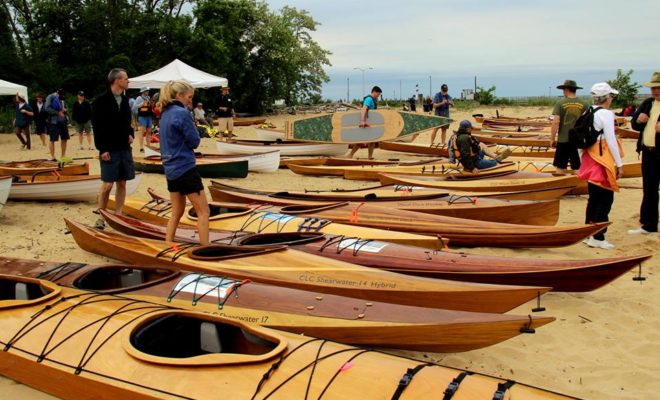 OkoumeFest: A Boatbuilder Rendezvous on the Chesapeake

It’s a springtime tradition: once the water of the Chesapeake Bay is warm enough to… END_OF_DOCUMENT_TOKEN_TO_BE_REPLACED