The bars and shoals surrounding Chatham Massachusetts make it a treacherous area to navigate. Consequently, during the late 19th and early 20th century Chatham had three active lighthouses and four lifesaving stations. Today Coast Guard Station Chatham is equipped with three 42-foot rescue boats which were specially made for conditions in Chatham. Two are kept at the fish pier and one in Stage Harbor. The station also has a 27-foot outboard powered vessel designed to operate in low water conditions but not in surf. 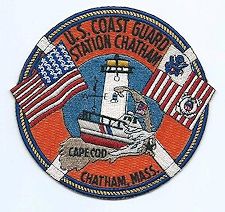