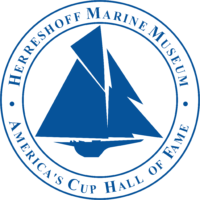 Designed and built in 1903 by America’s greatest naval architect, Nathanael G. Herreshoff, Reliance was a yacht like no other. A marvel of her time, Reliance’s topsail yard towered nearly 190 feet above the water, with sails stretching 202 feet from the bowsprit to the boom’s end. Many said Reliance, carrying more sail than any single-masted boat before, was simply too dangerous to sail, but the stakes were awesome. By the turn of the century racing for the America’s Cup had become more than a gentleman’s game. In 1903 it was an all-or-nothing contest—fraught with political tension—between two great rivals, Britain and America. Anticipating the acrimonious battles over the America’s Cup today, the story of Reliance explores the ways big yachts and even bigger personalities have defined the contest since its inception. Drawing from Herreshoff’s sketches, photos, original models and plans, as well as Herreshoff’s personal papers and letters, author Christopher Pastore shares this story at the Herreshoff Marine Museum on June 23, 2022.