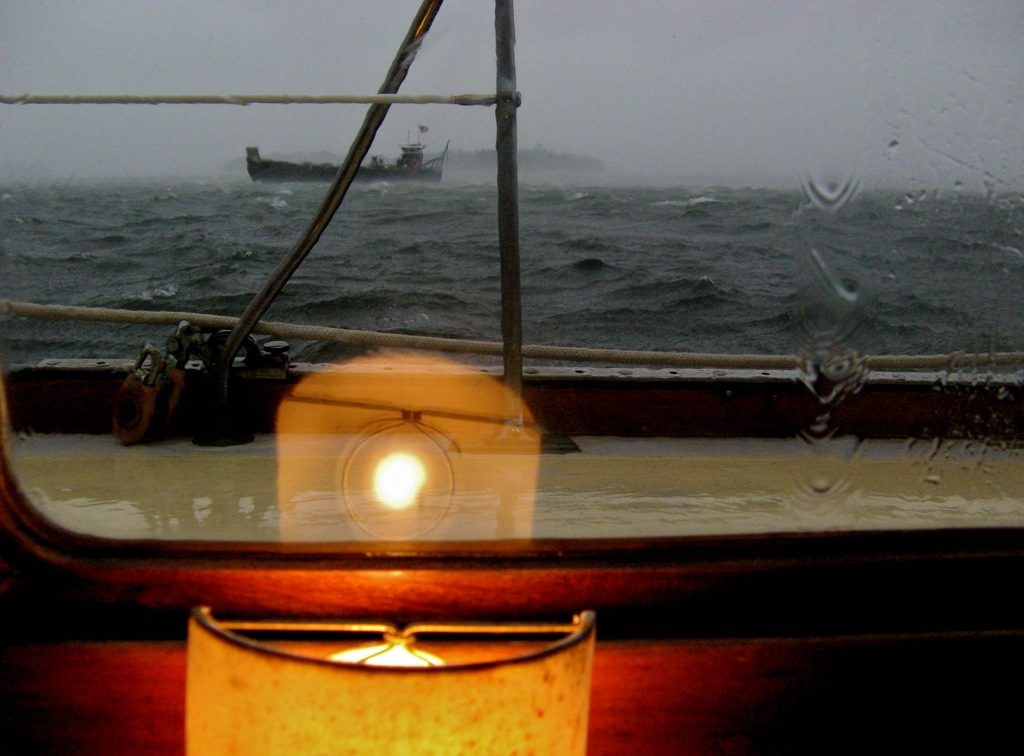 A Northeaster, though not a named storm like a hurricane, can be a big, dangerous storm.

If you’re like most sailors, April finds you making plans for the boating season ahead. You’re probably scouring the charts and deciding which favorite harbors to visit this year, and which new destinations to plug into the GPS. I learned the hard way, though, that in addition to these dreamy plans, not to mention the countless spring commissioning lists that you’ll make in the days and weeks ahead, you should finalize one more list: the Storm Prep List.

Hurricanes threaten to arrive with seasonal regularity on the east coast. Last season, Irene nearly cleared some exposed local harbors, including ours in Rockport, Maine. I sat out Irene in Pulpit Harbor, on the island of North Haven, with several other boats. We were all glad Irene didn’t reach her earlier forecast potential, cresting at “only” about 50 knots of wind. But Irene exposed some holes in my storm prep strategy.

First, popular hurricane holes like Pulpit Harbor are apt to fill with boats in an approaching storm. Sheltered anchoring space was at the limit inside Pulpit. There are many less popular harbors in Penobscot Bay that afford storm protection. I’ll keep other options open in the future.

Second, boatyards become overloaded with an approaching hurricane like Irene, and may not be able to haul all the boats that request to do so, in time.

Third, and most important of all, time is of the essence for storm preparation for your boat; don’t wait until the last minute to decide a plan of action.

While Hurricanes get all the press, recalling a big Northeaster I waited out in Gilkey Harbor on Islesboro, confirms to me that our Northeasters are powerful dangerous storms as well.

It was a big late October Northeaster. In the last light of the day, looking out the companionway hatch moored in Ames Cove in Gilkey Harbor, the great storm stretched from one horizon to the other. The gale roared like a freight train overhead as the winds grew. Islesboro Island just to the east, was welcome protection, for now.

Despite the protection of the near shore, that Northeaster’s fierce winds pulled mooring lines bar-tight as darkness fell. I watched a large workboat out a starboard port. It seemed impossible a mooring could hold it. Soon what sounded like machine gun fire jolted me on deck. The powerful wind had clawed out the upper third of a roller furled jib on a sailboat nearby, and the boat began to sail on its mooring. The racket I heard was the vicious wind shredding the sail to ribbons in minutes. But the mooring held. The boat’s owner may not have known (after buying a new sail), but he was lucky.

And so it went, that long cold night with the Northeaster. The old wood burning fireplace roared like a demon below as the powerful wind created a strong draft in the chimney like a blast furnace. The cowl vents on deck spun to leeward in the fierce wind and joined in with a low moan in the cabin. It was a loud night. My mooring was a good one, which left little to do below in the jostling cabin but wait the storm out.

Before dawn, winds clocked around into the South, and with the help of high tide, my protection from growing waves was minimal. I listened in the dark cabin as big waves rolled onto the bow and the tops flooded over the cabin and sheeted down the ports all around me.

When daylight finally broke, I saw a large sloop driven high onto the beach in Cradle Cove by the previous night’s easterly winds. But Cradle Cove was now the protected shore of Gilkey Harbor, and I wanted to be there! It took several attempts, powering Christmas forward to slacken the mooring pennant, then sprinting to the bow to cast off the loop.

I dodged the Northeaster’s clocking winds for nearly 48 hours. Gilkey was just too open in this big storm to give good protection. That Northeaster was dangerous and beautiful, and it wore me out.

I vividly recall the following morning in Cradle Cove. I bolted upright in my berth startled awake by a familiar woman’s voice calling my name. It was just a dream I realized and laid back and gazed out the open hatch.

The warm sun was just breaking in the east. Then abruptly, I realized the calm around me and that the boat was, finally, still. It was the early morning of All Hallows’ Eve in 2006, and my storm, was gone.

For a few tips on creating a storm plan, click here. 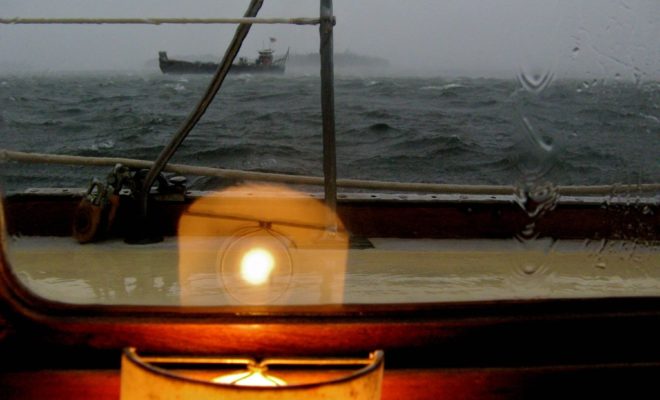 A Northeaster, though not a named storm like a hurricane, can be a big, dangerous storm.