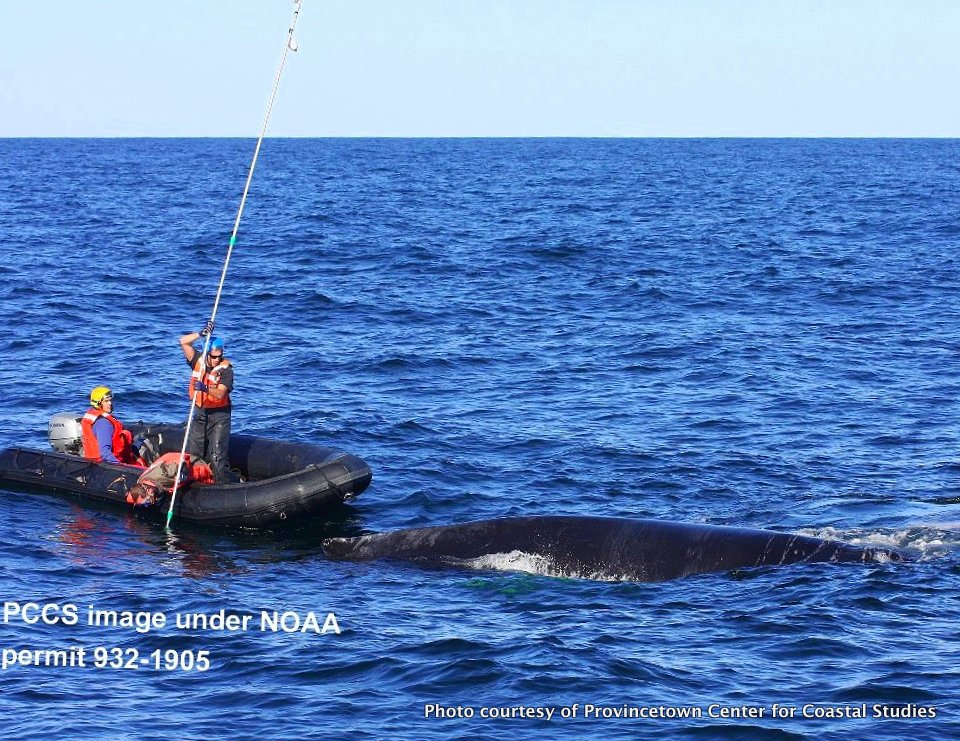 The Marine Animal Entanglement Response team at the Provincetown Center for Coastal Studies works to free a humpback whale.

On Sunday, a commercial fisherman reported a humpback whale caught in gear off Jeffreys Ledge, approximately 25 miles east of the New Hampshire coast. The fisherman, along with the Massachusetts Environmental Police, stood by the whale until the entanglement team arrived. Once on the scene, the disentanglement crew found that the whale was anchored in place with line wrapped around the base of its tail and the left fluke blade. Working from a small inflatable vessel the team used a sharp knife attached to a thirty-foot pole to cut the line, which then unwound from the animal’s flukes. Once freed, the whale swam off quickly.

On Monday, a recreational boater spotted a humpback swimming off Peaked Hill in Provincetown with a buoy in tow. Despite having line caught in its mouth and wrapped around its head, the whale was swimming and diving freely, so the entanglement crew attached a number of buoys to the entanglement using a grappling hook to slow the animal and keep it close to the surface. A fixed knife on the end of a pole was then used to cut the line and the drag created by the buoys pulled the off the gear.

In addition to the whale disentanglements, the team also freed leatherback turtles from four different locations in Cape Cod Bay, off Provincetown, Truro, and Dennis. In all cases these large sea turtles had line wrapped around their necks and flippers. Responders discovered that one turtle, disentangled off Sesuit Harbor in Dennis, was the same individual that had been released in Provincetown only two days earlier. Two of the turtles were tagged to help gather information about these poorly-understood species. This brings the number of leatherback turtles freed by the team this summer to eleven — the busiest on record.

“These disentanglements would not have been successful without the help of the fishermen, recreational boaters, the US Coast Guard, MEP, the Dolphin Fleet, and harbormasters from Provincetown to Dennis,” said Scott Landry, director of the Marine Animal Entanglement Response team. “In all cases these mariners stayed with the animal until we arrived, monitoring the animals’ movements and guiding us quickly to their location. When you consider how endangered humpbacks and leatherbacks are, these efforts can make a huge difference.”

Boaters who spot an entangled whale, sea turtle or other marine animal are urged to report the sighting immediately to the Marine Animal Entanglement Response Hotline (1-800-900-3622) or the US Coast Guard, and to stand by the animal at a safe distance until trained responders arrive.

Provincetown Center for Coastal Studies disentanglement work is supported by a grant from the National Marine Fisheries Service and the Massachusetts Division of Marine Fisheries. Support also comes from grants from the Massachusetts Environmental Trust and contributions from private foundations and Provincetown Center for Coastal Studies members. All disentanglement activities are conducted under a federal permit authorized by NOAA.

Photos of Record Week of Rescues for Provincetown Team 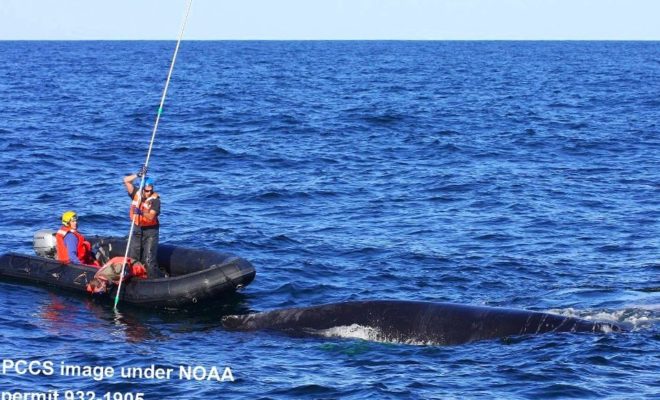 The Marine Animal Entanglement Response team at the Provincetown Center for Coastal Studies works to free a humpback whale.