Front Street Shipyard on the Belfast waterfront is moving forward with plans to upgrade its lifting capabilities with a 485-U.S.-ton (440-metric-ton) hoist. Having secured final approval to build new piers, the owners of Front Street Shipyard are investing in a hoist large enough to service a greater contingent of international superyachts. They are also beginning the local permitting process to expand their facilities with a new building which will be large enough to allow the new lift inside. Front Street Shipyard’s expanded capabilities are expected to grow the international yachting community in Maine.

The new hoist is on order from Cimolai, an advanced metal construction company in Italy. Cimolai’s team will build the hoist’s components in Italy and ship them to Belfast for assembly. Front Street Shipyard’s owners expect the hoist to be fully operational by August 1. The existing 165-ton hoist will remain the workhorse of the yard

“With these new capabilities, we expect to attract even more diverse yachts to Maine,” said JB Turner, president of Front Street Shipyard. “We also expect be able to generate over 40 new jobs in an expanded facility, so we hope the City of Belfast will continue to work with us in growing our business.

Front Street Shipyard has begun the permitting process to expand their facility with a new 24,000-sq ft building. Should this new structure receive approval, it will accommodate some of the larger yachts the yard will attract with the new hoist.

Since the company launched in January 2011, Front Street Shipyard has built an expansive waterfront facility. Their projects have included refits on a 106-foot Burger motoryacht, a 90-foot Doggersbank motoryacht, and an 86-foot Swan sailboat. Currently undergoing refits are a Lyman-Morse 90’ motoryacht, a custom 122’ classic, an Ocean 80, a 92’ Palmer Johnson ketch, and an 80’ Burger motoryacht. They also currently service and store 130 boats. The planned expansion will increase that capacity as well. 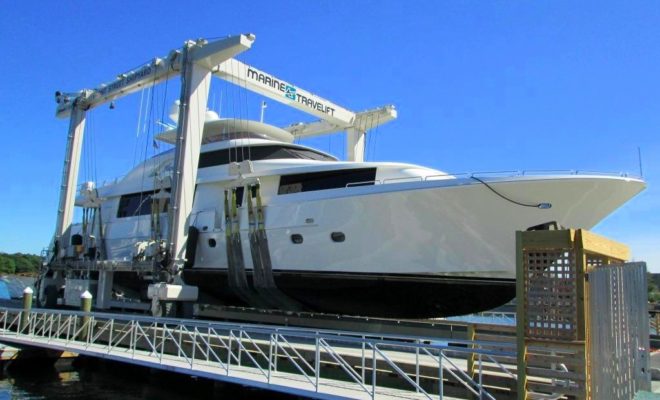