NEWPORT, R.I. (Sept. 24, 2018) – An eight-race series held Friday through Sunday (September 21-23) on Rhode Island Sound and Narragansett Bay determined title holders for the 2018 12 Metre North American Championship. The event, hosted by Ida Lewis Yacht Club and including divisions for historic 12 Metres from the Modern and Traditional eras (1974-1983 and 1958-1970, respectively), was especially competitive this year due to teams ramping up for the 2019 12 Metre World Championship, which also will be hosted by Ida Lewis Yacht Club on these same waters off Newport, R.I. next July.

“The boats that prevailed had to perform in all wind ranges and sailing conditions,” said Event Chairman Peter Gerard, explaining that the fleet of nine boats had three races on Friday that were held in ideal 12-15 knot winds “outside” on the open water where the America’s Cup 12 Metre races were held from 1958-1983. Saturday’s three races saw 15-18 knots at the race course “inside” the Bay (north of Pell Bridge), and Sunday’s last two races were held in challengingly light and variable breezes, also inside. “It was a true test for the championship and a great example of the 12 Metres committed to and prepping for the Worlds here next year.”

Topping five boats in the Traditional Division was American Eagle, which has been chartered by the American Eagle 2019 Syndicate for this year and next. The team is comprised of regional sailors mostly from Rhode Island and Massachusetts, including Bob Morton (Newport) who skippers and leads the syndicate jointly with team member Cindy DeLotto (Newport/Edgartown, Mass.).

“This really showed that both our team and boat are tuned up,” said Morton after racing on Sunday. “I don’t know if we’ll do anything else to the boat; we’ll just continue to improve on what we are doing in preparation for the Worlds.”

Giving American Eagle its best run for the money was Weatherly, chartered by Jay Schachne (Barrington, R.I.) who plans to compete in the Worlds. Weatherly finished with 18 points to American Eagle’s 14; however, only two points separated the two boats going into Sunday. “We were working one-on-one with Weatherly because mathematically we only had to beat them to win,” said Morton, who took second in both races Sunday while Weatherly finished third in both. “It was crazy out there, all the back and forth, close racing all the time. We don’t have any real strengths…for instance, Columbia excels in heavy air, Weatherly is good in light air. We just average out; we’re always there. You can see that in our score line; we were never worse than second.”

According to American Eagle’s tactician Dave Vietor (Edgartown, Mass.), Sunday’s races were “character building.” He knows a thing or two about 12 Metres, as he skippered Courageous in the Defender Trials for the 1983 America’s Cup.(Courageous, a veteran of five America’s Cup campaigns and twice a successful defender, finished third in the Modern Division with a new face, Arthur Santry of Arlington, Va./Newport, R.I., at the helm.)

Going into Sunday, Victory ’83, skippered by owner Dennis Williams (Hobe Sound, Fla./Newport, R.I.), was leading the four-boat Modern Division by one point, but it was Challenge XII with owner Jack LeFort (Jamestown, R.I.) at the helm that ultimately won – by one point. “We were really concerned about Victory ’83, because it’s a very good boat and team, and we knew whoever won today was going to be the champion,” said LeFort, who sailed with America’s Cup and Volvo Ocean Race veteran Ken Read aboard as tactician. “It was fluky, it was hard and we ended up 1-2 and they posted a 2-3. All regatta, it was anybody’s game at any time. The 12 Metre racing is great competition, we love it. It will be nice when there are more boats at the Worlds.”

According to Peter Gerard, who is also heading up the Worlds, as many as 10 Modern 12 Metres are expected at that event, while five Traditional, six Grand Prix (built for the 1987 America’s Cup) and three Vintage 12 Metres (built before the America’s Cup 12 Metre era) are also expected, making it the largest gathering of 12 Metres ever in North America.

At Sunday’s afternoon Awards Ceremony at Ida Lewis Yacht Club, the Ted Hood Trophy was awarded to the teams in each division with the highest points overall for the season. Those teams were American Eagle and Challenge XII.

American Eagle is currently the top Americas Fleet contender in the Waypoint Series leading up to the 2019 Worlds.

At the 12 Metre Yacht Club’s Annual Dinner, held at the Clarke Cooke House on Thursday evening (Sept. 20), the Ted Turner Trophy was awarded (in absentia) to James Patrick Howaldt (Copenhagen, DK), Vice President of the International Twelve Metre Association (ITMA). Gary Jobson made the presentation noting that Howaldt’s love of 12 Metres combined with his determination and dedication are largely responsible for the thriving Baltic fleet of Vintage 12 Metres, now 20 boats strong. ITMA’s Treasurer, Dr. Robin Wallace, read remarks of acceptance and thanks from Howaldt, while ITMA’s President, Dyer Jones, relayed additional words of praise from his Baltic fleet colleagues.

The Ted Turner Trophy is awarded annually to the individual(s) who have made an outstanding contribution to the 12 Metre Class on or off the water. 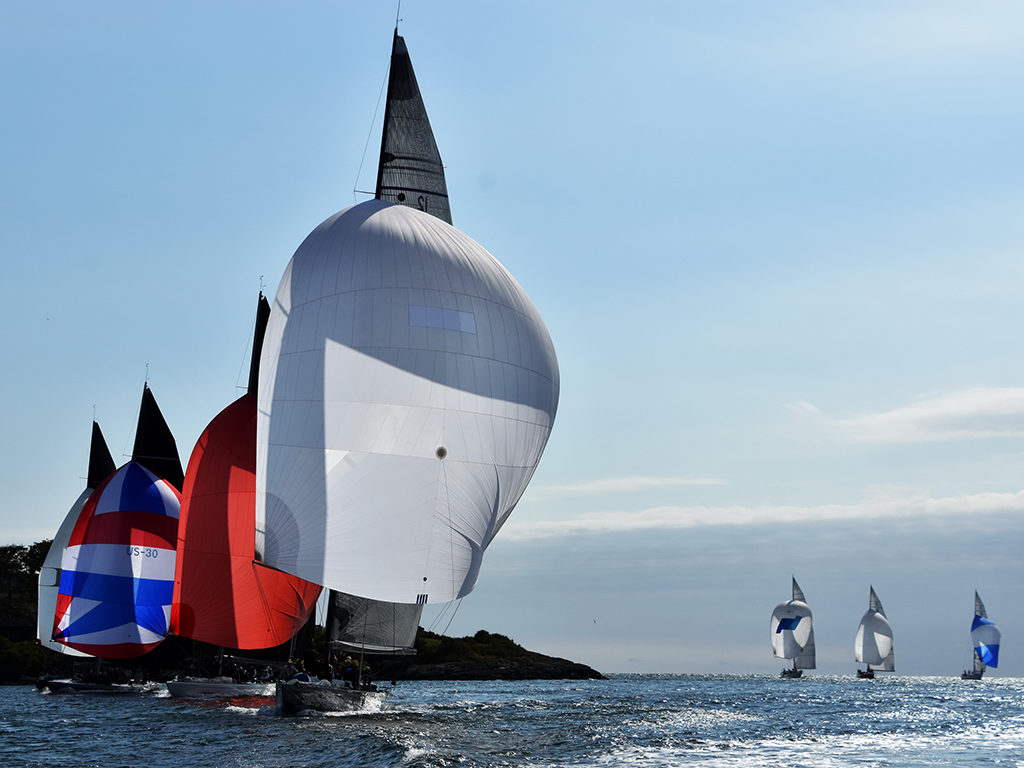 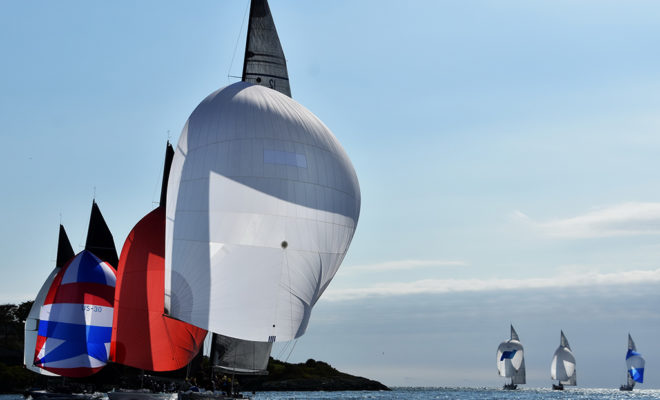