The new captain jumped from the deck, fully dressed, and sprinted through the water. A former lifeguard, he kept his eyes on his victim and headed straight for a couple who were swimming between their anchored sportfish and the beach. “I think he thinks you’re drowning,” the husband said to his wife. They had been splashing each other, and she had screamed, but now they were just standing neck-deep on a sandbar. “We’re fine, what is he doing?” she asked, a little annoyed. “We’re fine!” the husband yelled, waving him off, but his captain kept swimming hard toward him. “Move!” he barked as he sprinted between the stunned owners. Directly behind them, not 10 feet away, their nine-year-old daughter was drowning. Safely above the surface in the arms of the captain, she burst into tears and screamed, “Daddy!”

How did this captain know — from 50 feet away — what the father couldn’t recognize from just 10? Drowning is not the violent, splashing call for help that most people expect. The captain was trained to recognize drowning by experts and years of experience. The father, on the other hand, learned what drowning looks like by watching television.

If you spend time on or near the water (hint: that’s all of us), then you should make sure that you and your crew know what to look for when people enter the water. Until she cried a tearful, “Daddy,” the owner’s daughter hadn’t made a sound. As a former Coast Guard rescue swimmer, I wasn’t surprised at all by this story. Drowning is almost always a deceptively quiet event. The waving, splashing and yelling that dramatic conditioning (television) prepares us to look for is rarely seen in real life.

The Instinctive Drowning Response, so named by Francesco A. Pia, Ph.D., is what people do to avoid actual or perceived suffocation in the water. And it does not look like most people expect it to. When someone is drowning there is very little splashing, and no waving or yelling or calling for help of any kind. To get an idea of just how quiet and undramatic drowning can be, consider this: It is the number two cause of accidental death in children age 15 and under (just behind vehicle accidents). Of the approximately 750 children who will drown next year, about 375 of them will do so within 25 yards of a parent or other adult. In 10 percent of those drownings, the adult will actually watch them do it, having no idea it is happening.

Drowning does not look like drowning. Dr. Pia, in an article he wrote for the Coast Guard’s On Scene magazine, described the instinctive drowning response like this:

This doesn’t mean that a person who is yelling for help and thrashing isn’t in real trouble — they are experiencing aquatic distress. Not always present before the instinctive drowning response, aquatic distress doesn’t last long, but unlike true drowning, these victims can still assist in their own rescue. They can grab lifelines, reach for throw rings, etc.

Look for these other signs of drowning when persons are in the water:

So, if a crewmember falls overboard and everything looks okay, don’t be too sure. Sometimes the most common indication that someone is drowning is that they don’t look as if they’re drowning. They may just look as if they are treading water and looking up at the deck. One way to be sure? Ask them, “Are you alright?” If they can answer at all, they probably are. If they return a blank stare, you may have less than 30 seconds to get to them. And parents — children playing in the water make noise. When they get quiet, you need to get to them and find out why. 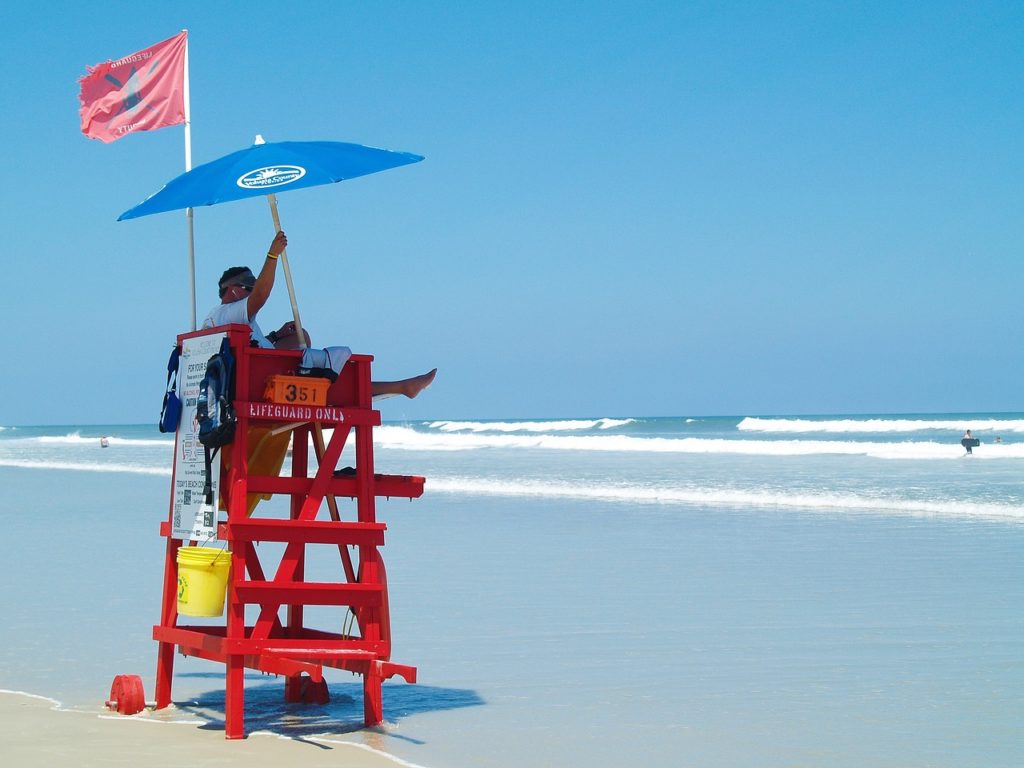