Goose Hummock, established in 1946, has a long tradition of offering the most well-stocked fishing, hunting, marine and water sports gear on Cape Cod. They specialize in fishing gear (saltwater, fly, and freshwater), rod & reel repair, marine services, and outdoor rentals. Goose’s highly experienced staff, all accomplished outdoorsman, can guide you in making the most of your time on the Cape.

​For centuries the shifting, grass topped dunes of Nauset Beach have formed the only barrier between the North Atlantic and the narrow arm of Outer Cape Cod. The only opening in miles of unbroken surf between Provincetown and Chatham is the narrow cut known as Nauset Inlet at Orleans. Here, winter and summer, the ever moving tides ebb and flow between the sea and Orleans Town Cove and Eastham Salt Pond, draining and flooding the vast salt meadows of Nauset Marsh.

Since the days of the early tribes of Cape Cod Indians, the wide expanse of Nauset Marsh has been the winter refuge of great flights of migrating Ducks and Geese. In this same marsh, the Indian hunter of the Nauset Tribe. the early white settler, the market gunner, and today the sportsman hunter have all sought the wary waterfowl. Over the years, the largest most prized of these birds has been the Canada Goose.

A small outcropping of marsh grass, forming a tiny island scarcely twenty yards in diameter backed by a broad salt meadow and surrounded by a tidal channel near the southerly end of Nauset Marsh, has for generations been called Goose Hummock by the hunters of Cape Cod. Goose Hummock has created a favored resting and feeding location for countless flights of geese winging their weary way in over the dunes of Nauset. It was at Goose Hummock that the market hunter crouched shivering behind cakes of ice, waiting for a sight of these great water fowl, outlined before a bright full moon. Goose Hummock has seen teams of young geese, reared in captivity and trained as live decoys, released as flyers to lure the flights of wild geese within range of the hunter’s gun. It was in the creek and water holes around Goose Hummock that Willis Gould, formerly a market hunter, experimented with and perfected his now famous floating cork decoys.

And it was at this same spot, sheltered behind a high dune, that there stood a small gunning stand which bore a weathered sign, “Goose Hummock Camp”. The camp had cost but $105 to build as a good part of the building was fashioned from driftwood found along the outer beach.Winter seas pounded and washed away at the high dune so that the camp had to be moved several times over the years. Finally, in a great winter blizzard several years ago, mountainous seas broke through the dune and destroyed “Goose Hummock Camp”. Later storms have washed sand clear around the little grass island, and Goose Hummock may in time be completely covered.

Willis Gould, his son Bill, and Sarge Sargent, could foresee the day when the relentless tides and surf might finally win the battle against the little island, leaving nothing of it but a memory. So, when these three built the first sporting goods store on the Outer Cape in 1946, they named it Goose Hummock Shop. Goose Hummock Shop soon outgrew it’s original building in East Orleans. The shop moved to the center of Orleans, and in 1950, it’s present home was built on Town Cove near the Eastham town line. In the winter of 1953, Goose Hummock Shop was doubled in size.

So, as the original little grass island in Nauset Marsh is being sanded into memories, the bearer of it’s name, the “Goose Hummock Shop”. continues to grow in size and service. We hope to continue in this manner, since 1946 supplying the outdoors person on Cape Cod with hunting, fishing, sporting, marine /boating supplies and accessories. As always, preserving a reputation for knowledgeable and conscientious service is our aim.

Make sure to visit the Goose Hummock stores if you’re in the area! 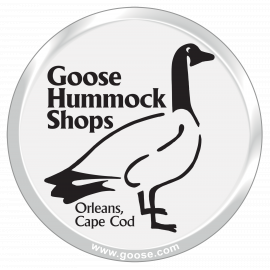