Another tropical storm has formed in the Atlantic and could strengthen into a hurricane by the end of the week.

Jerry, the 10th named storm of this year’s Atlantic hurricane season, was 855 miles east of the Leeward Islands late Wednesday morning. It had maximum sustained winds of 50 mph, the National Hurricane Center said.
The storm is expected to become a hurricane by Thursday night, the hurricane center said. It could get near the northern Leeward Islands, including the British Virgin Islands and Anguilla, Friday into Saturday morning. It’s too soon to tell if the islands will be affected, forecasters said.
Meanwhile, Tropical Depression Imelda is expected to dump up to 25 inches of rain in three days over parts of eastern Texas and Louisiana, the National Weather Service says.
READ MORE at cnn.com 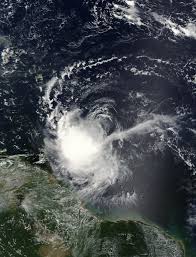 Posted September 18, 2019 by US Harbors & filed under Hurricanes.