For the fourth year in a row, Maine Boats, Homes & Harbors once again has collected a number of awards in two national magazine contests.

“I am so proud of the work done by our writers, photographers, and the rest of the team,” said Maine Boats, Homes & Harbors Editor Polly Saltonstall. “It’s great to see national recognition for the high-caliber work of our magazine contributors.”

The bi-monthly magazine of the Maine coast won four honorable mentions in Folio’s prestigious Ozzie and Eddie Awards, including for full issue in the consumer, enthusiast hobby category. In addition, Maine Boats, Homes & Harbors collected four awards in the International Regional Magazine Association’s annual contest, including a gold medal for Nature and Environment Feature (magazines of less than 35,000 circulation) for a story by Nicholas Record about harmful algae blooms. The magazine’s writers also garnered two bronze IRMA medals; for Nancy Harmon Jenkins’ travel feature on Newfoundland and Ronald Joseph’s essay about the Joy and Heartache of Maine Farm Life in the 1960s.

The other Folio honorable mentions were: Essays and criticism in city and regional magazines: Nicholas Record’s story about right whales; Single article, consumer, enthusiast hobby magazine: Art Paine, A Faster Breed of Cat; Single article, city and regional magazines, northeast: Donnie Mullen, The Grand Lake Canoe an Enduring Design from Maine’s Lake Country.
The annual Folio awards program—spanning all corners of the magazine publishing industry—recognizes the very best in editorial and design. It’s the most comprehensive and prestigious awards program of its kind in the industry. A panel of more than 300 judges narrowed more than 2,000 entries into a pool of roughly 1,100 finalists. In total, 378 awards were given out across 54 categories.

Saltonstall said she was especially proud of the awards won by Record, who is a senior research scientist at the Bigelow Laboratory for Ocean Sciences. His writing for the magazine is part of an effort to include science writing in the magazine’s coverage of the coast.

“Maine is home to a number of nationally known scientific labs that are doing ground-breaking research on the marine environment,” Saltonstall said. “We are thrilled to be able to partner with writers like Nick, Catherine Schmitt (an environmental scientist who has worked for Maine Sea Grant and now is science communication specialist at Acadia National Park’s Schoodic Institute), and others to shine a light on the natural world around us.”

The other prize-winners include Jenkins, who is an award-winning cookbook author and widely published food writer, Joseph, a retired Maine wildlife biologist, Mullen, whose work also has appeared in other national magazines, and Paine, a yacht designer, sailor, and builder who has been writing for Maine Boats, Homes & Harbors since the magazine began 32 years ago. 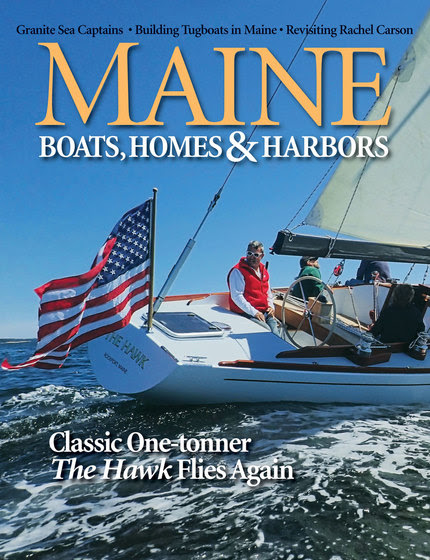