With Temperatures Dropping, Can You Handle the Fish?

While many anglers sing the praises of Florida’s warmer fishing months, seasoned anglers know that winter can offer great fishing opportunities for some of the state’s most sought-after fish species. As the temperatures drop, you’ll spot many anglers, including veteran kayak angler Stephen Stubbs, following spotted seatrout to fresher water, where the fish congregate in large schools.

While this can make spotted seatrout an easy target, this species is also especially vulnerable to fatigue and exposure, so as the winter bite turns on, it’s important to use proper gear and fish handling techniques. This ensures the best chance of survival for released fish. Read on for some tips to help you handle the fishing as the weather cools down and the action heats up.

Prepping for the Day

A successful day of fishing begins with preparation. Be aware of the area you will be fishing and local fish you might catch. Know the regulations for your target species and make sure you have all the proper gear. Determining ahead of time which fish you are going to keep versus which fish you will release is an easy step to take and something that Stubbs practices regularly.

“My friends and I tend to harvest only slot trout under 19 inches to keep the more productive egg-layers (20 inches and over) in the water to continue the sustainability of this wonderful species,” Stubbs said.

Knowing which fish he plans to release helps to get those fish back in the water quickly, increasing survival and benefitting the fish population.

Some great gear to have in your stash is:

Make sure to reel the fish in as quickly as possible. According to Stubbs, the key to landing a nice trout, especially a big one, is to manage the drag tension. Horsing a trout into the boat can usually result in additional tearing of the area they are hooked, especially around the mouth. It can also cause you to lose the fish. Work them in as they tire and keep tension on the line to prevent a hook release. Playing the fish too much can result in an exhausted fish that cannot avoid predators once released.

Stubbs reminds anglers to always use a net for landing medium-to-large trout and dip/wet any measuring board with water before laying the fish on the board. That helps reduce the loss of slime and scales. Once you’ve got your catch to the boat, use these additional tips to ensure that fish are landed quickly and safely for the best outcome for both the angler and the fish.

Using the correct methods to handle your fish once you’ve landed them is important to ensure that released fish are in prime condition when returned to the water.

Removing a hook can be tricky. Use these tips to get the hook out and protect your trout (and other catches).

Taking steps to return fish to the water properly can be a significant factor in their survival. With a little extra effort, you can give your fish a fighting chance at survival to reproduce and fight another day.

The steps you take on the water today can help positively impact the future of your Florida fish populations! Dropping temperatures don’t have to mean a drop in the survival of the fish you release. To learn more about proper catch-and-release techniques, visit MyFWC.com/FishHandling. 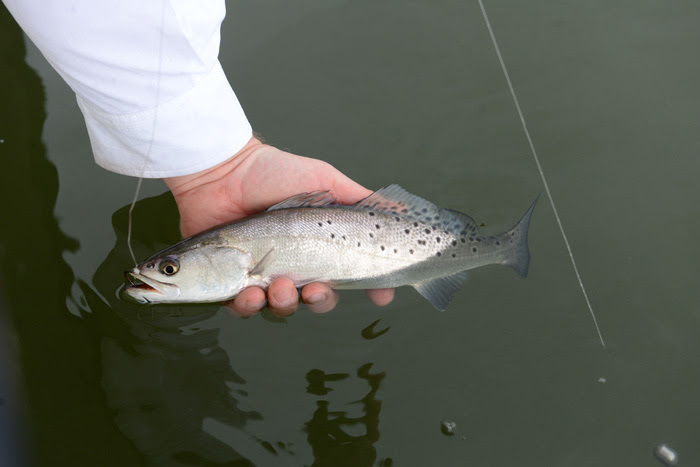