Ocean and river cruise company Viking has revealed it is dropping the word “cruise” from its name as it continues to grow and focus on destinations.

According to CruiseCritic.com, Viking founder Tor Hagen announced during a speech in Los Angeles last week the cruise line’s website has been changed from vikingcruises.com to viking.com, cementing the change moving forward.

Hagen said the decision was made as the company continues to focus on destinations and the offerings that separate the cruise line from other brands, including visiting smaller ports and the “lack of casinos and kids on board.”

As Cruise Critic pointed out, other cruise lines have altered their names and logos to reflect fundamental changes to the product offerings of the company, including Azamara, the Ritz Carlton Yacht Collection and Virgin Voyages.

One of the predominant reasons for the change is Viking’s move into the expedition cruising, with two specially designed ships coming in 2022. The cruise line also expects the delivery of at least 12 ocean and river ships in the coming years. 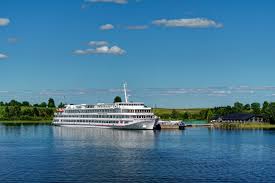 Photo Courtesy of Alexxx-Malev via wikimedia.org.