As global warming pushes up ocean levels around the world, scientists have long warned that many low-lying coastal areas will become permanently submerged.

But a new study published Thursday finds that much of the economic harm from sea-level rise this century is likely to come from an additional threat that will arrive even faster: As oceans rise, powerful coastal storms, crashing waves and extreme high tides will be able to reach farther inland, putting tens of millions more people and trillions of dollars in assets worldwide at risk of periodic flooding.

The study, published in the journal Scientific Reports, calculated that up to 171 million people living today face at least some risk of coastal flooding from extreme high tides or storm surges, created when strong winds from hurricanes or other storms pile up ocean water and push it onshore. While many people are currently protected by sea walls or other defenses, such as those in the Netherlands, not everyone is. 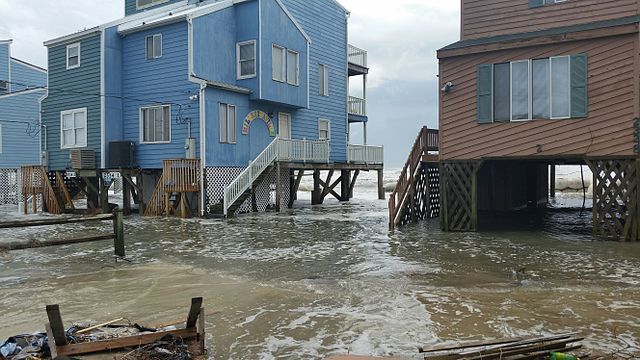 Image Courtesy of North Carolina Department of Transportation / Cyclonebiskit. This file is licensed under the Creative Commons Attribution 2.0 Generic license.