Thirty members of the Coast Guard vessels Abbie Burgess, Thunder Bay, and The Tackle, along with members of the station took on this year’s resurrection, commencing operation at 0900 hours. Dressed in proper tree-constructing uniform (jeans, sweatshirts, knit hats, and face coverings), crew mates mustered into a 30 degree, breezy day for the sake of the 20th annual rising.

As the number of volunteers dwindled in the hours to come, the tree rose taller, meeting its final stateliness at approximately 2:40 p.m. when the final necklace of illumination found its place among the branches.

Several members of the crew are repeat Trap Tree volunteers, according to Coast Guard Lt. Daniel Jones of the Abbie Burgess, having worked in years past along side members of Rockland Main Street, Inc, and re-entry inmates from the Bolduc Correctional Facility. 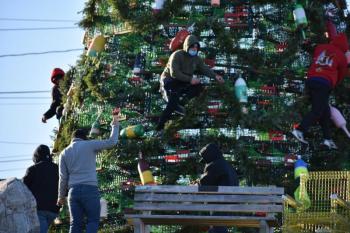