The historic ferry Tourist II partially sank at a pier in Astoria, Oregon on July 28, interrupting her long and storied career. The vessel went down on Friday morning at her berth, according to the U.S. Coast Guard. A containment boom was deployed around the ferry to reduce the risk of pollution, and an oil spill response organization was contracted to provide cleanup services. No one was aboard at the time of the sinking.
The Tourist II has a long history in the Pacific Northwest. She was built in 1924 for a lucrative private ferry route between Astoria and Megler, Washington, near the mouth of the Columbia River. At the outbreak of World War II, she was sold to the Army for use as a minelayer and cargo boat in and around Astoria. As soon as the war concluded, her original owner bought her back from the Army and returned her to work on the ferry route. She operated on the same service until the Astoria-Megler Bridge was completed in 1966, which put an end to ferry operations in the area.
After the closure of the ferry service, Tourist II was transferred to Pierce County, Washington, where she worked on the Puget Sound as the Islander of Pierce County. In 1996, she was purchased by Seattle harbor-cruise company Argosy Cruises and renamed the Kirkland. She underwent an extensive refit and began her new career in the dinner-cruise trade, operating in and around freshwater Lake Washington.However, the vessel suffered a fire in 2010 while moored alongside at her berth in Kirkland, and the engine room was destroyed. Argosy declared the vessel a total loss; a private collector restored her, and she eventually found her way into the hands of a non-profit in Astoria – her home town.READ more at https://www.maritime-executive.com/article/historic-ferry-sinks-at-the-pier-in-astoria-oregon 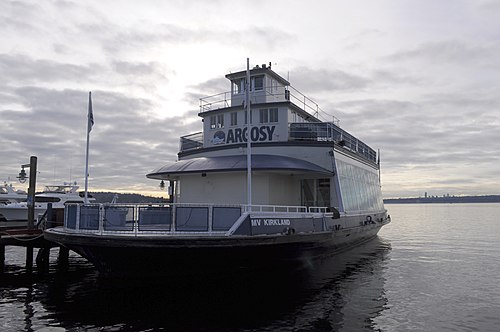