Going for a swim on a cold December day in Rockland Harbor, when the water temperature is an average 40 degrees, isn’t something at the top of most people’s ‘to do’ list, but for one Maine resident that’s exactly what he will do – all to help lighthouses!

“When I mention this swim to people they are quite surprised with the feat at hand,” says Eric Davis, Friends of Rockland Breakwater Lighthouse chairman. “So it’s obvious that this endeavor is not a normal activity, which underscores Gary’s dedication to both his sport and the cause of lighthouse preservation.”

Davis went on to note, “While it is important to consistently raise funds for our lighthouses, we’re also challenged in a good way to create new and fun events that have not been done repeatedly – events that capture people’s imaginations. With Gary’s swim, we feel we are able to share such a unique fundraising activity with the community, which we are very excited about.

”The American Lighthouse Foundation and Friends of Rockland Breakwater Lighthouse have set a goal of raising $15,000 with the December 10th Icy Swim for Lighthouses, but they need the support of the public to make this happen.

“Gary’s passion for lighthouses and seeing them preserved is evident the minute you talk with him,” said Bob Trapani, Jr., American Lighthouse Foundation executive director. “To see someone like him undertake such a physical feat to help our local lights like Rockland Breakwater and Owls Head is truly inspirational.”

Trapani concluded, “As with so many other vital treasures in our communities that benefit from caring individuals who go above and beyond to make a difference, Gary’s upcoming swim is an excellent example of commitment and dedication to a mission that has a positive impact on untold thousands of people who cherish Rockland Breakwater and Owls Head lights.”

Thanks to the efforts of the American Lighthouse Foundation and Friends of Rockland Breakwater Lighthouse, the Owls Head and Rockland Breakwater lights are not only being restored to their former glory, they are also open to the public Memorial Day through Columbus Day each year for a one-of-a-kind cultural experience.

To support Gary’s quest, you can make a donation online by clicking here. 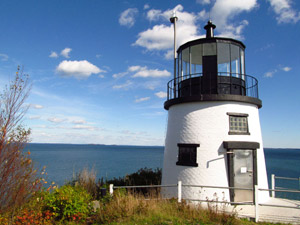 Gary Sredzienski will begin his swim in the shadow of Owls Head Lighthouse. (Photo by Bob Trapani, Jr.)

Photos of Mainer to Undertake Icy Swim to Help Lighthouses

Gary Sredzienski will begin his swim in the shadow of Owls Head Lighthouse. (Photo by Bob Trapani, Jr.)