Every Day, Any Weather: The Isle Au Haut Mail Boat

Getting to Isle Au Haut is a true Maine coast experience. You have to cross the Eggemoggin Reach, drive over two bridges and two causeways, and hop two islands. All this before you even get to the mail boat, a 46-foot Jarvis Newman design that was made for harsh weather and heavy seas.

The mail boat has a powerful hull that, according to head captain Josh Weed, was built to break through four to five inches of ice. “Concrete was actually added to the bottom of the boat for ballast,” Weed explains. He is watching fellow captain Ben Hitchcock guide the boat through the Isle Au Haut thoroughfare. “It’s a bulldozer. We only really cancel the ride three or so times a year. It could make the trip, but I usually call ahead to see if any of the islanders are coming to the mainland, and if they aren’t, we stay in Stonington.”

The ride to Isle Au Haut is short, but it can be lonely. Ben Hitchcock, a first-year captain from Cape Rosier, tells me that sometimes the boat can have nobody on board. “The boat is slow this time of year,” he says. “This past Saturday morning we didn’t have a single person.”

Hitchcock captained the afternoon trip and had to make a slight deviation to his course due to especially low tides in Penobscot Bay. “We can’t come in the normal way when it is like this,” he says, referring to the extremely low tide that has drained the Isle Au Thorofare of much of it’s water. “We have to go out around Kimball Island, where the water is deeper.”

Kimball Island frames the main harbor on Isle Au Haut. It’s a lovely outpost of wild hiking trails and miles of coastline that will forever remain undeveloped, a product of Acadia National Park’s vast holdings on the island. The town dock greets the mail boat twice a day in the winter, but more often in the summer. Weed enjoys every day on the boat. “The people are nice and you get to know them.” He says. “I love being out here in all seasons and all conditions.”

Riding the mail boat, or any other craft of its ilk, such as the Beal and Bunker in Northeast Harbor or the Laura B in Port Clyde, is a true coastal experience. The direct impact that water has on island residents becomes very clear when you overhear people talking about what they need from Stonington or Ellsworth, and if someone can bring back some needed supplies for the furnace and the lobster gear. Captain Weed estimates that forty-five to fifty residents remain on the island throughout the winter months, a paltry number that increases in the summer months.

No matter how few people remain, the Isle Au Haut mail boat will service them, whether or not Mother Nature tries to interfere. Island living is full of obstacles, but the daily access to the mainland is a very valuable commodity. 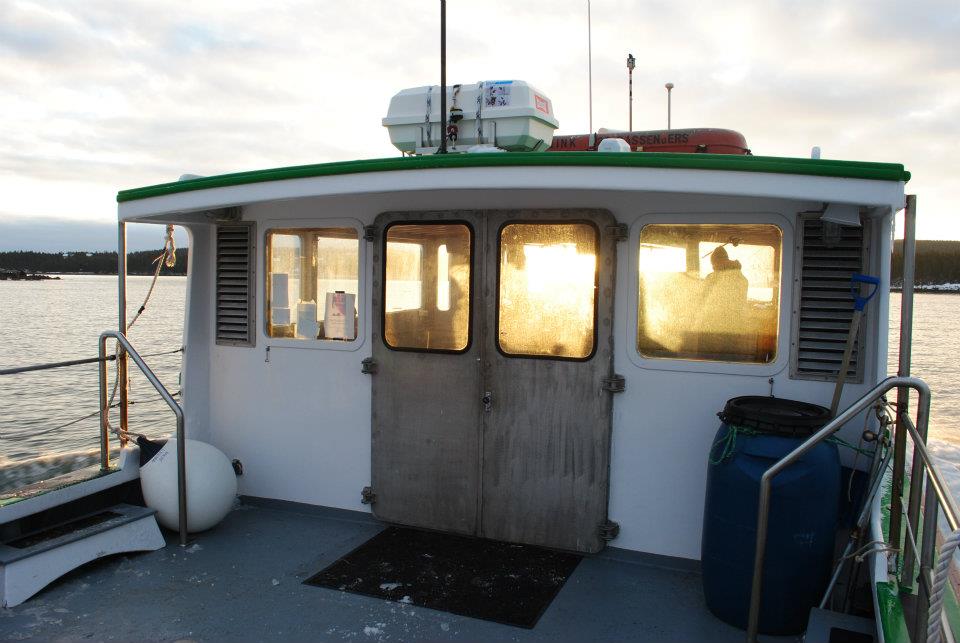 Winter's light on the morning run to Isle Au Haut.

Photos of Every Day, Any Weather: The Isle Au Haut Mail Boat 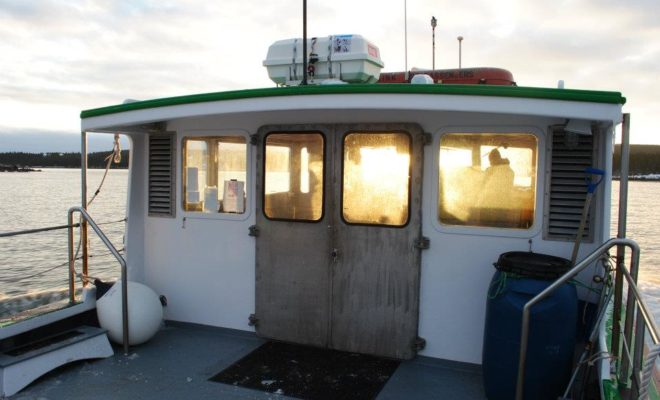 Winter's light on the morning run to Isle Au Haut.