Voices from the Waterfront: Meet Ann and Richard Cook

Ann and Capt. Richard Cook of Charlestown, Rhode Island, sell locally caught, fresh seafood at Rhode Island and Connecticut farmers markets, restaurants, and through their community supported fishery program. Capt. Cook also fishes for summer flounder, striped bass, sea bass, and lobster from the Sandra Lynn, his 35-foot fiberglass boat. Ann, a bank branch manager and vice president, works with Richard at the markets and manages the books for the business. We interviewed the Cooks at their new seafood processing facility in Point Judith, Rhode Island.

How did you get into fishing?
Rich: I remember fishing as a little kid; I was four or five. In high school, I’d fish for striper all night long and race to the market to sell my catch before school. I got serious about commercial fishing in 1982 and it’s built up over the years.

Why did you branch out into selling seafood directly to customers?
Rich: We were working long hours to accomplish the same thing that wasn’t as hard ten or fifteen years ago. So we started The Local Catch to maximize the price for every fish we catch.

What challenges have you faced developing your business?
Rich: When we started a year and a half ago, we quickly realized we weren’t allowed to fillet, process fillets, or sell directly to customers. The health regulations and shipping practices are so heavily regulated. So we decided to get a fully licensed processing facility that meets all the health and safety standards. We now have thirty-three or thirty-four state or federal licenses between the commercial fishing boat, the truck licenses, the Rhode Island Department of Health licenses, and the wholesale dealer’s licenses.

Ann: Being the new guy on the block, it was also difficult to get new fishermen to sell to us because they’re already tied in with other wholesalers. Also, we don’t have the facility or desire to offload entire catches from larger vessels. We work with fishermen willing to work with us to buy small quantities of primo fish.

How has your new business grown in the last year and a half?
Rich: We started by selling in five or six farmers markets last summer. This summer, we’ll be in fifteen or sixteen markets. We try to sell different products and fish that no else has, like yellowtail roe, John Dory, as well as summer flounder, cod, striped bass, black sea bass, bluefish, blackfish, monkfish, lobsters, and scallops, to name a few.

What’s your niche?
Rich: There’s nothing unusual about a fisherman buying a wholesale business and selling fish throughout the world. Our little niche is that we target farmers markets, community supported fishery contracts, and a small core group of local restaurants. All the fish we sell is landed locally, within fifty miles of Point Judithclick here. It’s in really superb condition.

Ann: A lot of people at the markets ask questions about how to cook the fish. We explain how we cook different fish. We also have a box of recipe cards they can take with individual recipes for each fish.

Summer flounder has been declared fully rebuilt. As this fish population has improved, has this affected your business?
Rich: I’m happy to hear it’s fully rebuilt. But we still have some issues with how we can harvest it in Rhode Island. We’re allowed, by state regulations, to catch 100 pounds a day, which is 700 pounds for a week. Why not let us catch a weekly limit of 700 pounds in one or two days each week? This would mean less effort, less fuel, and it would be safer. I’ve raised that issue with other fishermen and state officials.

What is your favorite fish?
Ann: Summer flounder – it’s so light and flaky and easy to cook.

Rich: I also like John Dory. It’s really buttery and the perfect item for the farmers markets because you’re not going to find it in your local fish market.

This interview is part of “Voices from the Waterfront,” an ongoing series of interviews by the NOAA Fisheries Service with men and women whose lives and livelihoods depend on sustainable fisheries. 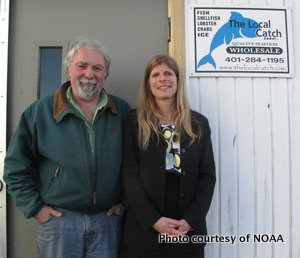 Photos of Voices from the Waterfront: Meet Ann and Richard Cook