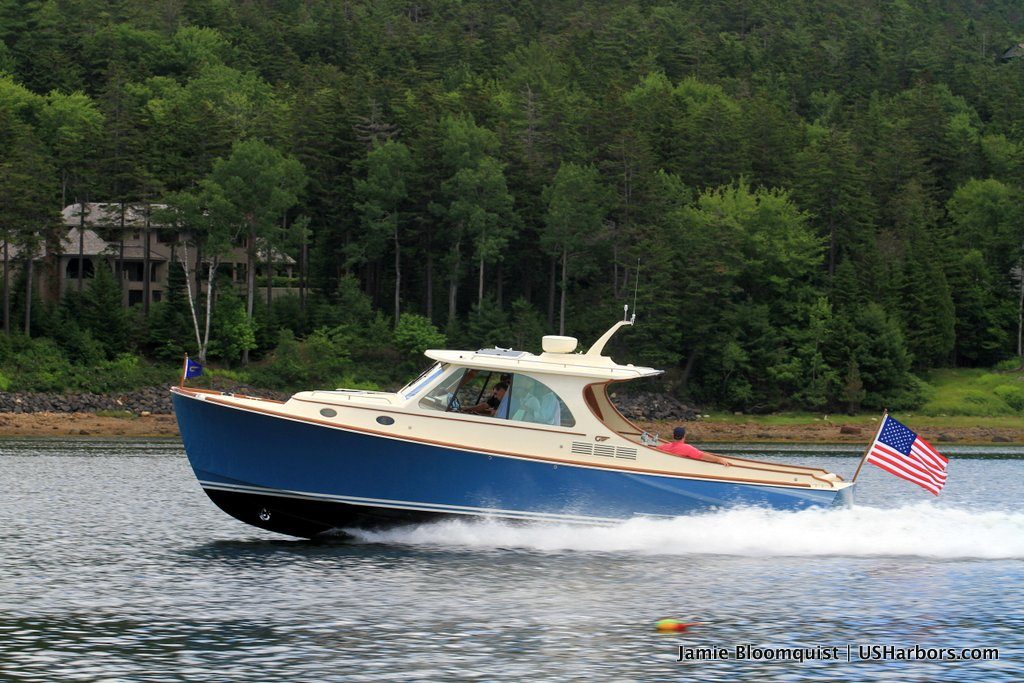 You never, ever, hit a Hinckley.

Audrey Archilles knows that simple truth as well as anyone, so it didn’t come naturally for the fiberglass fabricator at the Hinckley Company to wind up and smash a bottle of champagne over the bow of the newest half-million-dollar yacht to roll out of the boatyard in Southwest Harbor, Maine. It took two swings, but on July 2 Archilles successfully christened Hinckley’s first T34 motor yacht, launching yet another breathtaking chapter in the life of this storied boatbuilder.

“Fast, fun, elegant, and easy,” Hinckley Company CEO Jim McManus declared in an interview moments after the yacht hit the water. “This model is perfect, and it’s a perfect time for it. People have been looking for a boat that is a little bit simpler than the Picnic Boat, that isn’t quite so long on amenities, that is an easier boat to own. This is it.”

McManus said the T34, which nestles nicely into the Hinckley family between the 37’ Picnic Boat and the T29, was the result of intense polling. Many prospective boat owners wanted a yacht that would be as well-suited to towing kids on a tube as it is to an evening harbor cruise or just a quick jaunt on the bay — at thirty-two knots. “The one thing the boaters we talked to aren’t prepared to give up is speed,” he said. “It’s part of the fun, part of the sport.”

To achieve that need for speed, Hinckley equipped the T34 with two Yanmar 6BY2-260 engines powering twin Hamilton 242 Jet Drives. These help the boat reach its top speed of 32 knots while employing the patented Jetstick, a Hinckley hallmark that literally allows the operator to maneuver the T34 with two fingers.

Hull No. 1 of the new T34 was launched just the way every other Hinckley has been over the past eighty-four years — with a party. More than 250 people, from Hinckley employees to friends, family, and even a few prospective T34 owners, enjoyed a picnic lunch practically under the shadow of a Hinckley Sou’wester 42, one of the sailing yachts that earned the company its legendary status during the 1960s. After the shrimp and Diet Coke were gone and the commemorative hats and T-shirts had been passed out to all employees, McManus joined a few guests on the T34 for a thrilling run up Somes Sound.

“I’ve driven a lot of boats, and this one has a way of being exhilarating and confident,” said Mike Arieta, vice president of production at the Southwest Harbor boatyard, as he launched the brand-new boat through its paces beneath the tall granite cliffs of Mount Desert Island. Indeed, the T34’s motion is so soft that you can hit a set of waves at full speed and not feel like a trip to the chiropractor is suddenly in order. In the small cabin tucked up forward, one could easily prepare a snack without the skipper ever needing to slow down, and the repetitive, almost train-like ratta-clatta-ratta-clatta sound of the boat skipping over the wavetops might actually help younger crewmembers slip into their afternoon nap.

On deck, the single-level deck flows easily from the steering station to the swim platform. Plush seating areas could easily accommodate ten adults, with some seats facing forward and others looking aft, essential when towing anyone. And, even at top speed, the aerodynamics of the coach roof allows passengers to have a conversation instead of being subjected to the dreaded wind-tunnel effect. As with all Hinckley’s yachts, the ride is perhaps best summed up in one word: civilized.

McManus says that the fact that six T34s have already been sold is a good sign that the company will hit its goal of twenty yachts per year, but adds that the best indication of the new yacht’s long-term success is the urge that an owner feels as soon as he or she gets underway. “You get in this boat and you put the throttle down and you instantly look for someone to high five,” he says. 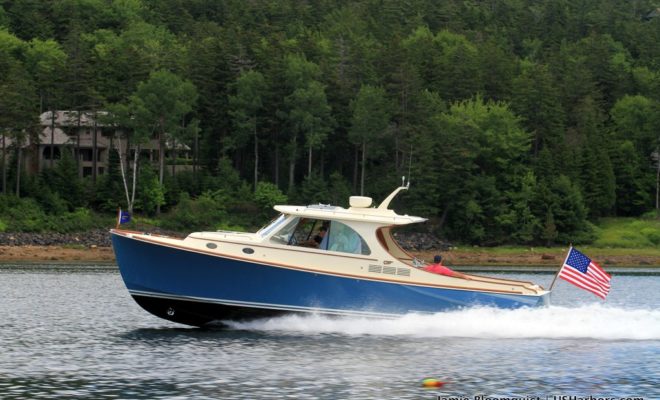