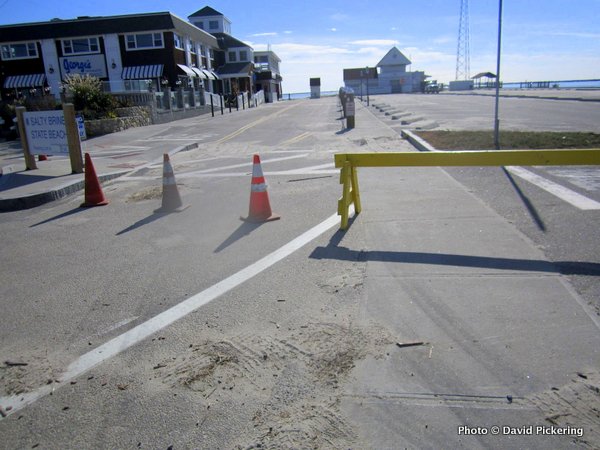 The Galilee parking lot was closed Nov. 6, and yet was perfectly clear.

As of right now, don’t waste your time and gas heading to RI’s south shore to fish. You’ll be very frustrated with closed roads, access, and parking problems, all of which have not been straightened out since the hurricane. It’s been a very slow response to get the beachfront parking areas open.

Much of it is due, I believe, to incompetence and ineptitude on the state’s part. For instance, some of the parking lots are still closed though they are completely clear. This was the case with Galilee, where I fished on Nov. 6. I had to park along the main road since the parking lot was closed off. I don’t know why, since it was all cleared of sand. I did manage to catch three schoolies off the Short Wall on bucktail jigs, my highlight of the day. Near the beach a few guys were shoveling sand off the stairs. So, why the need to close the entire state parking lot?

On Tuesday, though, my first stop was along Gansett, where I wanted to fish the Seawall. Nothing doing. The damaged sidewalk along the wall was closed and off limits. Next stop was the East Wall at Point Judith. The parking lot was a mess with big rocks, holes, and sand all over the place. I did manage to park on the main road going in and was able to get onto the wall which was a mess in places. No luck there.

At East Matunuck State Beach, crews were also working. The road in was clear and half the parking lot was clear, so why was it all closed off? Duh, open up the area that is clean and then clear the rest! I fished the West Wall and the Galilee Channel and caught nothing.

As for Charlestown, I called the police there. They said Charlestown Beach Road was open but they warned, “you will probably get a flat due to all the debris in the road.” Well, get someone out there and clear the damn road! They didn’t know if the breachway state parking area was clear. And, at Matunuck, the state lot at Deep Hole was basically impassible due to sand unless you have a 4×4 vehicle. (I fished the whole Matunuck shore and caught nothing.) This is a small lot that could be easily cleared in an hour with a bulldozer or plowing truck. Yet, it is not getting done. I tried to get into South Kingstown Beach but that parking lot was closed also.

My last stop was back to Narragansett Beach. I was able to park in a private lot and walk down the beach to Narrow River. I caught nothing.

So, I fished the whole day and got three schoolies, but, hey, that was three more fish than I saw anyone else catch. I saw no bait around and very few other people fishing. I did spot a few gannets diving way out so that’s a good sign I guess. The water all over was clean and fishable, but there was very little around.

So, if you can’t park and can’t find a way to get into these areas along the south shore, you certainly can’t fish. It’s game over unless things improve mighty quickly. 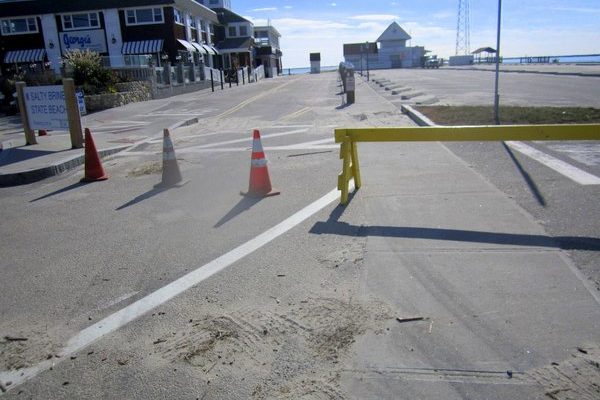 The Galilee parking lot was closed Nov. 6, and yet was perfectly clear.