The Science of Ghost Ships

The oceans are a vast wilderness, full of more unknowns than knowns, where the veil between life and death is at its thinnest. There is no shortage of mystery, no lack of terror. It is no surprise that there are tales of the weird, the unexplained and the down-right terrifying from humanity’s long history with the sea. Here are a couple of tales that will chill you to the bone – until you hear the more plausible explanation that is!

In February, 1948, the City of Baltimore and the Silver Star – American ships passing through the Strait of Malacca along the southern coast of Malaysia – both responded to a nearby distress call. The message, in Morse, read as follows:

“S.O.S. from Ourang Medan. We float. All officers including the captain, dead in chartroom and on the bridge. Probably whole of crew dead” There was a brief moment of garbled code, and finally the last words came through: “I die.” No more communication followed.

Upon reaching the ship, the rescuers encountered a gruesome scene. The corpses of the crew littered the deck, collapsed on their backs and their faces contorted into twisted, wide-eyed expressions of fear. Even the pet dog appeared to have died of fright. Before the ship could be towed to port, a fire started in the hold and rapidly spread through the ship, causing the rescuers to flee and watch from a distance as the ship was engulfed in flames.

The explanation: While this story is tenuous at best, with little record of the ship itself ever having existed, there is fact that the 2nd World War had not long ended which meant that a number of nefarious chemical compounds were finding their way on to the black market. Nitro glycerin reacted with the salt water in the hold to produce a mixture of toxic gases, resulting in the horrible deaths of all aboard and the explosion that destroyed the vessel.

In 1931, the 20-year-old Baychimo became trapped in the icepack. The ice surrounded her and begun to crush and squeeze the ship. The crew held out for 2 weeks before an airplane was able to rescue them. The captain and a few hardy crew members stayed with the ship, waiting for salvage crews to arrive. They had moved out of the boat and were camping on the ice. The weather worsened to the point where they were existing in a near constant blizzard, which didn’t let up for almost 2 months. Eventually, when the snow cleared, the boat was gone, lost – it was thought – to the bottom of the Arctic Sea.

Then in 1962, a group of Inuit in kayaks spotted a ship with Baychimo on the side. They couldn’t get close enough to discern anything else but reported the incident upon return to the nearest port of Barrow, Alaska. The ship on record that matched that name was abandoned by its crew after it had been badly damaged in the ice and was looking like it was going to sink in 1931. How could a ship have reappeared, seemingly unharmed, after 30 years adrift in the most treacherous seas on the planet? Reports of glimpses of the boat continued until 1969. After that, there was no trace, despite the Alaskan government launching a search party in 2006.

The answer is most likely that it became embedded in an iceberg, and, covered with snow, could have stayed afloat and hidden for several years, possibly decades, before the ice released it again. Eventually, although no wreck has yet been discovered, the Baychimo would have found its way to the sea floor.

Arguably the most famous of the ghost ships, this legend has spawned books, movies and even operas. One aspect of the tale, and of other ghost ship tales throughout history, is that the ship is seen to be flying – hovering above the water like a wraith. It can even, so the stories go, travel over land in this manner. It may appear on the horizon inverted, ragged sails on masts that point down into the sea. An omen, a portent of misfortune, recognized by sailors the world over.

Or is it just an optical illusion? Specifically, a type of mirage known as Fata Morgana, which occurs within a thermal inversion out on the open sea. When warm air sits above a layer of cold air – normally the other way around – light waves can be carried in an atmospheric duct, and curve downwards greater the curvature of the earth. Our brains tell us the light is still a straight line. This causes the mirage whereby the image of the ship is seen above horizon, floating and distorted. The real ship may be just below the horizon or even on the other side of some low-lying land – thus producing a ghostly, seemingly impossible sight. The same phenomenon can explain phantom islands, or fairy castles in the sky. In fact, the name is Italian for Morgan le Fay, the powerful sorceress of Arthurian legend, associated with fairies, sirens, and mythical islands. 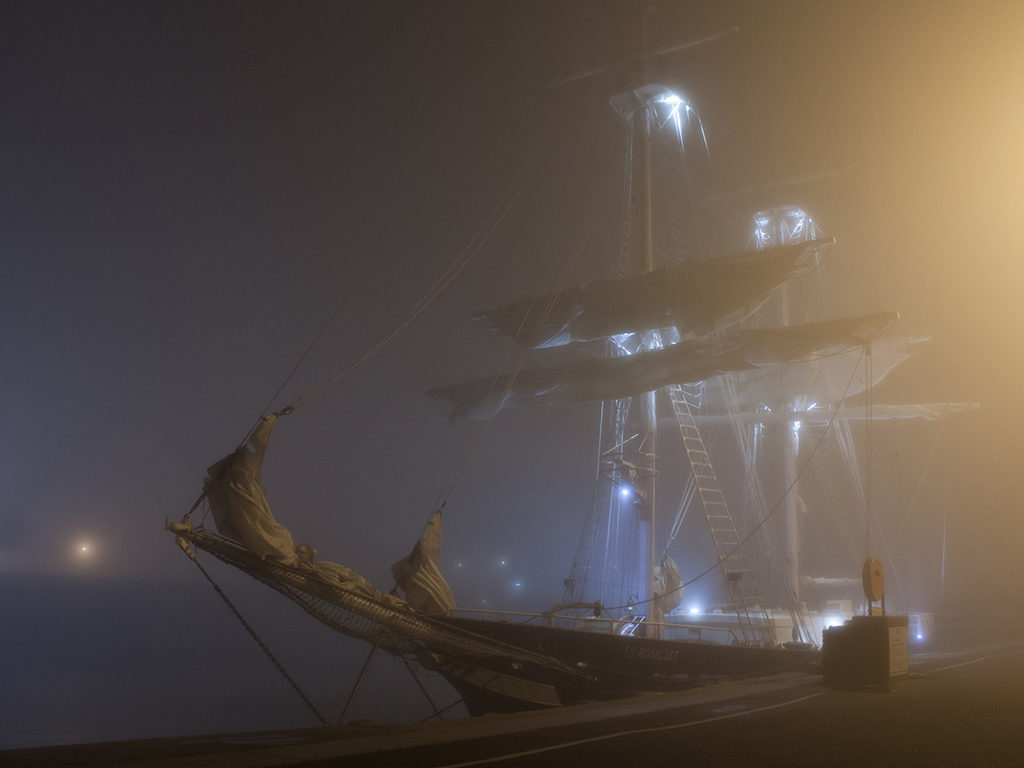 Photos of The Science of Ghost Ships 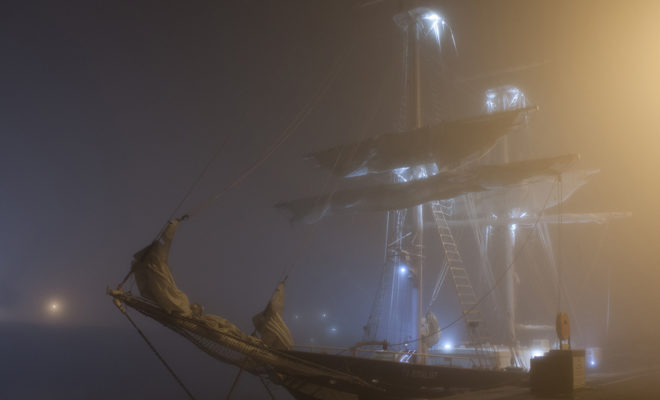