Want some Rolling Stones while enjoying the rolling waves? Water isn’t friendly to most speakers, and it can be a tough battle for us boaters to bring sound to our decks. However, Soundcast’s versatile VG5 bluetooth loudspeaker is strong enough to bump-start a boat party, while small enough to leave room for people too.

The VG5 slots into Soundcast’s VG-range between the smaller VG1 and the more-serious VG10. With this lineup, Soundcast provides an array of systems designed to perform well in rugged conditions and on the coffee table.

The VG5 certainly was made to party. Engineered for poolside and beach use, as well as other on-the-water applications, the loudspeaker was designed to resist weather intrusion and provide reliable, quality sound in every situation. With a rubberized slip-resistant base and a boxy shape, the VG5 itself promises not to go swimming.

Everything about the VG5 is powerful, from the six-inch subwoofer to the geometric design language. Indoors, the VG5’s bass steals the show, but outdoors, the balance works. Soundcast describes the sub as “projecting robust, permeating sound,” which frankly is the best way to summarize the VG5’s performance. The price itself is wallet-permeating, ringing up to nearly $400. In fact, I was tempted to test the water-resistance of the VG5 with a garden hose, but upon seeing the price tag, I quickly decided to focus on learning other features instead. However, with tiny bluetooth speakers on the market for well over $150, the 17-inch tall VG5’s sticker shouldn’t be shocking, as it offers capability not found in other products.

Speaking of capability, the VG5 boasts a large array of features. In addition to the powerful subwoofer, the VG5 includes two 3-inch drivers positioned to produce 360° sound‒perfect for a boat party. While the bluetooth connectivity is easy to use, a direct auxiliary connection is included too, along with an auxiliary cable. The interface is a backlit touch keypad with buttons to activate bluetooth, and pause, mute, and change the volume of music. A fuel-gauge inspired ring of LED lights illuminates to indicate battery power and volume. To those like myself who always skip instruction manuals‒don’t: the VG5’s system is a bit complex without a little guidance.

Also included are an extra, smaller-capacity battery, and an assortment of plug adapters for outlets around the world. Soundcast claims the VG5 can perform for 10 hours on a single charge, but, if more time is needed, the second battery can be brought along as backup. A screwdriver is needed for removing the battery, so be sure to have one on hand. Far down the VG5’s list of features is a USB power output. Poolside, a dead phone battery isn’t an issue, but after a long day at the beach, the USB port could be very useful.

There are many options for those searching for a high-quality sound. However, the versatility of Soundcast’s products is rare, and for those who love the water as much as we do, the VG5 is a stout performer that promises to keep on bumpin’ when the weather turns gray and the fog rolls in.

What is great from Soundcast’s VG5:

What could be improved from Soundcast’s VG5:

–  The price is a bit too cool for t-shirts 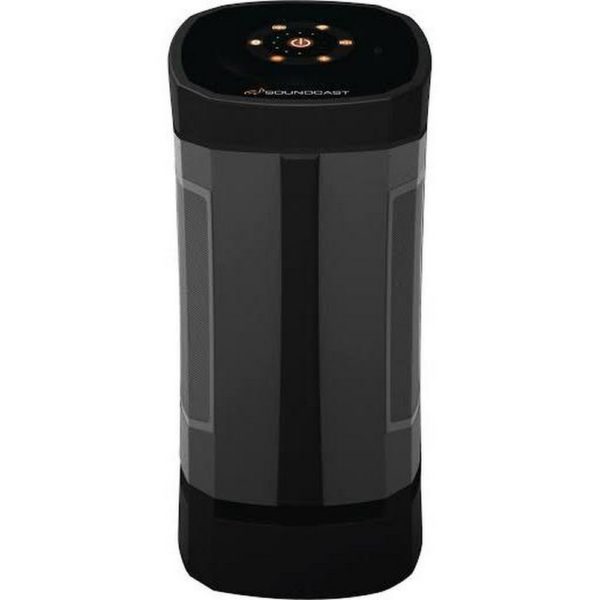