Reminiscing About Reels and Fishing with Dad

One of the nice things about hunting and fishing experiences is how they remain alive in one’s mind for years.

I struggle to recall the three items my wife sends me to the store for but I can clearly recall what color of plastic worm I was using, where I was in the boat, how hard the wind was blowing, and the look on my dad’s and my son’s faces when one summer day 20 years ago I pulled in seven nice bass in eight casts on Turtle Creek Lake.

I had luckily found a five-foot deep stump on a point that held a mother lode of fish. All one needed to do was to hit the stump with a plastic worm, triggering a reaction strike. The other two were casting elsewhere and got nothing. Turtle Creek is a power plant lake near Sullivan, Indiana. Excellent for bass in the 1990’s, it was dead for a while due to water quality problems, but reportedly it has come back. I plan to get there to check it out this spring.

Another clear memory of fishing with my father was one late May morning on Kentucky Lake. Just before daylight, the shad would begin their spawning activity in the numerous weed beds on the islands which dotted this part of the lake near Big Sandy, Tennessee. Naturally bass would be the benefactors, and Dad and I would be there to catch some. This feeding period only lasted about an hour or two at most, so a fisherman needed to make hay before the sun came out to nix things.

Dad always used a reliable Plueger casting reel, but as I was only ten or so, I used an Abu Garcia spincast. I never got into open face spinning reels. I believe I started with a Zebco 202 or 33, like most everyone else, then graduated to an Abu, which usually worked well.

That early morning Dad had just caught a nice keeper bass. Fish were swirling around us. We could hear the pops and smacks of feeding largemouth in the low light. Suddenly, the line on my reel stopped coming out. I fiddled with it a little, but to no avail. Dad was watching me out of the corner of his eye as he landed another nice bass.

My father never, almost never, cursed. Once on a hot day he dinged his hand changing a tire at our filling station in St. Croix, and I think he might have uttered a minor obscenity.

Stopping to help me fix my reel when we were fishing usually wasn’t a big issue in waters near home, but this morning was different. Feeding period time was slipping away. 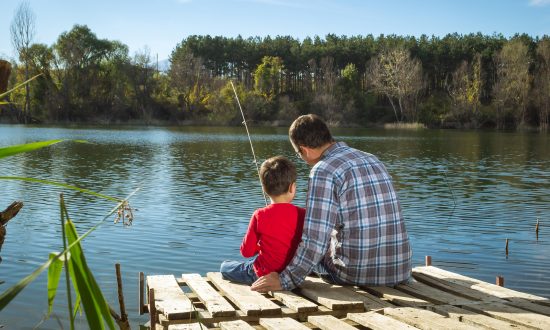