This is the time of year when most of our boats, at least for us northerners, are buried under shrink-wrap if they’re lucky and a layer of snow and ice if they’re not. But in proof that bigger is not always better, the little guys – meaning the ones with smallest boats, of course – get the last laugh in the depths of winter, when they can launch their boats at the slightest sign of a January or February thaw. On New Year’s Day, for instance, twenty-six members of the Down East chapter of the Traditional Small Craft Association (TSCA) launched fourteen boats in Camden harbor and enjoyed a splendid tour around the harbor and even a brief landing on Curtis Island, surely one of the most delightful and easily accessible spots anywhere on the Maine coast. All the boats were traditional designs propelled by either oars or paddles (sails are also allowed, of course), in keeping with the association’s mission to “preserve and continue the living traditions, skills, lore, and legends surrounding working and pleasure watercraft whose origins predate the marine gasoline engine.” Hardly ones to preserve such designs as relics of the past, TSCA embraces contemporary variants and adaptations of traditional designs.

Similar reports of small-craft voyages are turning up in snowy harbors from New Jersey to Maine. What’s your favorite small craft, and how and where do you make use of it in the wintertime? Send us a note (and pictures!) at [email protected] . We’d love to hear your stories and share them on US Harbors.

Photos of In Wintertime, Small Boats Rule the Seas 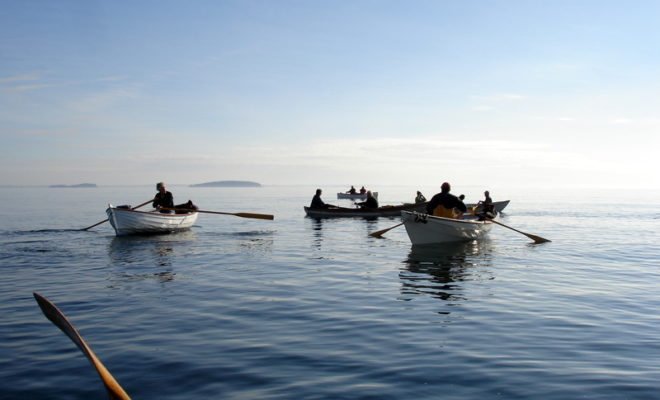