At 4 a.m. Wednesday we nosed in behind the entrance to Boot Key Harbor in the Florida Keys and dropped the anchor. 20-hours of straight sailing and 150 nautical miles lay in our wake. It had been one heck of sleigh ride through daylight and darkness. I hadn’t slept for 28 hours and it felt great to crash on my bunk and get some sleep.

Our mad dash from Fort Myers back to our original departure point in Marathon (Florida Keys and our new pseudo base) was preceded by five-days of fantastic adventure cruising. The crew was comprised of my friend Austin Matheson, a talented sailor and fifth generation Floridian, and Ida Little and Michael Walsh, an amazing couple who literally wrote the book on beach cruising and coastal camping. Ida and Michael have spent decades exploring in small boats; they have lived on deserted islands for months at a time, been disarmed by friendly bandits in far flung locals, and even been shipwrecked on a remote reef at night. The four of us got along really well, and I especially enjoyed the humor and competence of my fellow travelers.

Day 1
The expedition started out of Marathon. We spent an evening packing our gear, food and water aboard, and then the following day crossed under the 7-mile Bridge and headed for Cape Sable and Everglades National Park. The first couple of hours were spent under power but eventually a light breeze filled from behind. After setting the mizzen staysail we picked up a little steam and headed across Florida Bay. The waters of the Bay are incredibly shallow. At the midpoint of our 25-nautical-mile crossing the depth was still only 10-15 feet. The plan had been to sail to Flamingo, but the light winds checked our speed so once we neared the beach of East Cape on Cape Sable we turned to port and skimmed just offshore. Cape Sable is REALLY cool and a definite regular stop for our future trips.

The beaches go on forever and behind them lie endless miles of mangroves, lakes and channels. Everglades National Park is a true gem and thank God it exists. Florida is heavily developed and I read that only 25% of the Everglades still exist. While that level of destruction is depressing, it is wonderful that you can still explore huge areas of wild lands and waters.
As we neared Middle Cape some boats came into view. They were pulled up on the beach and as we got closer I recognized their masts. They were identical carbon sticks to Thorfinn and I realized they were Outward Bound boats. Having worked for the Outward Bound on and off since 1999, I was psyched. Time for a visit!
We neared the beach, swung up into the wind and dropped the anchor. The wind allowed us to tail back to the beach and I hucked our stern line to some of my favorite people on the planet. My part-time Thorfinn Expeditions instructor Wendy Jordan pulled us in, and soon we were exchanging hugs and laughing about our unplanned meeting. The OB folks had semester students on solo so we were able to spend the evening with the instructors. We made a fire and they cooked us up a very tasty meal. The stars came out and we shared a magical evening swapping tales and chatting about future adventures. Somewhere out in the mangroves the alligators and crocs prowled.

Day 2
The sun continued to shine, and the light winds beckoned. After departing Cape Sable we once again set the staysail and continued downwind. After a few hours we arrived at the entrance to the Little Shark River. We spent the next few hours sailing up the confined waters watching the mangroves and wildlife. The confined river opened up into Oyster Bay. Several fishing boats zoomed by. One stopped and showed off a big Black Grouper that they had caught. We eventually headed back out into the Gulf and continued on to the Ten Thousand Islands. They sun set below the horizon while we ate dinner. For several hours we continued on under power before eventually anchoring off Pavilion Key around 10:30 p.m.

Day 3
Several months back I had noticed that Everglades City would be hosting its annual Seafood Festival for three days and it just happened to coincide with our trip. We sailed up the channel to town and tied up at the Rod and Gun Club. Everglades City has a colorful past, and it is a really unique place to visit. The Rod and Gun Club has been around for a long time and it is definitely a sweet spot. We could hear the music coming from the festival so we wandered over and joined the masses. The rest of the afternoon was spent enjoying the country/rock bands and devouring tasty seafood. The beer flowed and time slowed.

Day 4
The Ten Thousand Islands are actually comprised of hundreds of keys and many have beautiful sandy beaches. Just after leaving Everglades City we pulled up on one and fixed our rudder downhaul line that had chaffed to the core. We then sailed to Panther Key and once again pulled up on the beach. We spent the afternoon exploring and swimming before pulling out further for the night. The light winds dropped off and the stars came out. We had another tasty meal and then sat in the cockpit telling tales and philosophizing about adventure and life in general. Ida and Michael shared some of their amazing adventures. Austin and I are a few years behind them in age and their vast experience lent perspective to our own lives as we raise our kids and seek paths that work for all involved. That night I really missed Sarah and my boys. Back in Maine under a couple feet of snow, they went about their lives. I wished they could be here with us playing on the beach and sharing this new adventure.

Day 5
It was time to make some miles up to Fort Myers. I could have stayed in the Ten Thousand Islands for a week, if not more, and I plan to design more expeditions that include them. We departed Panther Key early and then sailed up and around Cape Romano. More than 3 miles offshore we had to pick our way through very shallow water, our rudder hit sand more than once.

Eventually we made it into deeper water and continued on. Huge buildings littered the shore as far as the eye could see as we sailed past Marco Island, Naples, and towards Fort Myers. They stood out in sharp contrast to the more remote regions of the Everglades and the Ten Thousand Islands. I was already missing what was behind us and felt a little deflated. The sailing was great, however, once again we were running downwind with staysail set. The breeze freshened and we made it to Fort Myers Beach that evening. We met up with Austin’s wife, Kassia, and young son Kane. We all went out to dinner before saying goodbye to our valued crew-member. Austin had been a great addition to our little team and it was tough to lose him. We will certainly share more adventures together in the future.

Day 6
As luck would have it, a front moved through the night before and we now had a strong northwest tail wind to throw us back to Marathon. I like challenge and the idea of a straight shot home was appealing, especially with the opportunity for some fast sailing. After exiting the channel from Fort Myers beach we cracked off the sails and took off. The wind and seas built during the day and we starting hitting speeds from 8-11 knots. Needing a new adventure, we headed inside of Marco Island and up to Coon Key Pass where it enters the Ten Thousand Islands. Running the Big Marco inlet was fast and exciting. Michael steered us through. On either side the swells were breaking in the shallows and I got some great sailing footage.
Once offshore from the Ten Thousand Islands we continued on. The sun eventually set and we shared a tasty stew that Ida had whipped up. We named it Nuclear Stew (3 cans of stuff, some powdered milk, cheese, spices and extra love). With the sails wing and wing on either side, we kept our sprint going. Around 11 p.m. we passed Cape Sable and headed for the 7-mile bridge. Michael and Ida went to sleep up in the V-Berth while I kept us on course. Fully bundled up in my foul weather gear and pounding coffee from my thermos, I delighted in our night sail. With one hand on my GPS and another on the tiller I experienced many hours of fantastic sailing. Thorfinn had once again excelled on this expedition. It housed the four of us, allowed for beach landings, and most importantly sailed like a rocket.

The lights from navigational aids came into view. We skirted several shores and headed for the bulls eye red lights on the 7-Mile Bridge. I trimmed in the sheets and headed the last 1.5 miles to Boot Key. Michael and Ida came up on deck and we dropped the anchor.

End
The next morning we pulled up to my home marina, cleaned up and said our goodbyes. I have a feeling that there are more adventures to be shared with Ida and Michael. I would invite them and Austin along anytime, and we had all shared in a great expedition. The weather, camaraderie, and environment had all conspired to create a memorable experience. I created this business with a focus on running adventurous multi-day trips. Thorfinn is not a large yacht but it really is the perfect vessel for exploration. It provides for an intimate experience. Anytime you can travel simply through beautiful coastlines you are doing something right. I often term our style of sailing/adventure travel as backcountry sailing and I am really excited to run more trips here in the Keys, Florida Bay, and the Ten Thousand Islands. If you get a hankering for a real adventure – give us a shout. We are ready to go.

Next up: A two-day trip and then sailing Thorfinn to Miami for the Boatshow and some demo sailing on the Ryder Boats, Presto 30. 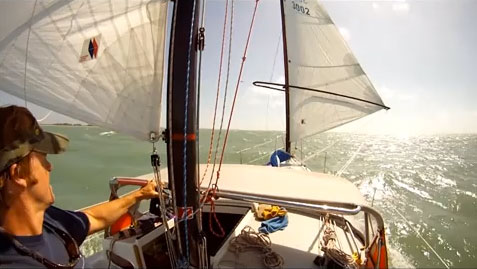 Sailing the Presto 30 along the Florida Coast

Photos of Thorfinn Expeditions Sailing the Wilds of Florida

Sailing the Presto 30 along the Florida Coast