To James H. “Jim” Clark, at least, size doesn’t matter. The generous yachtsman who owns the J-Class sloop Hanuman recently donated $150,000 each to two Newport nonprofits, Sail Newport and the Oliver Hazard Perry Rhode Island, fulfilling a promise to make such a donation if ever hired professional racing crews aboard his sailing yachts. Clark, an internet pioneer and co-founder of Netscape, plans to integrate Ken Read and members of his PUMA Ocean Racing Team into Hanuman’s crew for some upcoming Caribbean regattas.

Even better, Clark hopes his donations will inspire other yachtsmen to consider similar acts of philanthropy. “I have made it quite public that if I spend money on professionals to try and win a sailing competition, I will donate a comparable amount to a marine- or sailing-based charity,” said Clark. “Some of us are fortunate to own J-Class yachts, and if we all give back in the spirit of friendship, dedication to the sport of sailing, and devotion to the oceans that we use, perhaps we can have an impact.”

At Sail Newport, Clark’s donation will advance the opportunities offered at the public-access sailing center, including a scholarship fund that enables students of all ages to learn and enjoy the sport regardless of economic resources. From the tiny Optis used in the nonprofit’s nationally recognized youth sailing program to the J-24s and other keelboats used by adults, the Sail Newport fleet is one admired by residents of harbors near and far. “Jim Clark keeps his promise,” said Brad Read, executive director of Sail Newport. “All of us sailors have spent a lifetime enjoying the world’s oceans through the sport of sailing, and Jim’s enthusiastic leadership in contributing to the oceanic environment sets a tremendous example.”
Clark’s donation to Oliver Hazard Perry Rhode Island will help fund the ambitious construction underway in Providence, where the 230-foot (sparred length) three-masted square-rigger is currently taking shape. “The school ship Oliver Hazard Perry will serve as an ocean classroom for experiential learning by youth of all ages and represent Rhode Island’s rich maritime history,” said Dunbar. “We feel honored to be the recipient of such a generous donation and are glad to be in the company of Sail Newport, which has been so involved in the community and advancing youth education as well.”

We’ve all made grand promises over the years; here’s to actually carrying through on them! 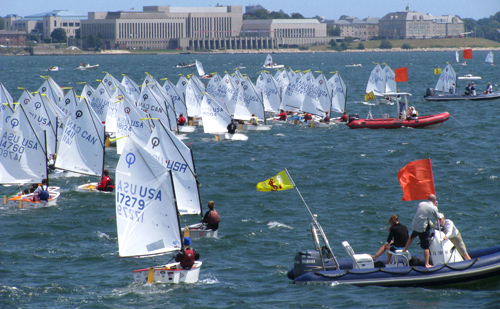 At Sail Newport, Clark’s donation helps Sail Newport offer a scholarship for students of all ages.

At Sail Newport, Clark’s donation helps Sail Newport offer a scholarship for students of all ages.