Kenway Corporation, which just last month announced that it was partnering with Rockport Marine and Brooklin Boatyard to bring a large-scale composites center to Belfast, has announced that it’s bought the Southport line of powerboats and will now be building them in Maine.

Calling Maine “a suitable location [for manufacturing Southport boats] given the state’s heritage of world-class boatbuilding,” Kenway plans to resume production of the 27- and 29-foot center-console and express cruisers immediately, with the Southport boats built alongside the company’s Maritime and Maritime Skiff family fishing boats. The first Southport boats built in Kenway’s Augusta, Maine, facility should be available in early May and will be built using advanced vacuum infusion closed-molding techniques, rather than the open-molding that had been used in the past. “At the end of the day, the new Southport owners are not just buying a typical production boat, they are investing in what we believe to be a blend of world-class craftsmanship and ultimate performance,” said Kenway Vice President Ian Kopp in a statement.

The Southport line of boats was designed by legendary designer C. Raymond Hunt to be the most efficient, comfortable, and capable offshore fishing boats available. Beamy, with deep vees, Southport hulls are designed to take advantage of the latest four-stroke outboard engines and include details like top electronics, modern styling, and are infused with possibly the most important element of all — a boater’s passion. “Perhaps the most important element of a Southport’s design is passion. And it is this passion that Southport has found once again as it moves to Maine where the heritage of boatbuilding craftsmanship and excellence is as long as the rugged coast line.” 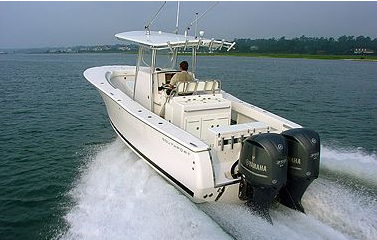