After 10 Years, Rebuilt Maine Tugboat Is Back to Work

Capt. John Foss couldn’t have asked for a more pleasant November day to launch Cadet, a tugboat that Foss has spent the past ten years rebuilding. With a crowd of friends, family, and schooner crews in attendance at Journey’s End Marine in Rockland, Maine, Foss’ restoration project slipped into the chilly waters of Penobscot Bay at high tide on November 26. She left the ways under her own power and was soon rafted alongside another of Foss’ floating accomplishments, the schooner American Eagle, at North End Shipyard.

Here is a brief history of Cadet, graciously provided by Foss at the launching:

“The tugboat Cadet was built in Kennebunkport, Maine, by Bernard Warner in 1935 or 1936 for the U.S. Army Corps of Engineers. She was designed by the Corps as a 40-foot motor launch, hull design No. 134. At some point she was sold to Ellis S. Snodgrass, who built the Cousins Island bridge in Casco Bay. The Cadet went on to be owned by Cianbro from 1969-1984 after which she was bought by William Clark as the Cadet Corporation in the Portland area. She was used last by John C. Gibson from 1984-1989.

“In 2001, John and Kathy Foss saw the Cadet in the parking lot at the Carriage House Restaurant in East Boothbay. They purchased the Cadet from George and Rosemary Bourette, the owners of the Restaurant. The purchase price was one dollar plus Kathy’s labor: sanding and repainting the Bourettes’ lapstrake boat. After spending many happy years as a centerpiece of the Perch Island Yacht Club parking lot, Cadet was trucked in July 2001 to the North End Shipyard by Frank O’Hara, Jr.

“John Foss and many crewmembers spent the next 10 years rebuilding the Cadet. Portions of the keel and lower framing are original. The builder’s grandson supplied the original plans.

“What will Cadet do next? John has a towing license, so he can actually do some work with the tug. Kathy plans to take advantage of the galley. If the library and the schooner can cope without the Fosses at some point, there will be cruising!” 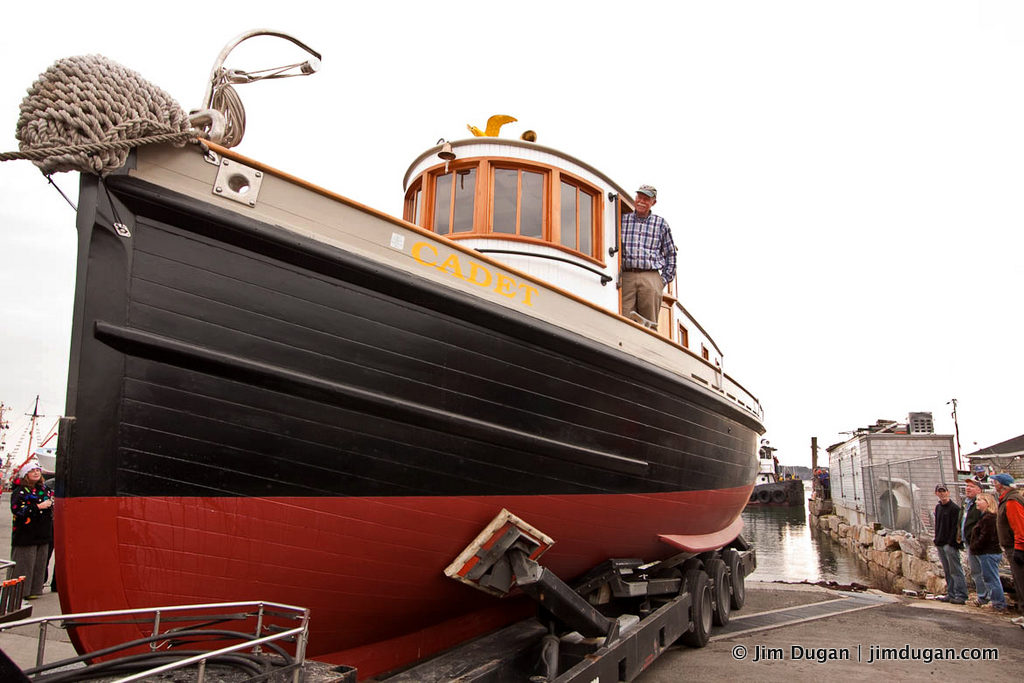 Capt. John Foss stands aboard the tugboat Cadet, which he rebuilt over a 10-year period.

Photos of After 10 Years, Rebuilt Maine Tugboat Is Back to Work 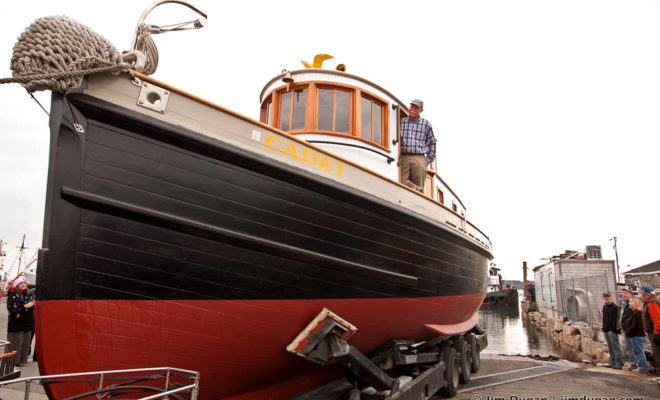 Capt. John Foss stands aboard the tugboat Cadet, which he rebuilt over a 10-year period.