In Search of Shelter on Monhegan Island

Monhegan Island — tall, prominent, and well out to sea — beckons in the distance. A familiar landfall coming from the south for us, on this late October day it would be our destination sailing out of Penobscot Bay.

I had an infallible plan. We’d spend the night in the harbor, on a borrowed mooring, protected from the strong northwesterly winds now driving us rapidly toward the island.

For relief from the building wind and seas, we sailed downwind in the lee of the island’s northeasterly side. With the wind whipping over the tall cliffs, the calm in the lee was like entering a canyon. As the steep shore slid slowly by, we made our way toward the little harbor on the southern end.

Not long after entering, it became apparent a mooring was not available. A lobstermen was very helpful, but she couldn’t locate an unused mooring in the protected harbor. I didn’t take it personally — there just aren’t good options for moorings on Monhegan island.

Our only option was a mooring out by Nigh Duck where the ferries sometimes moor. I’d spent a couple of good nights out there, in calm weather. How bad could it be?

The next day we pulled our dinghy up on Fish Beach, very, vey relieved to be on solid ground.

Trends come and go on Monhegan, but there seems to have been a sensible evolution on the island. Time goes on and on here, just like anywhere else.

Fishing and tourism make it tick today, not unlike the rest of coastal Maine. Monhegan and art go hand in hand.

No crowds, but despite the late season, there were quite a few visitors staying on the island for the day, or a night, or two.

Many of the small shops, galleries and the Island Inn were open. It’s a comfortable place to walk and hike the few roads and trails. The very few vehicles on the island, long ago retired from highway speeds, move at comfortable walking pace.

A ferry’s arrival changes the entire mood for an hour or two as new smiling faces and goods suddenly fill the nearby roads. “Could you believe the waves coming across?” I overheard once or twice. They had no idea.

It turns wilder quickly on the more remote trails but the island, at little more than a mile long, isn’t large enough to get turned around upon. At the top, near the lighthouse and museum, the wind rattled our windbreakers. The views over the ocean are impressive.

We went slowly around the island, stopped most everywhere, took photos, went into the shops, or sat to watch people — those from away, and those at home — go by.

Inside the inn over the harbor, we warmed up by the fire for a spell. It was cozy inside as the wind buffeted the windows on the harbor side. Lounging guests looked comfortable, rested and were enjoying off-season rates. Smart.

Far down the way, I thought I could just see the spruce masthead on Christmas, gyrating wildly above the treetops.

We love Monhegan and we’ll come again. But this time, a boat was too much baggage.

Back onboard later, we made a beeline for the lee of Burnt Island, not many miles away. Anchored there for the night, we recovered, in a most peaceful calm. 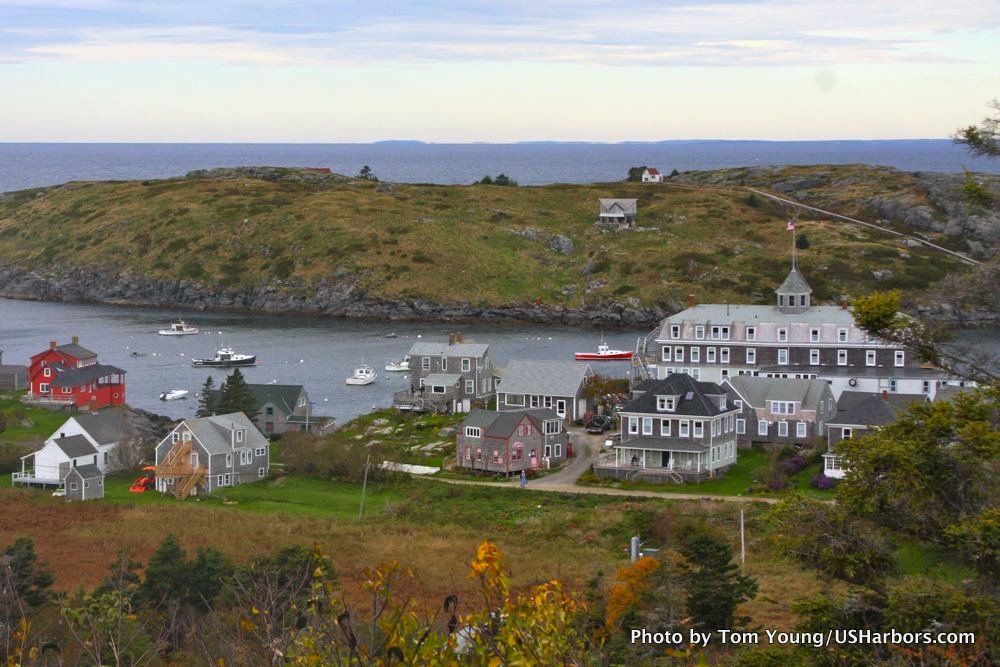 The view from the top of Monhegan, with Manana Island in the distance.

Photos of In Search of Shelter on Monhegan Island 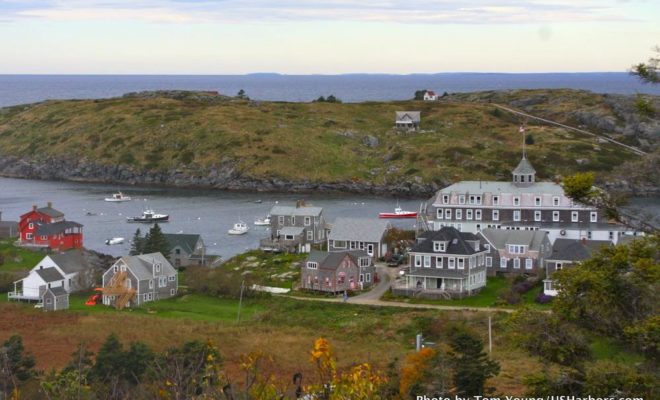 The view from the top of Monhegan, with Manana Island in the distance.