Enjoying the View from Isle of Hope Marina

My wife and I, along with our daughter, three dogs, and a cat, live aboard our trawler. We semi-retired in September of 2011 and cruised from Connecticut up to Albany, New York, and then wandered south. We cruised down the Hudson River, along the New Jersey shore, up Delaware Bay, down the Chesapeake, and then traveled the Intracoastal Waterway. The farther south we got, the better we liked it. We finally stopped in Savannah’s Isle of Hope Marina, which is right on the ICW.

One nice thing about living aboard a boat here on the ICW is the view. Isle of Hope is a quaint little town, which we have on one side. The ICW, marshes, and islands are on the other. Sunrises are almost always beautiful here.

We enjoy relaxing on the aft deck or on the flybridge, often with a glass of wine either before or after dinner (or sometimes both). We see dolphins swimming by, pelicans and seagulls diving for their dinner, and watch boat traffic passing by.

A small cruise ship came by on a regular basis over the winter. The 104-passenger Independence is owned by American Cruise Lines. She spends the summer cruising Maine, the fall on the Hudson River, and the winters in the south, cruising the ICW between Charleston, South Carolina, and Jacksonville, Florida.

Check out the photo of Independence. Can you imagine the ship coming toward you in a narrow section of the ICW?

I thought Independence would have a hard time with the 120-degree hairpin turn at Isle of Hope — the sharpest turn on the entire ICW — but she managed nicely with her thrusters.

We liveaboards often help transients who come in after hours when the dockhands are gone. Sometimes the current flows at a pretty good clip and it’s nice to have someone catch a line for you. Such was the case recently when we helped a couple of sailboats in, and then Enticer, an 85′ 1935 Trumpy yacht, arrived.

Isn’t she beautiful? She’s one of three Trumpys owned by McMillen Yachts, Inc. She is in bristol condition, absolutely perfect.

Their guests certainly have a beautiful yacht to enjoy. Sorry that the photo of the couple is a little out of focus. I discreetly took their pic and I didn’t want to disturb them with a flash.

Later, R/V Anna pulled in on the other side of the dock from us. Not “recreational vehicle,” in marine lingo it means “research vessel” and Anna is part of the Georgia Department of Natural Resources’ fleet.

A dog’s sense of smell is 400 times better than a human’s. I imagine there were all kinds of smells on Anna because our dogs immediately needed to check things out.

Shrimping had been banned since January of 2012 in Georgia’s waters because of a decline in the population of market-sized food shrimp. Anna was sampling the four types of wild Georgia shrimp (white, brown, royal red, and pink) to determine the current population. It improved, and DNR reopened the shrimp season on May 30, 2012.

Wild Georgia shrimp are fished in their natural environment, not farms. According to the National Marine Fisheries Service, thousands of U.S. shrimp industry jobs have been lost to shrimp imports and thousands more are threatened. From now on, when in a restaurant I’m going to ask if they offer wild Georgia shrimp or shrimp imported from a yucky pond. 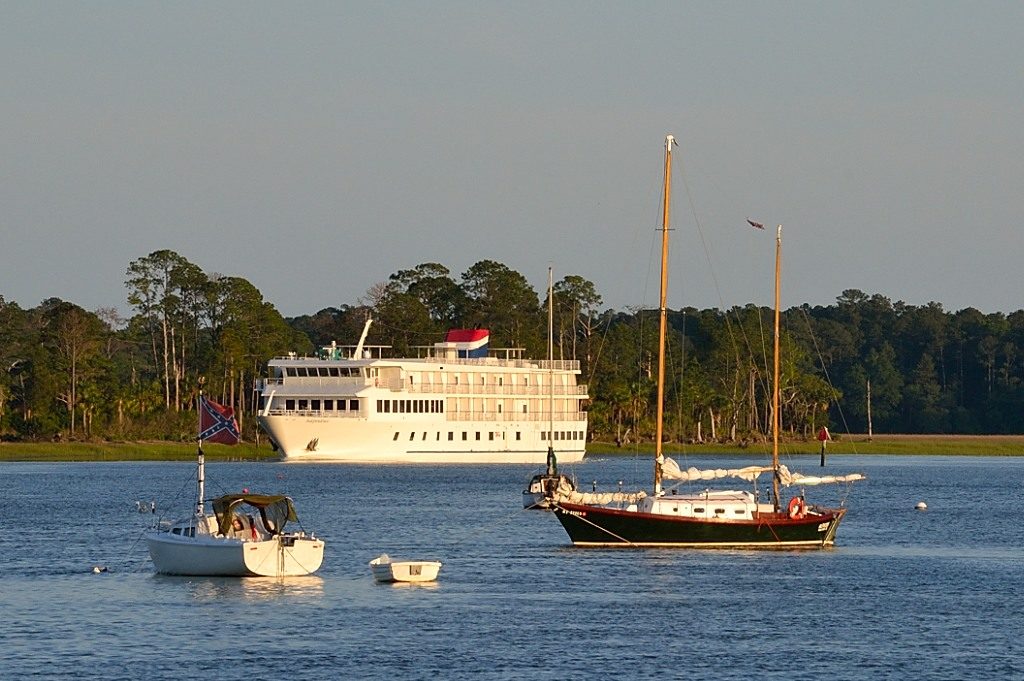 Photos of Enjoying the View from Isle of Hope Marina 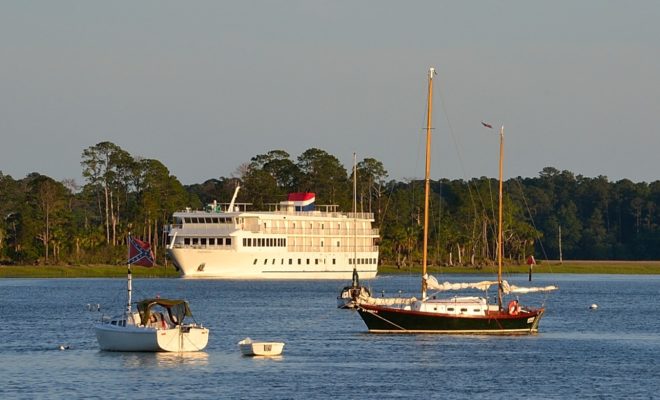