Paddling with the Puffins of Petit Manan 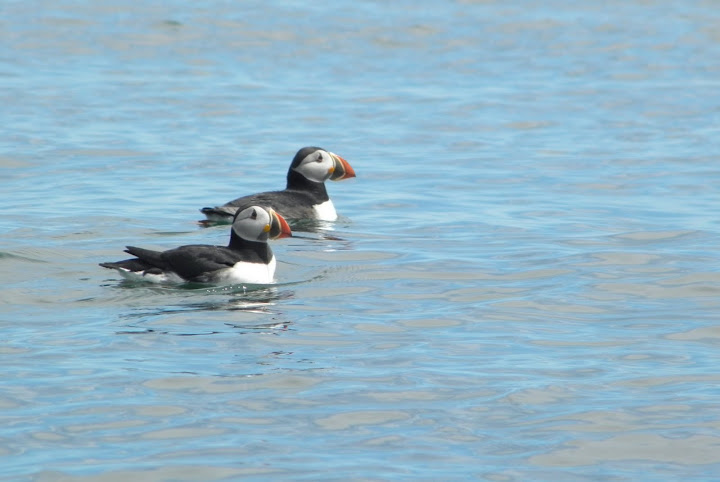 We rose at dawn and drove to a rocky beach south of Steuben. We donned the thick black wetsuits needed to paddle safely in 50 degree waters, launched from the rocky beach, and paddled south along Petit Manan Point, all the while monitoring the weather on the VHF radio, as this area is renowned for fog and turbulent sea conditions.

Manan means “island out to sea” in Micmac — and, amidst that landscape in which the mainland recedes in all directions, the name seems highly appropriate. The 120-foot spire of Petit Manan lighthouse provides a singular reference point amidst that big sea. We diverted our course to the west to trace the shoreline of adjacent Green island, our eyes alert for puffins, but there were only hordes of jeering gulls on the shoreline.

Then we moved onto Petit Manan itself, which is connected to Green by a series of bouldered ledges at low tide. We saw only guillemots, cormorants, eiders, terns, and laughing gulls. We saw the puffin blinds used by the U.S. Fish and Wildlife Service naturalists. We scrutinized the rocky shoreline for sights of puffin nests. We scanned the sky and the water for puffins. And saw none.

By this time, we had circled three-quarters of the way around Green and Petit Manan. We had just about resigned ourselves to not seeing the puffins. Then we rounded the southern tip to the area of Petit Manan reef. Suddenly the sky was alive with Atlantic puffins torpedoing through the air as they circled from the cliffs to our left, swooped out over the the shallow waters of the reef, and then wheeled back toward the lighthouse.

We rested our paddles on our kayaks, marveling at the sight, and ineptly trying to take photos of the fast-moving birds. Puffin flight is best described as frantic. These foot-tall relatives of penguins have short wings and long stout bodies more adapted to swimming than flying. In flight, their wings, which flap at up to 400 beats per minute, are only a blur. The short wings don’t allow puffins to soar or float in the air. Instead, they dive-bomb through it at speeds of 40 to 50 miles per hour.

Seconds turned to minutes. The sun filtered more brightly through the clouds. Gentle green swells lifted and lowered us as they passed toward the cliffs. We pulled our eyes out of the viewfinders of our cameras and lowered them from the sky to the water. The tidal current had slowly eased us to the north. The water around us was suddenly, magically, full of puffins.

Undisturbed by us, seeming to accept our presence, they drifted in groups, preening and puffing and dipping their heads beneath the surface.

Of Maine’s 4,000 islands and ledges, puffins nest on fewer than ten. Once they leave those nests, they spend up to five years far out at sea before ever returning to land. To say they live on the periphery of human civilization is an understatement. To spend a few minutes among these rare and marvelous birds is a privilege and a gift. Part of that gift is the reminder that beyond the human world lies a much larger one, of which both we and the puffins are just a tiny part.

Posted May 23, 2012 by Anthony Codding & filed under Boating, Nature, Travel.

Photos of Paddling with the Puffins of Petit Manan 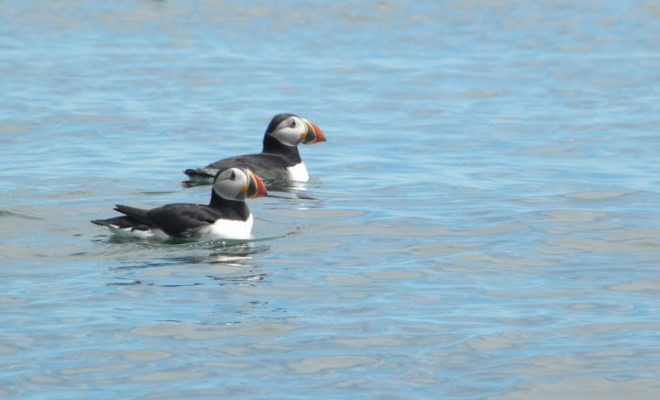