There are fish in these rivers.

In the Kennebec, the Penobscot, the rivers in between and either side, the alewives are running.

I wrote a story about alewives for the May issue of Fishermen’s Voice, well before alewife season began. Now I want to see the fish.

Yesterday I stopped by the run at Benton on the Sebasticook River. Leaping fish flashed silver along the shoreline; hopefully they will still be there for this weekend’s festival. The alewives are coming in from the sea, swimming upstream against the current, destined for their spawning grounds in freshwater lakes. Blueback herring are running, too, but they tend to spawn in large rivers. It’s hard to tell the difference.

Today I went to see Seven Mile Stream, which flows out of Webber Pond in Vassalboro. Zeb Woodbury was tending the fish ladder, a straight chute that angles up to a concrete pool where fish are scooped out with a net on days when the fishery is open.

Jeffrey Pierce was not at his run on the Eastern River in Dresden, so I kept driving south to Woolwich, to find the smoked alewives advertised in a Bangor Daily News story.

I followed the gulls to the fish ladder on Nequasset Creek, but no one was there. Except alewives, surging upstream, shooting up the final stretch of whitewater, dark gray against the current.

From Woolwich I headed east, to the grandaddy run of them all, at Damariscotta Mills, the model for alewife restoration. Their alewife festival is still two weeks away but the fish filled the rock-lined switchbacks, protected from the gulls by nets draped across the channels.

Then I went to see the stream that flows from Muscongus Bay into another Webber Pond, in Bremen, where David Wilkins is working to bring alewives back. Wilkins wasn’t there and neither were alewives, probably because they can’t make it up through the giant, elevated culvert beneath Route 32 without Wilkins and his ladders.

One more stop: another attempt to obtain smoked alewives from a rumored stand on Route 1 (“across from Moose Crossing, on the left, a big hand-lettered sign”). I found Myron Springer selling fish from the St. George River in Warren.

On the way home, I wondered if the fish were running as strong in the Penobscot, and farther Downeast. Are they running near you? 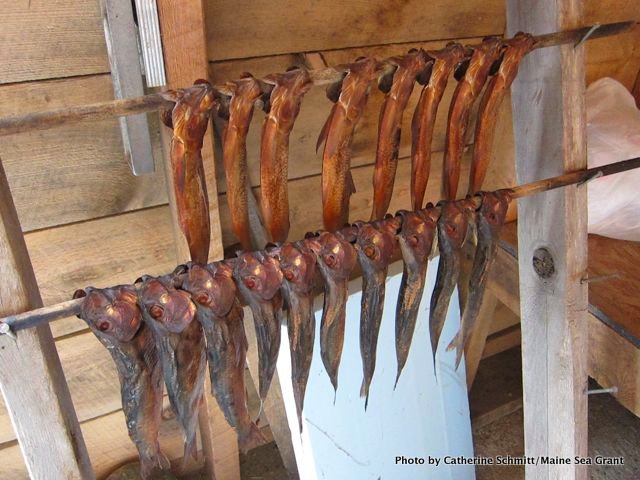 Photos of Signs of Spring: Alewifes Return to Maine Rivers 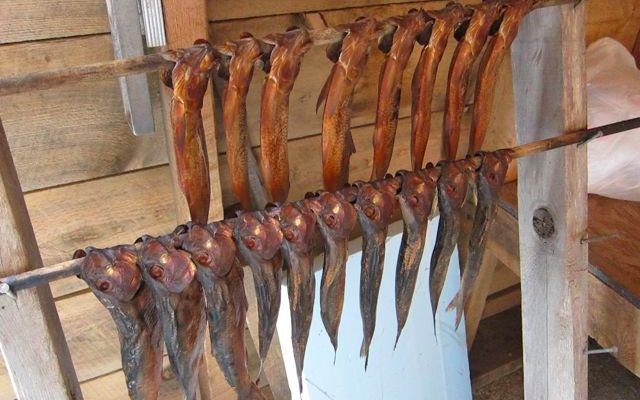