Spring Traditions on the Coast: Hauling Out 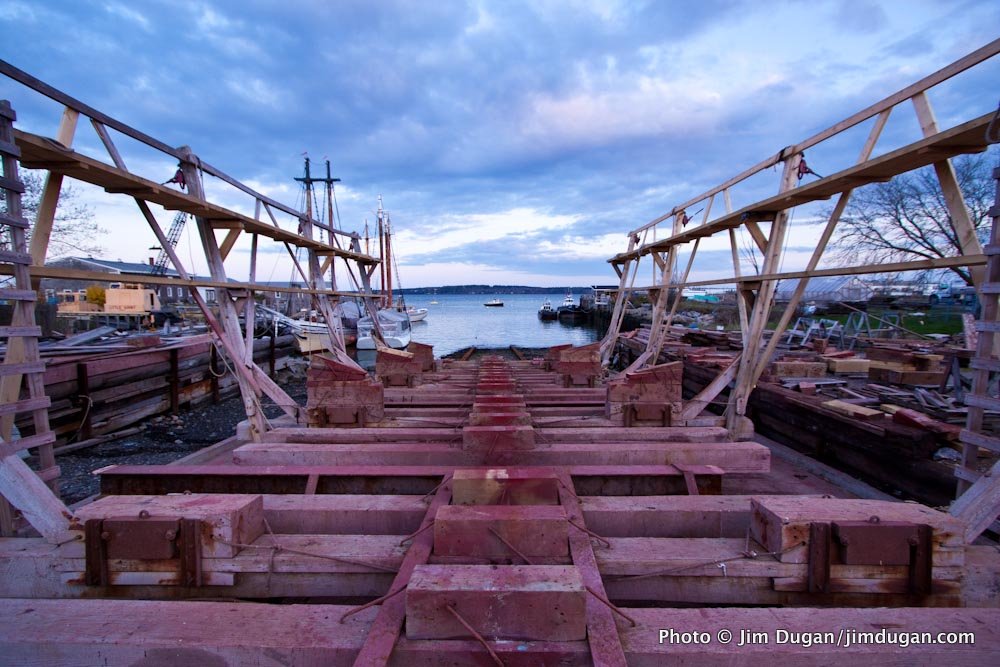 The railway at North End Shipyard in Rockland, where most of the large working schooners on the coast of Maine haul out.

Every year, the windjammers that take tourists for sailing adventures on the coast of Maine must “haul out” for a few days at least. This is the only time to take care of anything below the waterline. It’s a process of cleaning, repairing, and repainting the hulls. Most of the boats have wooden hulls, and all of them need at least some work every spring.

The schooner Mary Day was first launched in 1962 so this year is a bit special all around, being her fiftieth season. She hauled out for four days on the marine railway at Rockland’s North End Shipyard in April.

The railway extends into Rockland Harbor and a cradle is dragged (by a series of cables and a motor on shore) down the rails into the water. Large wood blocks have been put in place to accommodate the boat, which is driven onto the cradle at high tide. The cradle is then hauled back up, above the high tide line, where work begins.

After a quick pressure wash to get the first, easy layer, hand scraping begins. This removes any old bottom paint that comes away easily. It’s a dirty job and masks and respirators are worn. (To watch a short video of this process, click here.)

Sometimes whole planks are removed and new ones installed. Sometimes, the caulk between planks is replaced. Caulking is done with ancient tools, special skills, and tarred hemp fiber called “oakum.” The oakum is tapped carefully into place to keep water from seeping between planks.

Once all that is done, seam compound (putty) is squeezed into all seams and voids and the hull is coated with ablative bottom paint. “Ablative” just means that it’s easily worn or sloughed away, which is what you want when barnacles are trying to hold onto it. (To watch a video of Captain Barry King explaining oakum and demonstrating the tools and skills involved in caulking and painting, click here.)

Yard time is labor-intensive. The hours are long and friends are called on to help out. There’s plenty of coffee, doughnuts, pizza, Chinese food and even a little beer at the end of the day, when the work is done.

Posted May 10, 2012 by Ralph Peterson Peterson & filed under Boating.

Photos of Spring Traditions on the Coast: Hauling Out 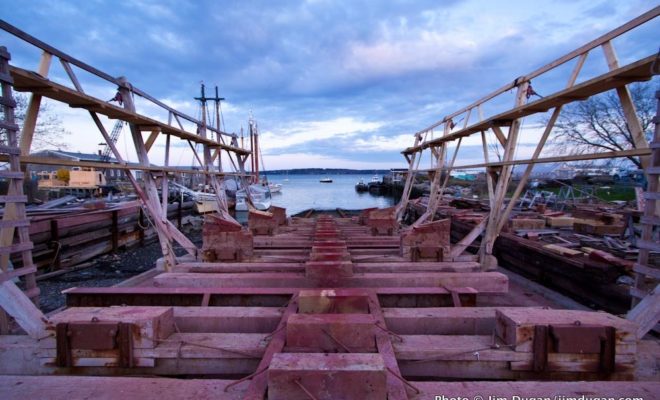 The railway at North End Shipyard in Rockland, where most of the large working schooners on the coast of Maine haul out.