In addition to the large yachts, gorgeous furniture, and other examples of fine craftsmanship on display at the Maine Boats, Homes & Harbors Show in Rockland August 10-12 will be a yacht that is sure to be one of the most envied at the show. Artisan Boatworks, which specializes in the construction, restoration, maintenance, and storage of classic wooden daysailers, has just launched a brand-new Buzzards Bay 18 — the first of these stunning Herreshoff sloops to be built since 1904. The show will be the last opportunity for the public to ogle, examine, and talk about the new yacht with its builder, Alec Brainerd, before it goes off to its homeport of Cape Elizabeth.

The original five Buzzards Bay 18s were built by the Herreshoff Manufacturing Company in 1903-04 for the Beverly Yacht Club of Marion, Massachusetts. Essentially an enlarged version of the 24.5-foot E Class, they measured 29 feet on deck, with an 8-foot, one-inch beam. All the original yachts have long disappeared, to so create the new yacht Brainerd had to pull the lines off an original builder’s model at the Herreshoff Marine Museum in Bristol, Rhode Island, and plans maintained at the MIT Museum’s Hart Nautical Collection.

Though Brainerd was able to preserve the lineage of this gorgeous daysailer, now named Uncas in honor of the last sachem of the Mohegan tribe, he incorporated some modern touches, too. A Beta 14 horsepower inboard will power it when the breeze dies. The mast, though faux painted to resemble the original sitka spruce, is actually built of carbon fiber. Finally the underbody features a full keel designed by Mark Fitzgerald of Camden, an enhancement that Herreshoff adopted after the completion of the original five Buzzards Bay 18s.

Do yourself a favor and drop by this remarkable craft at the Maine Boats, Homes & Harbors Show. 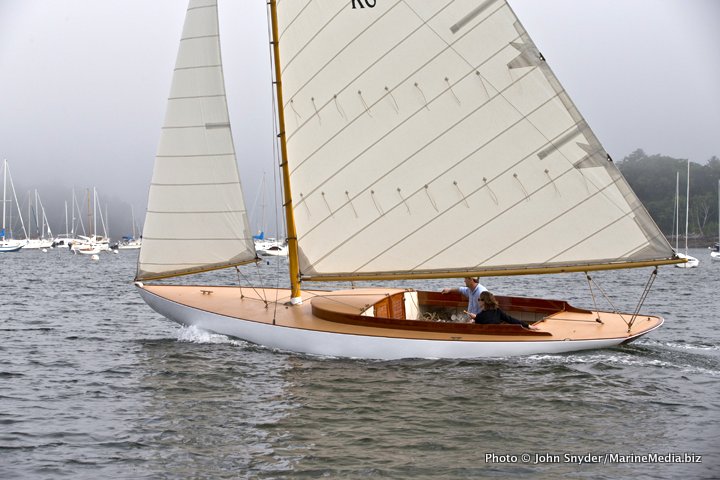 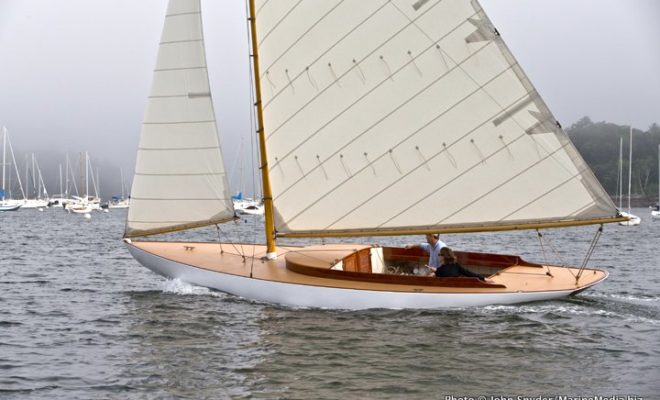