Sailing to Maine: Across the Gulf!

The coast of Maine is a world-class cruising destination. If your boat is in southern New England, this vast cruising ground is your backyard. Boats with ample time can enjoy the interesting coastline of Massachusetts and New Hampshire, exploring harbor to harbor, on their way to Maine (stay tuned for another USHarbors article to follow).

But what about the shortcut across the beautiful Gulf of Maine? The straight line from the Cape Cod Canal to Penobscot Bay is about 150 nautical miles. Making Penobscot Bay your destination has several benefits. Distances don’t vary widely between southern Maine and Downeast Maine across the Gulf. Once inside Penobscot Bay, the cruising boat is free to roam in any weather. Penobscot Bay offers protected island thorofares, reaches, and countless routes which allow sailing to various destinations inside the bay itself as well as the Blue Hill and Mount Desert Island area. Finally, when headed Downeast, stretch your sealegs on the prevailing southerly winds. Those same winds will likely be on your nose on the way home, making harbor-hopping through beautiful southern Maine a good plan on the return trip.

An overnight sail across the Gulf of Maine can be a pleasant, time-saving passage for experienced boats as well as the perfect first overnight for an aspiring crew. Your marine weather forecast is everything in crossing the Gulf. Odds are good that a Maine-bound sailboat will ride on a southerly breeze and following seas. Whatever happens, every trip across the Gulf of Maine is a fresh story.

Three years ago, my college-aged daughter and son joined me to sail from Rockport, Maine, to Cape Cod. We’d made the trip before but this time, with southerly winds forecast, instead of motoring southward overnight to Provincetown, Massachusetts (a typical plan for us), we decided to allow ourselves extra time and sail across.

“How about we allow 36 hours to get there?” I suggested. “Sure, Dad.” It was unanimous. I knew they’d be game. Since they began sailing as papoose-sized packages that we safely stowed aboard, they’ve preferred being under sail. We raised sails in the light morning southerly and headed, generally, southward. The light southerly filled in during the day as we ticked off mile after mile and watched the coast of Maine slip away in our wake.

As dusk began to fall, we swung onto our second tack, toward Isles of Shoals, out of sight about 45 nautical miles due west. Our sails and course were set for a combination of speed and a comfortable motion through the oncoming waves. Christmas ran toward the orange globe setting over New Hampshire.

Isles of Shoals‘ light became visible in the ink-black darkness, 10 nautical miles off our bow where we steered through the wind, once more, and onto our third tack. Christmas began rolling into the 15+ knots of southerly breeze as the kids slept soundly below in their pilot berths. Our speed was fantastic and made for a comfortable and powerful path southeasterly, splitting the endless swells ahead. I could see our present course would carry us to the east of Cape Cod. But that was no reason to spoil a good fast night sail, at least not yet.

Then, in the wee hours, the southerly headwinds began to clock, slowly, into the southwest. In slow increments, I poked the “>” key on the wheelpilot. Beep by beep, degree by degree, our course turned more westerly, as Christmas picked up speed through the night. In the dark cockpit, dry under the dodger, I watched the chartplotter as the image of the long hook of Cape Cod slowly crept eastward, across the top of the little screen.

Dawn broke over our frothy wake as we entered Cape Cod Bay at hull speed with Provincetown now well off to port. Over breakfast in the cockpit, we slacked off the sheets and rode a roaring beam reach nearly into the mouth of the Cape Cod Canal.

That was our longest trip across the Gulf, about 180 nautical miles. Yet this was our fastest passage of several between Cape Cod and Penobscot Bay, and it’s one we’ll never forget. 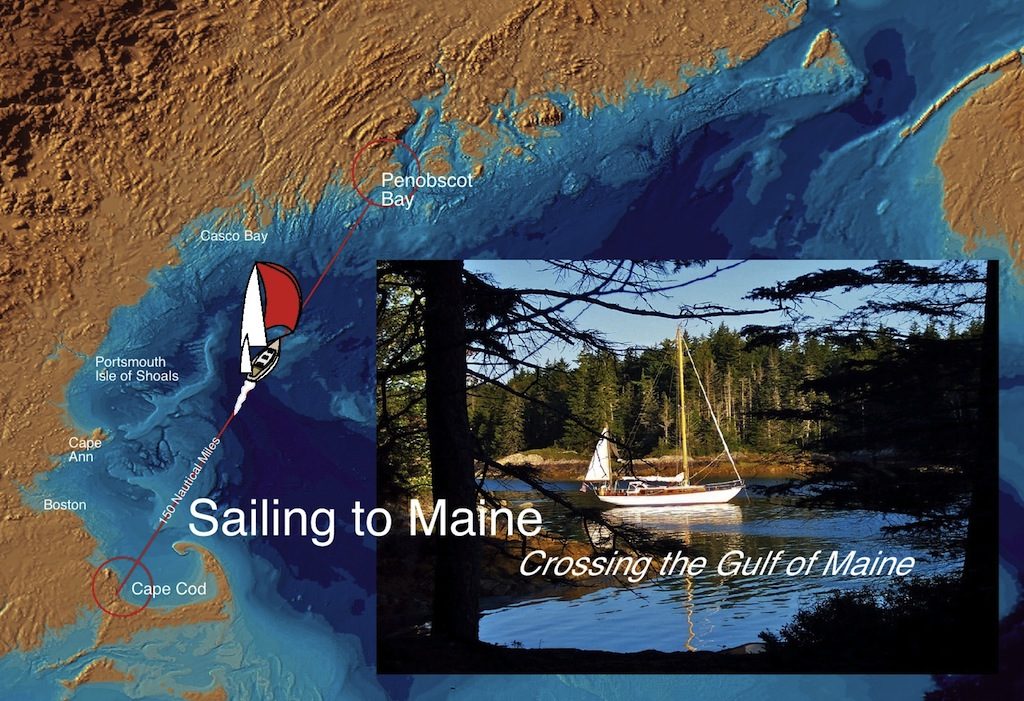 Every sail across the Gulf of Maine is a fresh story.

Photos of Sailing to Maine: Across the Gulf! 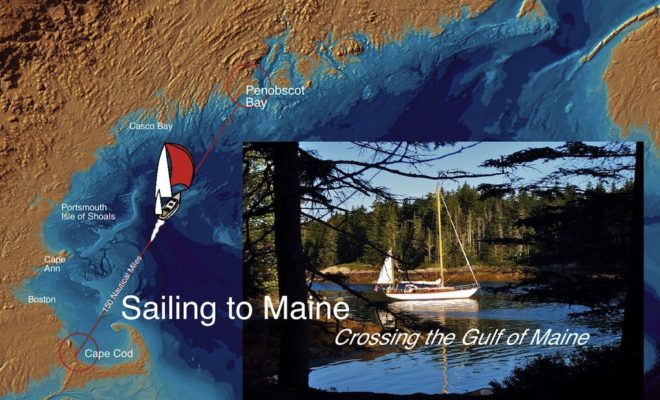 Every sail across the Gulf of Maine is a fresh story.