It’s been a good few days for big fish in the Bay. Good numbers of large stripers from 34-40 inches and big alligator blues in the 10-15 lb. range are chasing schools of large menhaden that are popping up here and there in ‘Gansett Bay.

We’ve been on it for the past several days. On May 31, my brother Steve hit a big slug of fish and landed five stripers up to 40 inches and another six bluefish up to 15 pounds all on menhaden (either livelined or chunked). We went back out June 1 with my son, Ben, and we landed anther five keeper bass and one very large bluefish. The big problem we had was that blues kept chopping up our live offerings but would not take the chunk. Occasionally, an aggressive striper beat the blues to the offering.

The key to this hot fishing for big fish is to find the schools of menhaden, or pogies, which seem to be around an area one day and gone the next. After quite a bit of looking, we found a real glut of them yesterday in an off-the-beaten-path spot that few people fish. There were so many that you could see masses of them under the boat at times. Snagging all we wanted was no problem. In fact, several times we would snag one and the line would get another one in the gills and we’d haul two aboard. The large fish were often around or even right under these schools and you would see occasional explosions of the large feeding fish in the menhaden schools.

While I’m at it, I wanted to mention a lure that has worked for me recently. The popper has not exactly been a great plug for me this spring, but it was the best plug in my bag during an outing early last week. I was fishing some shallow water in the Bay with a bucktail jig and a Zoom fluke with no success. Then, I spotted a couple of fish breaking after bait way out in front of me. I went right for the popper, a good choice when stripers are chasing bait on the surface in the spring. The plug I used was a four-inch Creek Chub popper, one of those $2.50 specials that I picked up at Walmart. Small poppers on light tackle are a good bet in shallow water spots in the Bay. Well, they jumped all over this plug that night with some spectacular hits. I landed quite a few hefty schoolies in the 20-25-inch range, good size fish on my light outfit with 10-pound test mono line. 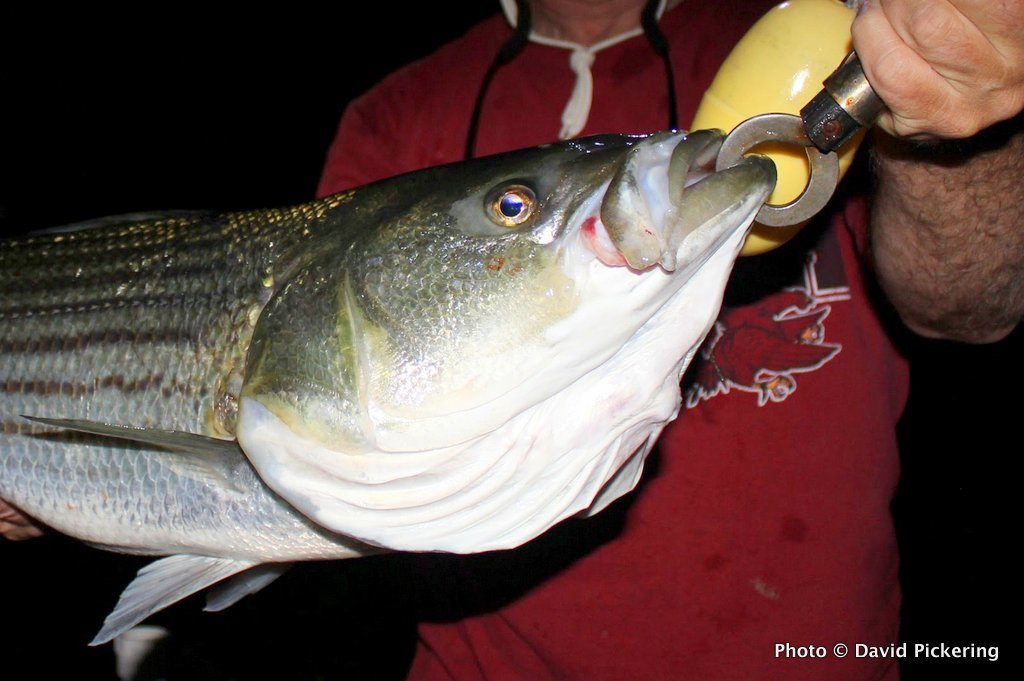 Large stripers and some alligator blues have been chasing schools of menhaden into Narragansett Bay.

Photos of Striper Report: Big Fish Under the Menhaden 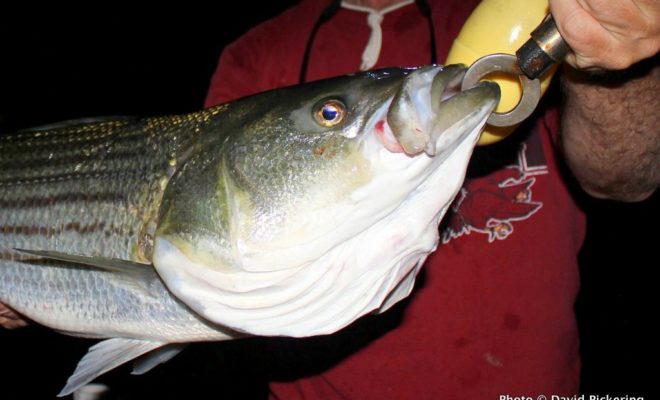 Large stripers and some alligator blues have been chasing schools of menhaden into Narragansett Bay.