Circumnavigation of Pulpit Harbor, In a Tiny Boat

What could be finer than sailing a Joel White Nutshell Pram through Pulpit Harbor beneath an expansive Maine blueberry on whipped cream sky? Taking the dogs along!

Call me crazy, but I think our dogs love sailing. Eve, our Nutshell Pram that delighted our two tiny kids nearly 20 years ago, has gone to the dogs.

No surprise they love it. Like little kids, dogs have simple desires. A dog’s powerful eyes have an unfettered view of it all going by on the water. A little sailboat is quiet, allowing their acute ears to scan for distant dog-related sound waves. And the endless scents in the wind that dogs crave to explore are strong on the water. A dog’s sense of smell is their wifi, and we could tell by their active nostrils — the scents on the water were four bars strong.

With so much enthusiasm aboard Eve, a circumnavigation of Pulpit Harbor was in order. In a 9’6” boat, Pulpit is a vast water body. We sailed close enough to touch the lawn chairs on a floating lobster shack and the sterns on visiting yachts. Pulpit Harbor‘s headwaters can be rowed for nearly a mile at high tide, but our air draft prevented going below the bridge today.

Running, reaching, tacking, all points of sail were needed as we hugged cedar edged shorelines that reminded us of Adirondack lake shores. Tacking quietly through lobster boats and yachts, we were not even noticed by many aboard in the busy outer harbor.

Broad reaches took us deep into coves you may not notice from a bigger boat. Cabot Cove can be sailed to another head water where a babbling brook is easy to hear from a quiet sailboat. With a few shore stops along the way, it took a couple of hours to girdle the shoreline.

For the grand finale’ we sailed for lonely Pulpit Rock into the late afternoon sun. From a tiny sailboat we watched cormorants just a few yards away stay glued to their rock stands, unfazed by our presence, as they dried their wing feathers.

A 2013 fledgling osprey finally lifted off Pulpit Rock as we approached, more in pride than fear, I like to think, in showing off his new flight skills. As we got closer, we could see the twig-and-branch-constructed osprey nest was massive — enormous really, atop the gleaming wet rock pulpit.

With one final swing of the tiny tiller off Pulpit Rock, we caught the southerly wind on a tightly sheeted tanbark sail and headed for our anchored home.

I looked behind to the see the fledgling osprey lightly touch back down on the harbors ancient centerpiece in the setting sun. It was a perfect sail and everyone aboard Joel White’s little boat, was delighted. 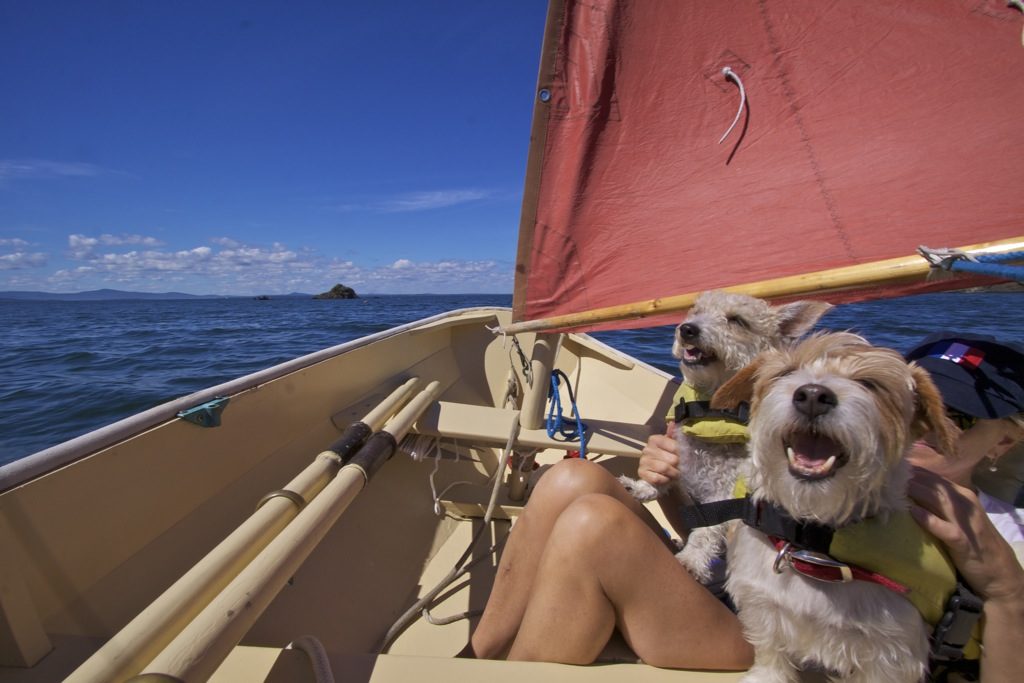 Why are these dogs smiling? They're sailing in a Joel White Nutshell Pram.

Photos of Circumnavigation of Pulpit Harbor, In a Tiny Boat 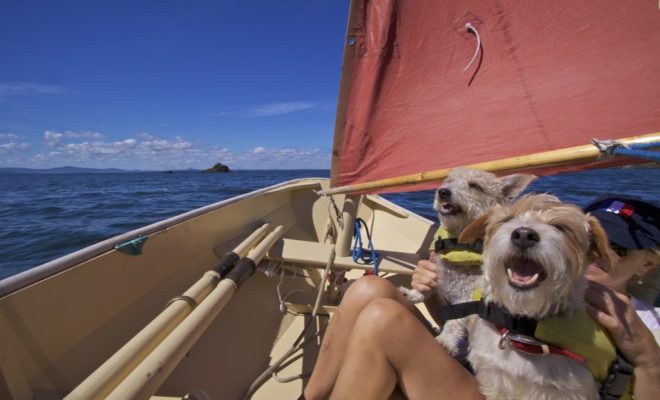 Why are these dogs smiling? They're sailing in a Joel White Nutshell Pram.