Enjoying the Excitement of an August Striper Blitz

My brother Steve and I went out during the evening on August 14 in the boat along the RI oceanfront. Instead of going way offshore in deep water, we fished close to shore in about 20 feet of water. We hit the biggest August blitz of stripers I have ever seen. It was as good as any October blitz I have ever witnessed. There were several big flocks of birds, sometimes over a hundred at a time, hitting the water in a wide area, and there were stripers of all sizes busting for bait right under the birds. It appeared that the bait was small sandeels from what the bass were spitting up, but you saw nothing in the water. Where the fish were not busting, the fish finder was lit up with fish under us, sometimes ten feet thick. Surprising thing was that there was not another boat around us at the height of the fishing!

And, yes, the fish were hitting. We lost count as to how many we landed. The hot lures were sandeel imitators. Kastmaster XL, that long and skinny version of a Kastmaster, was hot until a couple of blues cut them off. Five-inch Zoom flukes mounted on a jighead were also hot. I was using a Red Gill teaser ahead of my lure and that was catching them, sometimes double-headers at times. When the fish were breaking, we would cast into them and they would aggressively take right away. When nothing was showing, we would lower the offering to the bottom and bounce it as we drifted along. When the fishfinder showed fish, we would be on. These fish were all sizes, but the average seemed to be about 24 inches. We had some keepers in the mix and some smaller ones, too.

This was my most recent successful outing, but I have been getting out fishing on a regular basis now and have been having success from the shore, too. I went out during the evening on August 13 to the oceanfront expecting to find some rough water but was greeted by a dead-calm sea. So, I made the most of it, opting to toss a small bucktail jig in the hopes of catching stripers and fluke. And, I did catch good numbers of both these fish.

Here are some observations of what has been going on recently:
•There are good numbers of schoolies just about everywhere along the oceanfront. This is unusual for August. These are small fish in the 10-20-inch range.
•Keeper bass are in very short supply from shore.
•There is little bait around. Last year, the oceanfront was choking with bay anchovies at this time. I have seen none so far, but remember that this is usually a bait that comes around in September.
•There are loads of snapper blues around, but the larger bluefish are scarce from shore.
•Fluke are abundant but small.
•Reports of false albacore are false. You won’t see them around close to shore until September.
•Where are the fishermen? I have never seen a year with so few fishermen fishing from shore. Heck, even the bottom fishermen are not around. That should tell you a lot about what’s been going on.

Maybe it’s this current shot of cooler nights that has gotten things going. However you slice it, the fishing is definitely on the upswing, and you know it will only get better once we add false albacore to the mix. 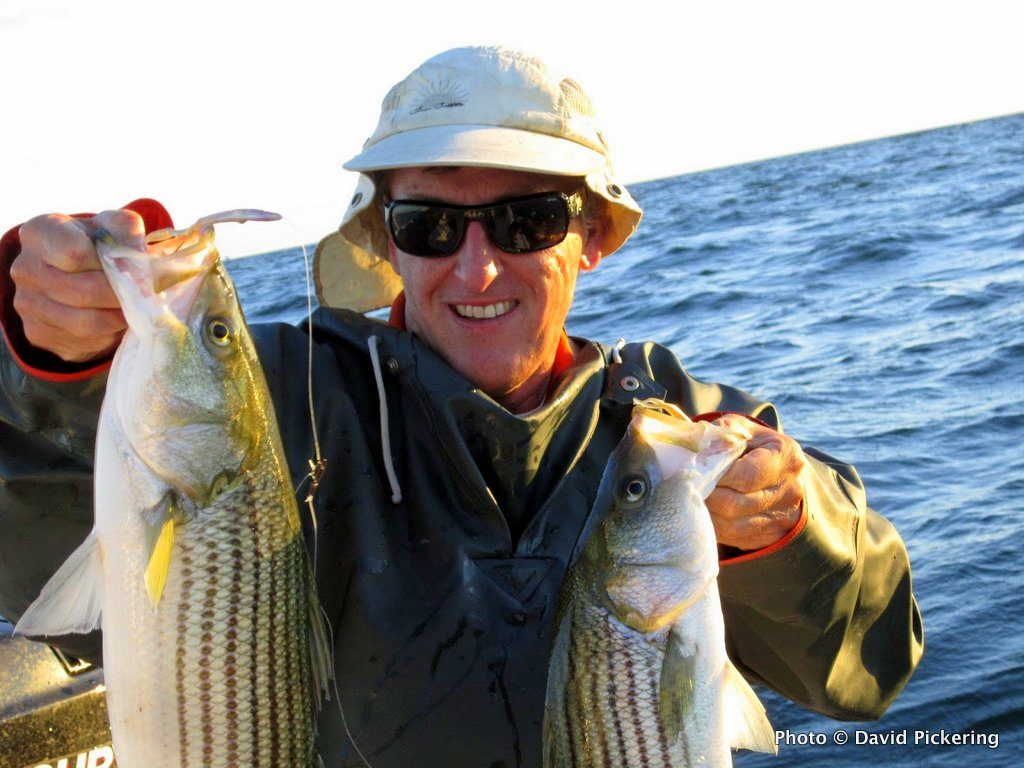 A Zoom fluke along with a Red Gill teaser landed this double header.

Photos of Enjoying the Excitement of an August Striper Blitz 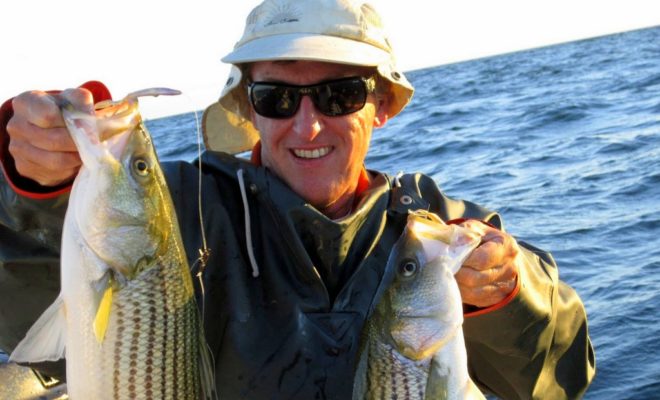 A Zoom fluke along with a Red Gill teaser landed this double header.