At Last, a Phenomenal Day of Striper Fishing

After a serious striper drought recently, we finally hit an incredible day of striper fishing on September 29 from the boat. I have said all along this fall that the bait and the fish seem to be hanging way out away from surfcasters. It was proven today as we fished in water that was generally 15-20 feet deep. There we found incredible numbers of stripers. In all, my brother Steve, my son Ben, and I landed well over 80 stripers! At least 35 of those fish were keepers. Many of these keepers were hefty fish in the 32-37-inch range.

The big hit of fish almost didn’t happen because these fish were not showing. We were traveling along a shoreline along the mainland when my son Ben spotted a fish that broke water. We stopped the boat and started casting. Almost immediately we hooked up with decent fish. Schools of them would show up on the fishfinder down deep, and when they showed it was a sure bet to get them. They were so thick in places that all three of us would hook up at once on a drift. These fish were all caught drifting and casting super Zoom flukes mounted on 3/4-ounce jigheads. This fishing continued for hours. We never saw big numbers of fish jumping, found little bait, and saw no birds were working, but the fish were around big time. It proves you just have to work some spots to find the fish, and we did that in a big way.

Compare this with my recent experiences shore fishing, which has been way, way off. In fact, I will tell you that this has been one of the poorest Septembers that I have ever seen in recent memory. Between myself and my two youngest sons, we are fishing every day of the week. We are fishing both daytime and nighttime and cover the south shore beachfront as well as the rocky shores of Gansett. Here is what is going on:
• Bait continues to be a big problem. There are small pods of bay anchovies here and there, but their numbers are way off. These pods have been hanging out well past casting range for the most part. Every once in a while the bait comes close to shore, like when my son Jon landed 16 schoolies in a little over an hour in one small area. Most days, it didn’t happen.
• Keeper bass are scarce from shore. Most of the stripers around are schoolies. They are generally small, averaging about 20 inches, but their numbers are off compared to past Septembers.
• Bluefish are scarce. Hey, not much bait, not much blues. Pretty simple.
• False albacore are nowhere to be found. I’m writing them off. A big slug of them does not suddenly happen in October. Their numbers generally build during September and we are at zero right now. Without a lot of bait, there will be few or no albies.
• There are rumors around about mullet in some of the breachways. If you can find them, you have a good shot at larger fish. I have not seen any yet. 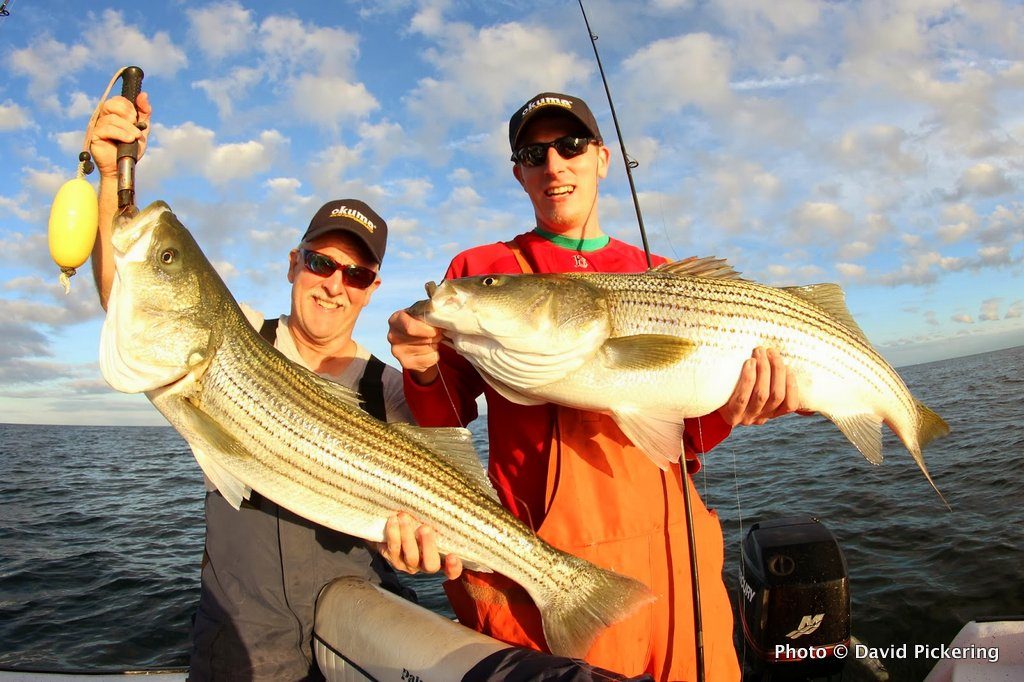 Two keepers from a haul of 80 stripers in an afternoon/evening of fishing along the RI mainland shore.

Photos of At Last, a Phenomenal Day of Striper Fishing 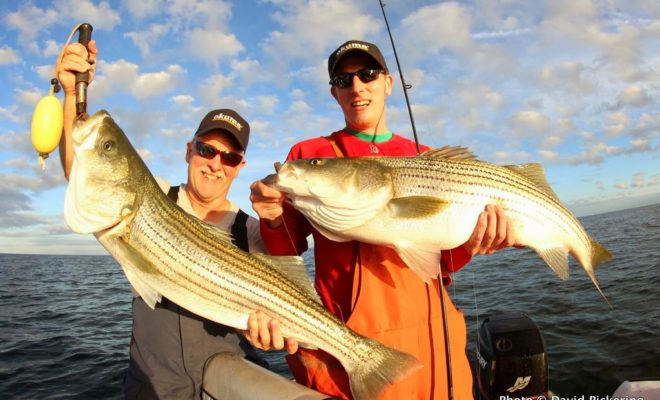 Two keepers from a haul of 80 stripers in an afternoon/evening of fishing along the RI mainland shore.