Stormy Voyage to Boston Across the Gulf of Maine

We had sailed a rollicking 80 nautical miles out of Port Clyde in just 10 hours. Then the GPS flashed 12.1 knots, as we surfed down another big wave. The fun was over.

I had put my daughter and I in a pickle. With just the deeply reefed main up, running with the wind and waves since noon, I was spent. Mary Jane was valiantly fighting seasickness and helping me all she could, but wrestling the wheel was out of the question for her. In fact, I was having difficulty steering down some big waves in the pitch-dark night. And then I gybed.

The preventer we had rigged from the boom end to the deck was overpowered, the boom rose and smashed into the back stay. Everything held — this time.

It was time to heave to. With Mary Jane on the bridgedeck and in the companionway (just in case), I spun the wheel to starboard on top of a wave while yanking the full length of the mainsheet. Grinding under the dodger, MJ had the mainsheet winch singing, and in what seemed like just a second, we had Christmas dead into the wind and waves, and the main sail sheeted bar-tight.

The small sail shuttered, we fell off to port, and the boat settled. Christmas had plenty of power to hold us 45 degrees to the wind and waves. There was a lot of spray overhead and rolling down the decks, but we were solid and safe now. No picnic riding over the seas, but I was pretty happy to fall into a comfortable seaberth below. My arms were very, very happy!

Christmas did the work for the next three hours, heading westward at about 2 knots, toward Cape Ann, 40 miles away. After 1:00 a.m., the winds had abated, we’d gotten some much-needed rest and even slept. MJ had worked through seasickness and was raring to go!

So we got back to work and headed south. Instead of the Cape Cod Canal, we opted to head for Boston, 20 nautical miles closer. We hit the big harbor at noon, 24 hours after leaving Port Clyde. Good time, even with a three-hour sleepover at sea.

We had MJ’s college roommate, Julia, over for dinner, hanging on a well-protected mooring off Worlds End. After a good nights sleep, we beat our brains out going dead to windward to the Cape Cod Canal. But that was fun!

We’d later catch up with our Gulf-crossing companions, Fiona and Iain, cruisers from the UK, and hear what a lark the crossing was for them! My hat is off to these seasoned cruisers, one of the strongest sailing couples I’ve ever met. We conferred. I was carrying too much sail and underestimated the conditions we encountered (Iain reported 37 knots of wind at the height).

We’re a tough team, too. My fearless daughter was the best navigating, helping sail the boat, keeping us fed, and never giving in to seasickness – a Herculean effort in itself. And we rallied after our three-hour ‘rest stop’, and had an adventure together that we’ll never forget.

I’m not sure why I got us into that uncomfortable pickle out there on the Gulf of Maine, but there is a deep gouge in the end of our spruce boom where the backstay tried to saw through it. I’ll just varnish over the gouge in the boom and that uncertainty, today.

But from now on, every time I cast off and tension the sail outhaul on the boom, I’ll see the gouge and remember that dark night out on the Gulf of Maine, a wiser sailor now. 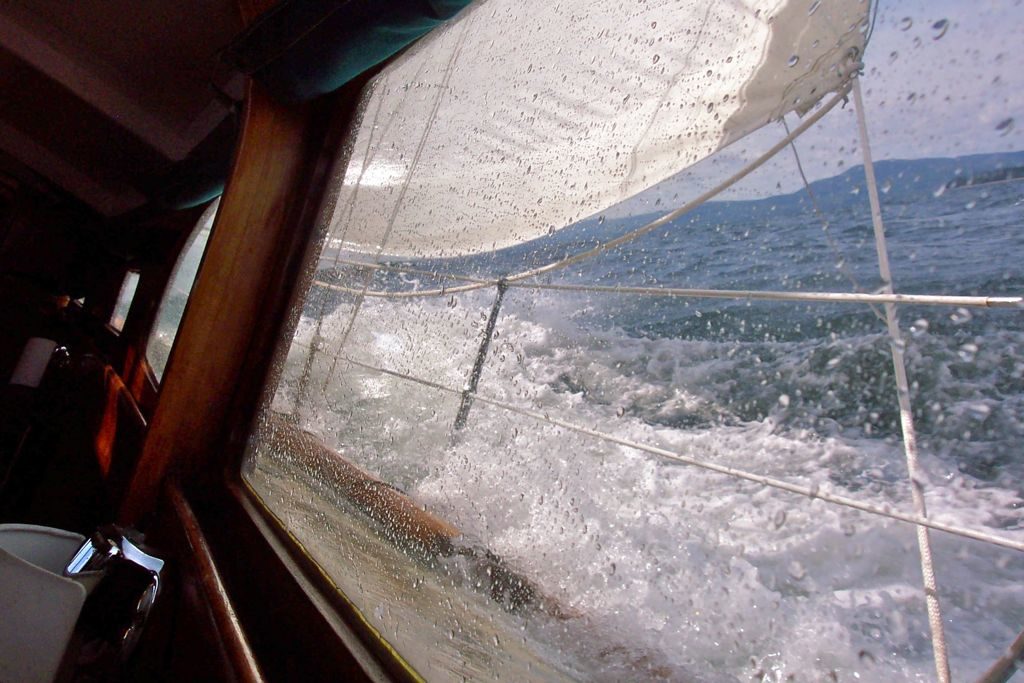 Heading out into the Gulf of Maine overnight is always exciting.

Photos of Stormy Voyage to Boston Across the Gulf of Maine 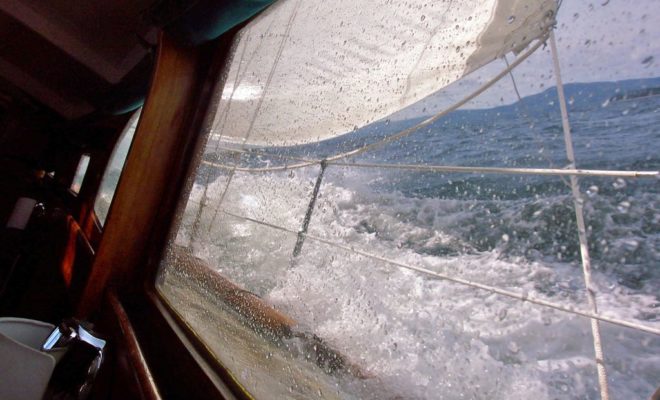 Heading out into the Gulf of Maine overnight is always exciting.