There is a new hazard that unfortunately is becoming more commonplace along the south coast; I’m talking about Fish Traps!

The first time I saw one of these was off Mattapoisett Neck. They now appear off Sakonnet and south of the entrance to Newport.
The traps in Mattapoisett and Sakonnet are close to shore which means you’ll probably be going slow and easily spot them. The problem with the ones off of Newport is that they extend several miles out to sea which means they’re basically in open ocean where you’re likely to be traveling as full cruise speed.
How serious a hazard are these fish trap areas? Serious enough for the Coast Guard Commanding Officer in Newport to issue this warning recently:

Every week, thousands of vessels cruise the waters just south of Newport. Many may catch a brief glimpse of the barrels that appear to be floating atop the swells, however few realize the danger that lurks just beneath the surface. These barrels are in place to mark the many fish traps that stretch from Sachuest Point to Brenton Reef, and can turn a day on the water into a day fraught with peril.
Each boating season, many vessels become hopelessly ensnared in the fish traps and find that without professional assistance, there is little they can do to help themselves. Not surprisingly, becoming tightly bound and immobile can quickly go from an inconvenience to a very hazardous situation. Once stuck tight, a vessel is usually stern to the seas, with the weight of the nets restricting its ability to rise and fall in order to weather the oncoming waves. In this position, it is only a matter of time before the vessel becomes overwhelmed by a breaking swell and begins to sink.

Yep, he said that “it is only a matter of time before the vessel becomes overwhelmed by a breaking swell and begins to sink.”

Although I’ve only noticed them recently, the technique of trapping fish dates back to Ancient Rome.

Fish Trap areas are noted on my Garmin Charts, but they’re rather innocuous, so you have to look for them.
I will say that once you’ve seen one, you’ll find it easier to spot the next one, just be sure to steer clear!

This story is contributed by Dave Horne at My Buzzards Bay (www.mybuzzardsbay.com). Dave reports on Dock & Dine, Cruising, and the Boating Life Style for Southern New England. Please visit My Buzzards Bay for more stories like this. You can read the original article here. 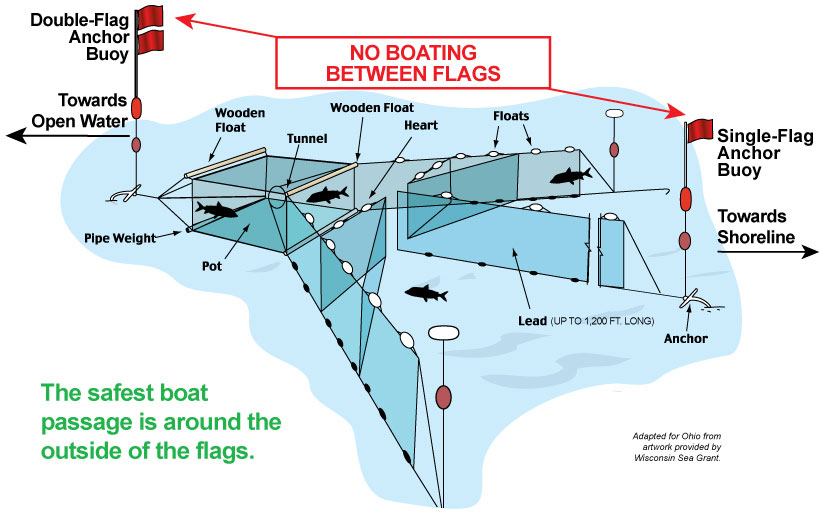 The safest boat passage is around the outside of the flags

Photos of Beware of Fish Traps 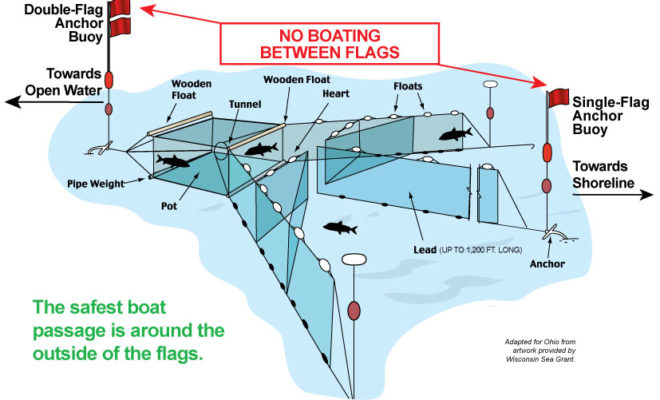 The safest boat passage is around the outside of the flags