Blood, Guts, And Luxury: A Tale Of Two Sportfish

The days of bare-bones, rugged offshore fishing boats are over. Today’s multi-million dollar sportfishing market is making demands like a personal trainer – get stronger and lose more weight! Advancements in materials and construction techniques, such as the vacuum-bagging, high-quality resin-infusion process that is becoming commonplace with today’s boat builders, is creating a stronger, more durable hull and the results can be seen all over the boat. Interior volume is growing, windows are getting larger, speeds of 40+ knots are reached, and fuel efficiency is getting better due to the weight reduction. Today’s production sportfishing yachts (and I use the term production loosely as these boats are very customizable) are giving anglers an edge when it comes to bluewater, competitive fishing with more rod storage, bigger livewells, and greater cockpit space. Somewhere along the way though, building an offshore fishing boat became just as much about the guests’ comfort on board as it did about getting blood on the deck. This juxtaposition between our primal fascination of hunting down prey and the thrilling fight that ensues, while retreating to your oasis of ultra-leather, private ensuite heads, and sub-zero refrigeration, has resulted in anglers having more options to take extended fishing trips with the comforts of a 5-star hotel. Two new models will debut this fall – the Viking Yachts 58 Convertible and the Hatteras Yachts GT59 – both of which epitomize the evolution of what it means to own a sportfishing vessel with these modern day evolutions.

The Viking 58C: The Next Generation Of Convertible Excellence

There’s no question in anyone’s mind who the biggest and baddest sportfish builder has been for the last decade. Viking’s dominance as America’s premium offshore fishing yacht manufacturer has led to some interesting investments in the New Gretna, NJ factory, including a $1 million five-axis profiler which creates foam plugs used to build complex molds. This gives Viking’s “Cutting Edge” technology an entirely new meaning. Over 90% of every Viking is made in-house with the exception of components like the engine, transmissions, electronics, and tuna towers. This unique ability to build the majority of the boat right at the factory gives Viking unrivaled flexibility in the construction of its product as well as a high level of quality control before the new owner takes possession. The advantage is noticeably present throughout the new 58 Convertible, which has had new life breathed into what was once a very popular model for Viking. “From 1991 to 2000, we sold 110 of our 58 Convertibles,” said Viking President Pat Healey. “It was our largest boat at the time and a major milestone for us.”

Eighteen years later, Viking once again is promising to deliver a tournament champion that delivers both hardcore fishing options and a luxurious interior. The cockpit on the 58C is a battle-ready station that is more like a chariot in the Circus Maximus, carrying the gladiators to battle against the beasts that await, while the crowd cheers them on from safety. The 58C has Viking’s signature observation mezzanine which provides guests on board with air-conditioned, comfortable seating above the cockpit that is shaded by the flybridge overhead. The mezzanine becomes a perfect place to watch the chaos of the battle ensuing below in ultra-leather seats with nearby refrigeration for cold drinks. The cockpit on the Viking 58C is 165 square feet with a complete arsenal of fishing equipment like a raised transom box for a livewell, in-deck starboard fishbox, flush-mounted rod holders, and a laminated in-deck backing plate for a future fighting chair. The captain on board is treated to a center-console walk-around command station on the bridge which is outfitted with power-assisted hydraulic steering and an electronic trolling valves. Multiple engine packages are available with hull number one being powered with twin MTU V10 2000 M96L engines at 1,600hp each which propel the 58C to documented speeds of 41 knots.

While all of the aforementioned features are enough to excite any angler, the interior of the 58 Convertible is one of its most attractive attributes. As you enter the salon, there is a convenient, centerline walkway that travels from the aft door to the boat’s forepeak. This wide passageway opens up the interior living area in the galley and salon. With sub-zero refrigeration, comfortable seating around the home theater, and a 3-stateroom layout that includes a huge master cabin, the only thing that is going to bring you back to dock is running out of fuel.

The Hatteras GT59: Designed For Speed, Built For Battle

The re-emergence of the iconic Carolina-style sportfish brand Hatteras Yachts came at the investment of ownership group Versa Capital along with the leadership of newly appointed CEO Kelly Grindle. Combine that with a passionate owner base who loves their Hatteras brand, an energized dealer network, and several new motor yacht and sportfish models being unveiled, and Hatteras is once again a major player in the world of fishing yacht production. The latest creation from the factory in New Bern, NC – the Hatteras GT59 – represents the newest addition to the tournament-winning GT series that has put Hatteras back on the map. “We are building on the success of the Hatteras GT Series and taking it to the next level with the new GT59,” said Hatteras Yachts President Kelly Grindle. “Our customers were asking for a Hatteras GT Series Convertible in the 55- to 60-foot range to round out our line. With this model, we are offering them not only a boat that will deliver the same high level of performance and fishability as the rest of the GT Series, but also one with an updated interior and flexible lower-deck accommodation plans. It’s built for fishing, while also offering the premium fit and finish and amenities of a luxury motor yacht.”

Much like the Viking 58C, the Hatteras GT59 focuses on speed, fishing prowess, and interior accommodations that seem as if they were taken from a luxury motor yacht. The fighting cockpit is slightly smaller at 153 square feet, but the GT59 reaches the same speed at over 40 knots while also being slightly heavier than the 58C. While both models have the option to add a Seakeeper Gyro stabilizer, Hatteras lauds about the GT59’s seakeeping abilities and comfortable ride while at cruising speeds. The GT59 turns with sports car-like maneuverability due to the patented Hatteras hull form and differential steering system. The upper helm is truly a captain’s dream with unprecedented views of the cockpit and areas around the boat for the best fish-fighting experience you can ask for on a boat in this class. Placed in front of the helm is a lounge that conceals a massive storage compartment that can also be turned into a freezer if desired.

Similar to its performance and handling, the interior of the Hatteras GT59 excels as well. The popular 3-stateroom, 2-head layout is remarkably spacious and features a flush-deck salon and galley. Grindle describes the interior as “open (and) free-flowing” allowing “customers to feel comfortable during extended fishing trips.” There is ample storage on board for food, rods, and tackle and owners even have the option of converting the third guest stateroom into an entire storage locker if desired. The Hatteras tradition of building durable, comfortable, fish-raising yachts is alive and the GT59 is well-suited to be the next-generation competitor for the builder from North Carolina.

This story is contributed by Rob Bowman from Bowman Marketing (LinkedIn.com). Rob reports on the sportfishing yacht, trends with luxury motor yachts, and new advancements with long-distance cruising yachts. 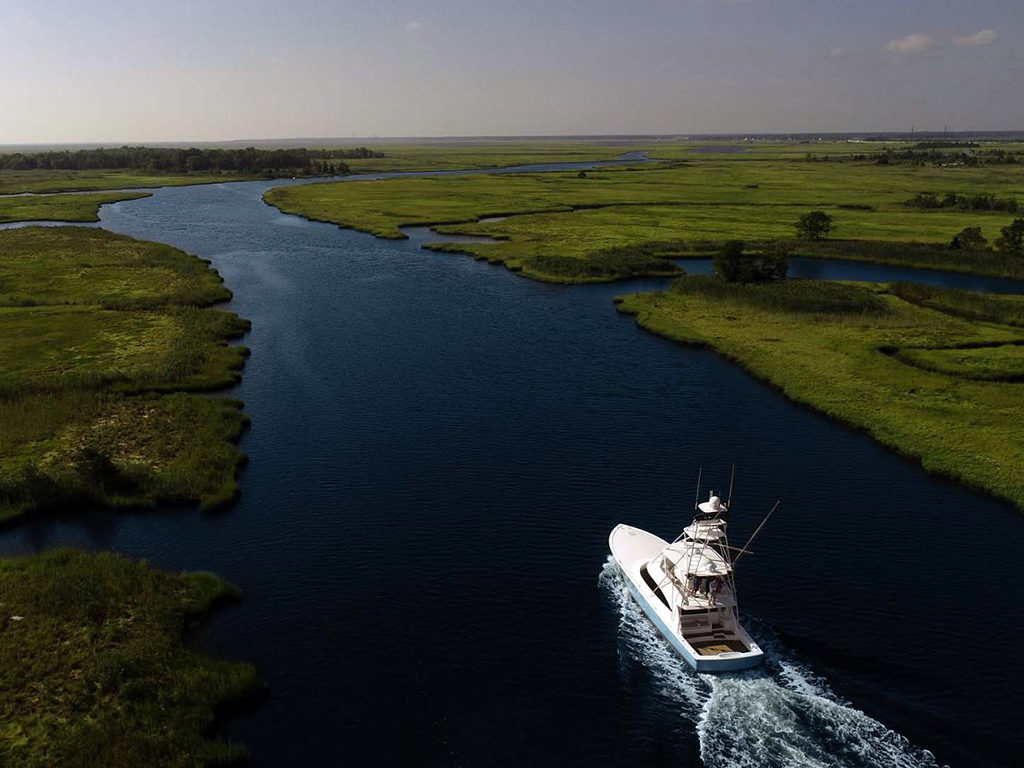 Photos of Blood, Guts, And Luxury: A Tale Of Two Sportfish 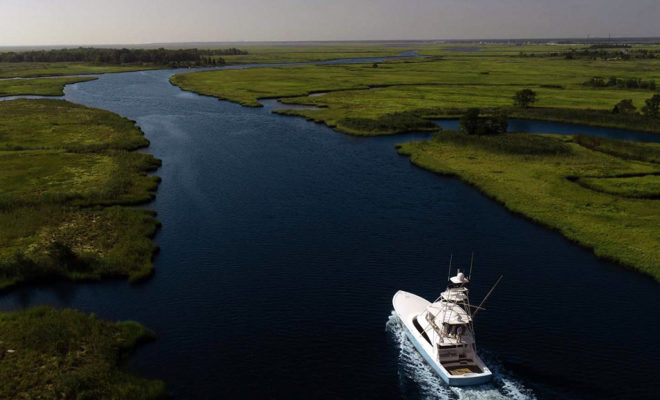 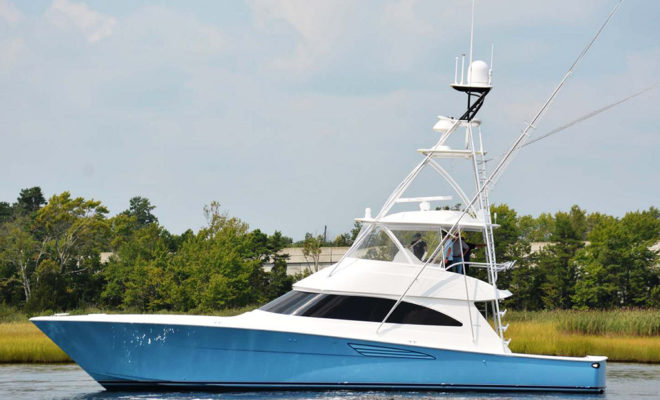 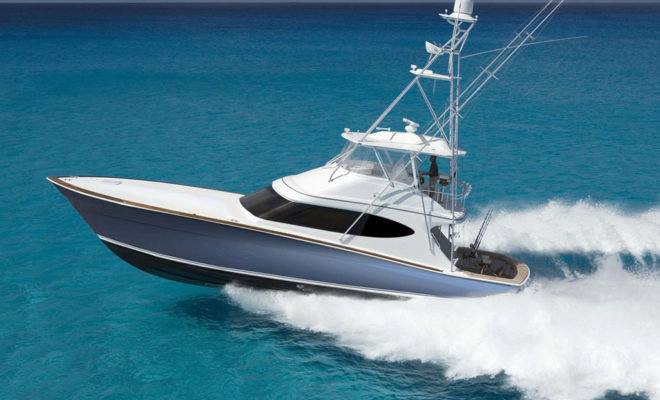