Recently introduced by Chesapeake Light Craft, the boat kit experts, is the Oxford Shell Mark II, a 21-foot recreational rowing shell that can be built from a kit or plans.

CLC’s original Oxford Shell debuted in 1996, was an instant success, and was popular for 22 years. Build-it-yourself boat kit technology has come a long way since then and recently the company introduced the Oxford Shell II, an evolution of the original.

Intended for rec-racing, workouts, or ocean rowing, the Oxford Shell II is 20’10” long and 21” wide (6.35m x 53cm). It weighs 40 pounds. The new boat is pitched a bit more towards speed and performance than the original. Reasonably athletic rowers will be able to use it for training. Experienced rowers will find it a competitive shell for “masters” regattas.

Instead of using a drop-in sliding seat, the riggers and sliding seat are integral. Four toggle clamps release the Wintech riggers in seconds for easier transportation and storage.

Without sacrificing smooth-water speed, the design team took pains to develop a hull that can handle waves and chop. Experienced rowers can keep the Oxford Shell II moving in conditions that would send many recreational shells home.

“When I first got in the boat I was amazed with how light it is. It just picked up right away,” observed CLC’s Nicky Stimpson, a professional rowing coach who has been a major partner in developing the Oxford Shell II. “And then there’s its stability. One of the first things I did was pop both oars out of the water and slide back and forth and this boat gave me no problems at all. I was really excited about just how stable this boat was, especially in choppy conditions. This is like a cork, right over the waves.”

Stimpson, who already has done some racing with the prototype, also is pleased with the boat’s speed.

Taking full advantage of wood-epoxy composite techniques, designers John C. Harris and Dillon Majoros have been able to eliminate features like the “sheer clamp” while creating a more sophisticated and organic hull shape.

With computer-cut “slot-together” parts and an extremely detailed assembly manual, the Oxford Shell II is suitable for first-time boatbuilders.

The complete kit, including the sliding seat, foot stretchers, Wintech riggers and associated hardware, retails for $1889. The boat is also available as plans.

Read more at www.clcboats.com/oxford2, or watch the video below. 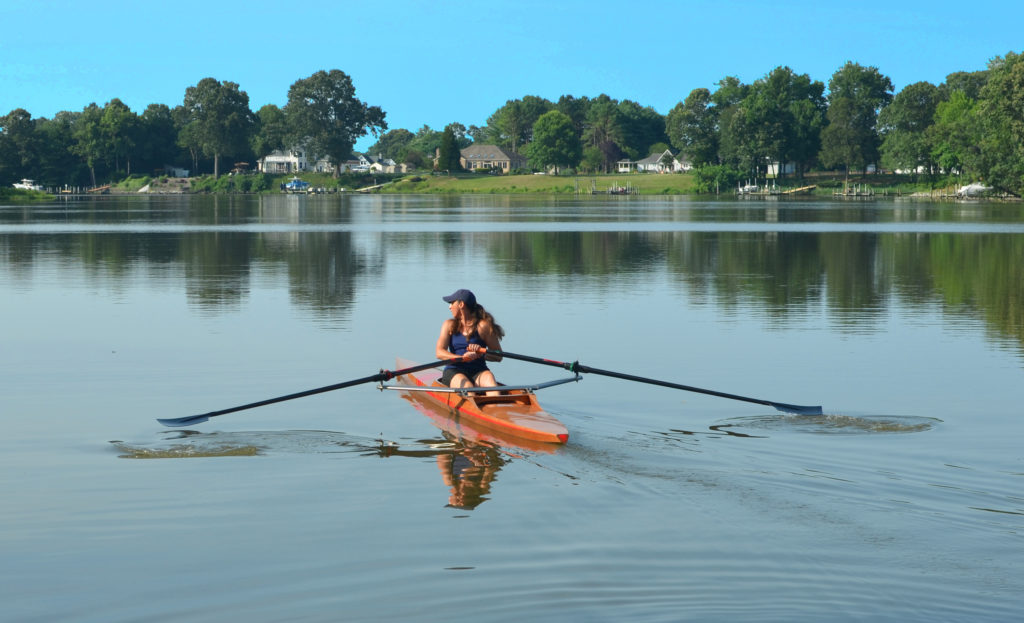