PALM BEACH, FL – The Palm Beach International Boat Show, held yearly in April, is my favorite boat show. Firstly, it’s April after all, my least favorite month in Maine – too early for sailing, sun still a bit low and often cold; and impossible to figure out what to wear! But not in Palm Beach, just grab your tailored shorts, crisp white button down shirt and some fancy loafers and hit the docks in West Palm. Smaller by far than Miami, and not as Euro-centric (or prone to hurricanes) as Fort Lauderdale, Palm Beach is the perfect venue. Thursday and Friday are the best days, typically a bit quieter and vendors are not yet talked out as they are towards the end of the weekend.

This year, the main tent had all the latest electronics, engines, and gadgets any gearhead could get excited about. And there were all the usual suspects for boat owners who might be considering a new radar, dingy or upgrade to their galley. The majority of the land space not under a tent however, was devoted to outboard boats – and a few classic inboards like Garwood and Chris Craft. If you don’t already know this, there are more center consoles out there than you can imagine. The biggest center console manufacturers were in the water-with their triple 425’s on the stern (when did so much power become the norm?) 20 rod holders and a ridiculous array of speakers.

For me the new boat company this year was PARDO. From the Cantiere del Pardo, where Grand Soleils are built, comes a distinctively European, very cool, motor yacht with Volvo IPS drive and to my mind very well conceived design on the three different models (38, 43, 50). Their logo looks much too close to Prada, the luxury Italian brand who also boasts America’s Cup contenders, but I guess that is their fight.

Hinckley showcased its new Sport Boat 40c, and in model form the 40x. Both have outboards (yes triples), which just feels like the right boat to sell now. MJM led with their 35z and now the 43…not sure if it is a certain nostalgia for outboards or lower maintenance costs, but for the past several years the number of outboards seems to increase exponentially. And, in case you are curious, in the main boat show there was one, yes a solitary one, sailboat.

Palm Beach, like the other boat shows, had a brokerage show – there were some spectacular boats….my favorite, a utterly unlikely Dutch style sailboat with lee boards (well one lee board, they lost the other one somewhere in the Gulf of Mexico) built by Feadship for an American in 1955. The best tours of the big boats are always given by the captains and engineers – the people who really know the boat. So smile at the people wearing epaulets and standing on the gangway.

My favorite gadget was the Jupiter foldable electric bike, maybe I just like all the colors it comes in, but how great to have a bike that small to check out a town or island as you are cruising. My runner up is a very cool inflatable platform you could use off your boat, for added space or off your dock, made by Solstice…its primary purpose is to enable huge yachts to deploy more of their toys – jet skis, paddle boards etc for charter guests.

Unlike the Consumer Electronics Show, no one in the boat show world raises a ruckus at the legions of young, female models wearing identical nautical outfits identifying them with a specific brand (and not knowing much about the product). That is just part of the boat show culture – which brings me to my favorite part of the boat show…the people watching. While it is good on the docks and around West Palm, it is even better on the island. Be sure to take a stroll on Worth Avenue, and don’t take my stool at Buccan where I have a standing date with another woman in the industry, we wear our highest heels – the ones you can’t wear on the dock – and try and look the part as we sip martinis, check out the clientele, and laugh. Feeling lucky to just pretend to be Palm Beachers for a night.

Martha Coolidge is based in Rockland Maine where she operates Martha Coolidge Design – a modern design studio that bridges the areas of architecture, yacht styling and interior design. 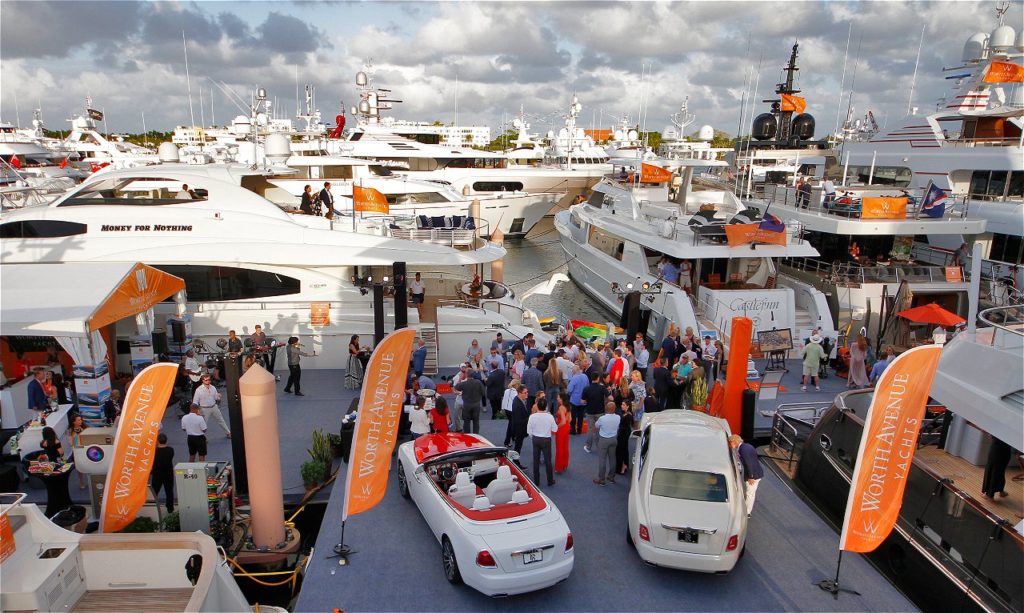