As this is written we are on the third day of another dry nor’easter. Boats have not been out on the ocean or bay since Monday and may not get out until Saturday. What they will find is anybody’s guess.

Prior to the blow, the bay was producing white perch, catfish and short rockfish from Augustine Beach to the fishing pier at Woodland Beach. The tidal rivers and creeks all the way down to Indian River had the same report. Bloodworms and cut bait have been the best offerings. In some locations, peeler crab has worked even better.

The Brandywine Slough was producing flounder on squid, minnows and Gulp!. Flounder were also taken from the Lower Bay reef sites. Jigs with Gulp! have worked well over the rough structure on the reef sites. Kings, spot, blues, croaker and blowfish are also on the reef sites and will hit bloodworms, sand fleas or clam. They will also take FishBite imitations of the same baits. 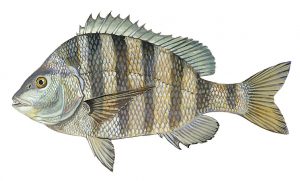 The Outer Wall and the Ice Breakers hold sheepshead and triggerfish. Sand fleas have been the top bait for these fish.

The fishing pier at Cape Henlopen State Park saw a decline in spot catches during the storm, but flounder increased due to the mullet run. The flounder keepers caught in a day may still be counted on one hand, but at least there are keepers to be caught.

The Lewes and Rehoboth Canal and the Broadkill River still produce the occasional flounder and rockfish. Gulp! minnows and squid work on the flounder while live eels seem to attract the rockfish.

On Monday the sea bass and triggerfish action was outstanding, but we will have to see what happens after the nor’easter passes by. Bottom fishing was red hot after the hurricane and we hope it will be the same after this storm.

It was all tilefish and dolphin before the blow. One boat out of Indian River Marina did and overnighter and brought in three yellowfins and a swordfish.

I fished the inlet on Tuesday from 6:45 until 9:00 AM. The current was running in, the rips were making up well, but no birds were working and no fish were biting. There were at least a half dozen other anglers there on the north side on either side of the bridge and I saw no fish caught. Everyone I saw was tossing some type of metal lure.

I did speak to one gentleman who was coming in as I was arriving. He had fished the jetty during the night and said he caught several rockfish on shads. None were large enough to keep. Made me recall my nights on the jetty. Reminded me those nights are way in the past.

I have had a very few reports of flounder caught out of the inlet. Not enough to even hint at a preferred bait or lure.

Massey’s Ditch has seen some flounder caught from the fishing pier and from boats. A few sheepshead have been hooked on sand fleas from the pier.

After I left the inlet on Tuesday, I went up on Three Rs Road. I decided to fish for pompano since I have never caught one in Delaware or from the beach. I was using FishBite sand flea and bloodworm on a top bottom rig with the smallest circle hooks I have. I kept getting tiny taps and missing the fish. On my last cast at noon I finally hooked and landed my first Delaware pompano and my first from the beach.

The surf has been very rough and difficult if not dangerous to fish. It will be interesting to see what we have once the seas settle down and the mullet run gets into high gear.

The cooler weather should get the bass into a feeding mood and the ponds should begin to clear with this dry spell. Red Mill Pond is still Green Mill Pond, but that does not seem to bother the fish.

Last week a fisherman was lost from the jetty at Manasquan Inlet in New Jersey. I don’t have all the details, but back in the day when I fished the jetty at Indian River Inlet, I saw some folks take some pretty bad falls.

One fisherman stepped between the rocks, slipped and his leg snapped in two. The firemen took him off in a Stokes stretcher. Another had his feet washed out from under him and he landed flat on his back on the rocks. He did make it off the jetty under his own power.

If you are going to fish on the rocks, you must wear some type of special footwear. Korkers are the standard these days and they are great. Since I no longer fish the rocks, I gave my pair to my son Roger who does fish the jetties in New Jersey.

Besides falling you have to be aware of the waves. We always followed the falling tide out and then came back in as the tide dictated. On occasion we made a miscalculation. On one occasion a friend and I found ourselves on the end on the south jetty long after the tide had washed over the rocks making it impossible for us to walk back.

At this point the only choice we had was to let a wave wash us into the ocean and then swim back to the beach. Not as easy as it may sound. We had our rods and a stringer of bluefish to carry, but both of us made it back.

I also had the experience of saving my, at the time, brother-in-law. We were fishing at night on outgoing water and I knew he was to my left on the south jetty. I heard a splash and saw a white rod going by. I grabbed the rod and found my brother-in-law attached to the end. I managed to extract him from the water and he never did explain exactly how he managed to fall in.

If I was still fishing the jetty, I would wear my PFD. You never know when you might fall in and there might not be anybody around to pull you out.